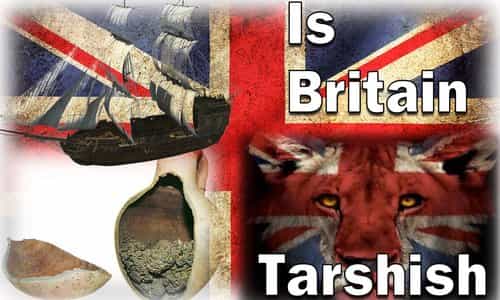 By Bill Salus/Prophecy Depot Ministries July 12, 2016
Share this article:
BREXIT, Britain's vote for departure from the EU on June 23, 2016, has caused some prophecy buffs to question their end times thinking about the "REVIVED ROMAN EMPIRE" in Bible prophecy.

In the immediate aftermath of BREXIT, I authored an article to address this concern entitled, BREXIT: The Biblical Perspective for the UK, US and EU.
The article explained why Britain's exit from the EU has prophetic implications for Ezekiel 38 and why this exit is related to Ezekiel 38 instead of the Daniel 2 and 7 prophecies concerning the Roman Empire.
This article provides more detailed reasons as to why.
IS AMERICA IN EZEKIEL 38?
This commentary unpacks Ezekiel 38:13 to unmask the mysterious modern day identities of ancient Tarshish and their young lions, or "villages" in some translations. Additionally, it examines their specific roles within the prophecy.
If Tarshish is the UK and the young lions are partially represented by the USA, then the ramifications for the future of America are staggering!
Ezekiel 38 and 39 involves at least fourteen participants in the prophecy. They are;
1.) The Victor: God.
2.) The (intended) Victim: Israel.
3.) The Invaders: Magog, Meshech, Tubal, Persia, Ethiopia, Libya, Gomer, and Togarmah. (Refer to the Ezekiel 38 map image below to find out the modern day equivalents).
4.) The Protestors: Sheba, Dedan, the merchants of Tarshish and their Young Lions. 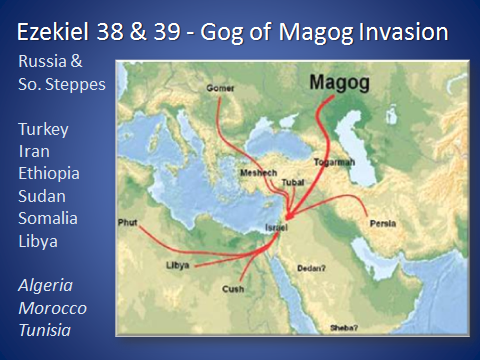 What About Tarshish Today?
Ezekiel 38:8, 16 notifies that this is a prophecy that finds fulfillment in the last days. Ezekiel 38:13 places Tarshish in the epic event. Since these appear to be the last days, then it's safe to say that ancient Tarshish has a modern day equivalent.
This logical deduction applies geographically in the world, and geo-politically in the Middle East. Furthermore, Tarshish and their young lions have a relationship with Israel in this prophecy.
This beckons the questions, what nation or nations have played instrumental roles in modernity in the Mideast? What countries have been interacting with Israel the most since its rebirth in 1948?
This seemingly rules out Spain as Tarshish and the Latin American countries as the young lions.  The Spanish Empire was a dominant world influence in between the late 15th century until the early 19th century.
During that time, Spain shared the global power struggle with the Ottoman Empire, which controlled the Middle East between 1517-1917. Today both empires have faded from their former glories and neither has much influence in the geo-political affairs of the Middle East in general and Israel specifically.
Around the end of the 18th century, the second rise of the British Empire began. At its height it was considered the largest empire in history. No other nation in history created as many colonies (young lions).
The empire grew so rapidly that it became characterized by the phrase, "the empire on which the sun never set." By 1922, the British Empire held sway over about 458 million people, one-fifth of the world's population. Moreover, the empire covered more than 13,000,000 square miles, almost a quarter of the Earth's total land area.
The Ottoman Empire's control over the Middle East ended with its defeat in World War I. Subsequently, Britain and France took sovereignty over the territory. When Israel was rebirthed in 1948, it was Britain, rather than Spain, that controlled the subject territory, which at the time was called Palestine.
young lionsPresently, America, not Latin America, is playing a young lion's role in the Mideast. In 1979, the USA was instrumental in brokering a peace deal between Israel and Egypt with President Jimmy Carter, and again in 1994 with Israel and Jordan by President Bill Clinton.
It seems as though today, Britain, as Tarshish, is now playing a subservient role behind the young lions of America in important geo-political issues of interest to Israel. On the other hand, Spain and the Latin American countries are not involved much at all in Mideast matters.
Conclusion
I am convinced that the majority of biblical, historical, archaeological, geographical and geo-political arguments for the identity of Tarshish and their young lions favor Britain and America.
My conclusions are also based upon a thorough examination of several respectable commentaries that clumsily attempted to connect Tarshish to Spain. In my estimation, the arguments I uncovered in favor of Spain were easily refutable.
In the end analysis, BREXIT seemingly paves the way for the fulfillment Britain's role as the "Merchants of Tarshish" in Ezekiel 38:13. The UK is now free to act independently from all future EU governing decisions.
BREXIT further implies that Ezekiel 38 is about to happen. I provide several reasons why the Revived Roman Empire of Daniel 2 and 7 follows after the fulfillment of Ezekiel 38 in my related article called, BREXIT: The Biblical Perspective for the UK, US and EU.
If Britain and the USA are mentioned as mere protestors in Ezekiel 38:13, then this should trouble Americans. Why does the greatest superpower that ever existed seem to abstain from fighting alongside Israel at this critical point in its future? We are presently Israel's greatest ally!
The USA, in the past, has consistently voted pro-Israel in the United Nations, even when it was unpopular to do so. We provide Israel with state of the art weaponry and other forms of foreign aid.
As of June 15, 2015, Israel is the largest cumulative recipient of U.S. foreign assistance since World War II. To date, the United States has provided Israel $124.3 billion in bilateral assistance.
Why does the USA seem content to remain on the sidelines when Russia and its hordes invade Israel? Is it because America declines from superpower status between now and Ezekiel 38? Britain already has!
In only seventy years, between 1920 and 1990, in the midst of Israel's rebirthing process, Britain collapsed as a world superpower. Now the sun always sets on the British Empire. Today the UK only spans 94,058 square miles and has a population of only about 64 million.
It's easy to see why Britain, as Tarshish in the prophecy, would tremble at the thought of fighting against the Magog coalition.  But what about the USA? Is America following in Britain's same failed footsteps?
Will America turn its back on God and Israel, like Britain did when it failed to enact the Balfour Declaration, which was drafted in 1917? Britain's failure to provide territory for a Jewish State at the time contributed to the extermination of approximately 6 million Jews in World War II!
Will America's decades long push to divide the land of Israel into two states have the same consequences?  Is this type of anti-biblical geo-political behavior one of the reasons that America is portrayed as cowardly young lions in Ezekiel 38:13?
Joel 3:2 says that one of the reasons God judges the nations is for dividing his land. In modernity, America is at the forefront of attempting to divide God's land.
This article will hopefully encourage American readers to prepare for the strong possibility that their country is headed for a potentially steep and severe decline!
Originally published at Prophecy Depot Ministries