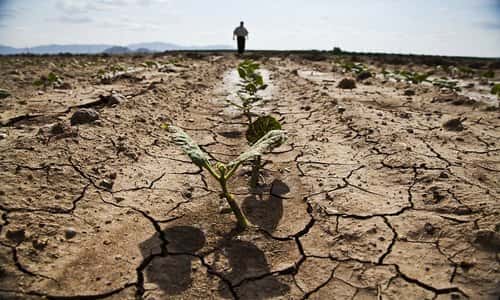 By Michael Snyder/Economic Collapse Blog July 26, 2021
Share this article:
At a time when food prices are already rising aggressively, agricultural production in the United States is being absolutely devastated by a drought that many are calling "the worst" in American history.
Once again this week, the latest U.S. Drought Monitor map has extremely bad news for us.  In all the years that I have been writing, we have never experienced anything like we are experiencing right now.
As I write this article, 100% of the state of California is in a state of drought, and you should care very much about that because California produces about a third of our vegetables and about two-thirds of our fruits and nuts.  Of course it is not just California that is facing an unprecedented nightmare right now.
At this point, drought is covering more territory in our western states than we have ever seen before...
Record-high temperatures in the Pacific Northwest and other parts of the West Coast along with prolonged drought in those areas and the Upper Midwest are stressing crops and livestock and raising concerns about irrigation supplies as conditions persist.

The US Drought Monitor as of July 13 showed 100% of all states west of the Rocky Mountains and most of the Upper Midwest region in some level of drought. California, Oregon, Arizona, Idaho, Utah and North Dakota were nearly 100% severe drought or worse (with extreme and exceptional the most severe). Washington, Montana, South Dakota, Minnesota, New Mexico, most of Wyoming and western Colorado all were in moderate or worse drought.
2020 was a bad year, but at this time last year only about 20 percent of the West was experiencing "severe drought".
Today, that number is up to 80 percent...
Nearly 80% of the West, including North and South Dakota, is in severe drought. That percentage is even more staggering when compared to the 20% of the region that fell into the severe drought range this time last year.
Let that number sink in for a moment.
This is a historic disaster of epic proportions, and it is starting to have a dramatic impact on agricultural production.
For example, the amount of spring wheat is projected to be 41 percent below the level that we witnessed in 2020...
The USDA's initial spring wheat other than durum production forecast for 2021 was 344,575,000 bus, down 41% from 2020 and the lowest since 205,460,000 bus in 1988. Average yield was forecast at 30.7 bus an acre, down 37% from 2020 and the lowest since 2002. Although 2021 spring wheat planted area was down 5.5% from 2020, harvested area was down 7%, suggesting a larger number of abandoned acres.
Other crops are being hit even harder.
According to Bloomberg, the U.S. oat crop will be the smallest that we have seen since records began in 1866.
That isn't a typo, and I didn't mean to say "1966".
For thousands upon thousands of U.S. farmers, 2021 is going to be an absolutely disastrous year with very little production at all.  At one farm in Minnesota, the owner is estimating that he "will not be able to harvest hardly anything" from the 2,500 acres of corn that he planted...
At Schiefelbein Farms, the hayfield should be knee-high by this time of year. Instead, it's sparse and barely ankle-high.
Schiefelbein estimates they have about 75% less hay this year. Out of their 2,500 acres of corn, they will not be able to harvest hardly anything.

So what are we going to do if there is not enough food to go around?
You might want to start thinking about that.
Up in Canada, farmers are saying that the unprecedented "heat dome" that we just witnessed literally "cooked" a lot of the fruit while it was still on the branches...
Fruit growers in the province of British Columbia (BC) said the heatwave reportedly "cooked" fruits while still on the branch. BC Fruit Growers Association (BCFGA) President and orchardist Pinder Dhaliwal told the Canadian Broadcasting Corporation: "It seems like somebody took a blowtorch to [the fruit] and just singed it." He described the cherries affected by the heatwave: They became brown in color, with burnt leaves and dry stems.
According to Dhaliwal, 50 to 70 percent of cherry crops were damaged in the heatwave. He added that apples, apricots and other stone fruits also reported damage - albeit to a lesser degree. "The overall financial impact is going to be great on the farmers," Dhaliwal said.
But the corporate media is telling us that everything is going to be just wonderful, and so we should probably just stick our heads in the sand and ignore this sort of thing.
Personally, I don't understand why the federal government is not taking action.  As global weather patterns go completely nuts, other national governments are starting to step up to the plate.  For example, just check out what has been happening in Dubai...
As mother nature hasn't helped till now, Dubai has come up with its very own way to create rain as it grapples with a 50C heatwave.
The city in the United Arab Emirates (UAE) has come up with drone technology that "shocks" clouds into producing rain.

It is part of multi-million efforts to tackle the blistering weather and bring up the meagre average of just four inches of rainfall a year in the Middle Eastern country.
We have similar technology.
So why aren't we using it?
Somebody needs to ask the Biden administration that question.
As it stands, we are heading into a real nightmare.  Food prices have already been getting very painful, and a billionaire that is in the food business just told Fox Business that he is expecting "10% to 14% food inflation by October"...
Businessman John Catsimatidis expects 10% to 14% food inflation by October.
Catsimatidis -- the owner and CEO of Manhattan-based grocery chain Gristedes Foods -- told Fox Business that Americans can expect higher prices for basic expenses in the coming months.
"We're both in the food business, and we're in the oil business. Food prices are getting higher, and we expect even more increases by October," he said. "We're seeing anywhere from 10% to 14% by October 1. It's a real number."
I think that he is right on the money, but this is just the beginning.  There will be much more pain in 2022 and beyond.
Food prices are never going to be lower than they are right now, and so if you can afford to stock up I would strongly recommend doing so.
Scientists are assuring us that we are in a multi-year "megadrought", and they are telling us that there is no end in sight at this point.
This is an absolutely huge story, and unfortunately we are still only in the very early chapters.
Originally published at Economic Collapse Blog - reposted with permission.