China's Next Step To Challenge The US - Digital Currency 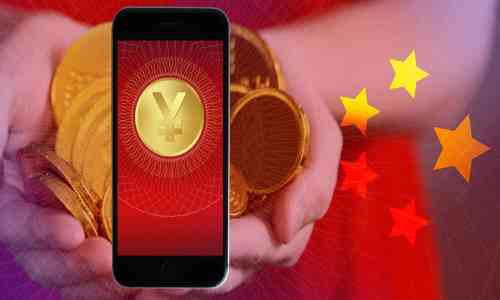 By Judith Bergman/Gatestone Institute August 02, 2021
Share this article:
Communist China is adding another element to its toolbox of surveilling and controlling its population. Already known as the country in the world with the most pervasive surveillance and social credit system, China has now created a digital currency, the digital renminbi or yuan -- also known as Digital Currency Electronic Payment (DCEP) -- to ensure that hardly any transaction goes unregistered.
Unlike cryptocurrencies such as bitcoin, which are not issued by governments and therefore cannot be used as means of payment in most daily transactions, China's digital currency is issued and controlled by China's central bank.
According to the Wall Street Journal, the currency "is expected to give China's government vast new tools to monitor both its economy and its people. By design, the digital yuan will negate one of bitcoin's major draws: anonymity for the user." Many people preferred to buy bitcoin because it was anonymous. But now it has a competitor.
"DCEP is the antithesis of Bitcoin. The ultimate goal of a cryptocurrency is the separation of money and state," said Stewart Mackenzie, a cryptocurrency expert based in Hong Kong. "It's easy for them to say that it's like Bitcoin when it's worlds apart."

The real purpose of the new digital currency, however, seems to be to challenge the long-standing global reign of the US dollar. "China must brace for a full-blown escalation of the struggle with the United States and prepare to gradually decouple the Chinese yuan from the US dollar," Zhou Li, a former deputy director of the Communist Party's International Liaison Department wrote in July 2020. "By taking advantage of the dollar's global monopoly position in the financial sector, the US will pose an increasingly severe threat to China's further development."
China has been working on the digital yuan since 2014 and launched it as a pilot project in four Chinese cities last year. The digital currency has since been expanded to 10 cities and provinces covering 100 million people, where the pilot has been conducted in the form of lotteries.
In Shenzhen, for instance, the government gave away a total of 10 million yuan (about $1.5 million) to about 50,000 people, which they could then use with 3,000 local merchants after downloading a digital renminbi app.
Shenzhen is home to some of the country's biggest tech giants, such as Huawei and Tencent; Walmart reportedly also participated in the pilot project. Another Chinese e-commerce company, JD.com, as part of the project, paid its employees with the digital yuan. There are reportedly also plans to have foreign athletes and visitors at the 2022 Beijing Olympics use the digital yuan as a means of payment.
Most recently, it has been reported that China will hand out 40 million renminbi ($6.2 million) of its digital currency to citizens in Beijing in a lottery; that it is testing the digital yuan in Hong Kong, and that it recently rolled out more than 3,000 ATMs in Beijing where people will be able to convert digital yuans to cash and vice versa.
China is denying that launching the digital yuan is fraught with hidden agendas, such as challenging the dollar. "For the internationalization of renminbi, we have said many times that it's a natural process, and our goal is not to replace US dollar or any other international currency," said Li Bo, a deputy governor of the People's Bank of China. "Our goal is to allow the market to choose."

"Some foreign media outlets recently associated the process with geopolitics, assuming that the PBC [People's Bank of China] plans to establish a new global financial configuration by issuing DC/EP [digital currency/electronic payment]," the Chinese Communist Party's (CCP) Global Times wrote recently.
"Some even jumped to the conclusion that the Chinese government deems the issue and control of a sovereign digital currency as a 'new battlefield' of national competition. In fact, the PBC's decision is merely a necessary move to comply with the inevitable trend of global currency development.
From material objects and precious metals to paper notes and the digital currency in the future, pursuing simpler and easier payments is an unstoppable trend of monetary and financial development."
The CCP, however, has an unfortunate history of not adhering strictly to its own pledges. In 1984, it pledged that Hong Kong's autonomy, including its rights and freedoms, would remain unchanged for 50 years under the principle of "one country, two systems" after the territory's 1997 return to Chinese sovereignty.
By June 2020, however, when the CCP introduced its national security law in Hong Kong, it had reneged on its pledge. The CCP continues to crush Hong Kong. Last week, the CCP arrested Ryan Law and four other senior editors and executives of Apple Daily, a Hong Kong newspaper dedicated to promoting democracy. The paper's founder and owner, Jimmy Lai, 72, is presently serving a 20-month prison sentence.
The CCP further broke its 2015 commitment not to militarize artificial islands that Beijing had been building in the Spratly Islands chain in the South China Sea, and it has never honored at least nine of the commitments it made when it joined the World Trade Organization, to name just a few instances.
This list of broken pledges does not even include the lies that China told the world about the supposed non-transmissibility of the Coronavirus, which originated in Wuhan and has so far taken nearly four million lives and ravaged countless economies.
Despite the CCP's protests to the contrary, there seems to be little doubt that China sees its new digital currency as a crucial element in the competition to become the world's dominant technological power: The new digital currency is part of the CCP's ambition, as laid out in its new Five-Year Plan for the years 2021-2025, to digitalize China.

The digitalization, in turn, is part of China's ambition to become technologically independent of the West and to dominate global tech and overtake the US as the world's dominant power by 2049, the 100th anniversary of China's Communist Revolution.
China's Five-Year Plan mentions blockchain technology:
"We will foster and strengthen emerging digital industries such as artificial intelligence, big data, blockchain, cloud computing, and cyber security..."
The Proposal of the Central Committee of the Chinese Communist Party on Drawing Up
the 14th Five-Year Plan mentions "digital currency development":
"We will develop the digital economy, promote digital industrialization and industrial digitalization, promote the deep integration of the digital and real economies, and create internationally competitive digital industry clusters... Construct a modern central bank system, refine money supply management mechanisms, safely promote digital currency development..."
Crucially, China's new digital currency, in addition to increasing state control and surveillance in China, as well as challenging the US dollar, could affect the ability of the US and other countries to level sanctions at the Chinese government for its human rights abuses and other breaches of international law. According to Sahil Mahtani, writing in American Affairs Journal in April:
"... a groundbreaking digital currency launched by China's central bank is likely to create a parallel pay­ments network--one beyond American oversight--thereby crippling U.S. sanctions policy. This devel­opment will compromise U.S. power around the world, and therefore should attract interest from more than the usual suspects who obsess over digital currencies...
"The expansion of a Chinese digital currency will ultimately pry open the U.S. grip over global payments, and therefore compromise U.S. sanctions policy and a significant measure of U.S. power in the world...
"It is not that China's digital currency is going to become the dominant standard of payments ... But it could become one standard, creating a parallel system with which to avoid the long arm of U.S. regulation."
The US, on its part, does not appear ready for China's challenge over the future of money. Jerome H. Powell, the chair of the Federal Reserve, said in March that at this stage the Fed was only looking into whether there is even a need for a central bank digital currency.
He also said that U.S. officials would only consider issuing a digital dollar if they believed there was a clear use and if the idea had widespread public and political buy-in, according to the New York Times. "Does the public want, or need, a new digital form of central bank money to complement what is already a highly efficient, reliable and innovative payments arena?" said Powell.
"Not only are the American monetary authorities underestimating the threat posed to dollar dominance by China's pioneering combination of digital currency and electronic payments," wrote Stanford Professor Niall Ferguson recently. "They are also treating the blockchain-based financial innovations that offer the best alternative to China's e-yuan like gatecrashers at their own exclusive party."
Originally published at The Gatestone Institute - reposted with permission.