What Happens When The Debt Comes Due? America Faces Day Of Reckoning 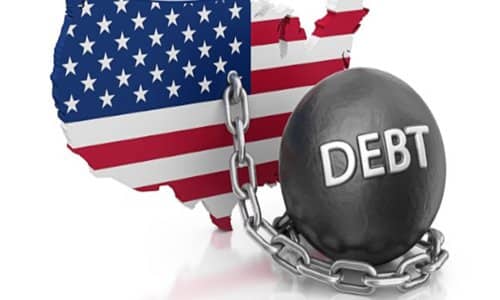 By Stefan Gleason/Activist Post August 06, 2021
Share this article:
What happens when the debt comes due?
It's a question millions of Americans are grappling with in their personal finances. It's also a multi-trillion dollar question facing officials in Washington, D.C.
How they decide to answer it - or evade it, as the case may be - will have profound implications for investors and anyone who holds U.S. dollars.
For months, the financial media has been running stories about how the pandemic led to a surge in savings. The U.S. consumer, thanks to a host of government supports including stimulus checks, student loan debt relief, and eviction and foreclosure moratoriums, is supposedly in great shape.

Why, then, are Americans taking on new debt at the fastest pace in over a decade?
The Federal Reserve reported this week that household debt surged during the second quarter by the most in 14 years. Much of that is represented by mortgage debt as buyers take on ever more in order to be able to buy homes that are rising rapidly in price.
Some perpetual optimists rationalize surging mortgage balances as sign of a strong jobs and housing market - forgetting how badly things can turn out (and did in 2008) when financial system leverage becomes excessive.
It's not just houses people are speculating on with borrowed money. Margin debt at brokerage houses has surged. And according to Fed data, credit card balances grew by $17 billion while auto loans surged by $33 billion in the past year.
All told, Americans owe about $15 trillion - and that, of course, doesn't include their share of the swelling national debt owed by the U.S. Treasury.
Treasury Secretary Janet Yellen announced Wednesday she would be pursuing emergency measures to raise $126 billion and avoid breaching the Congressionally imposed debt ceiling. The government owes $28.6 trillion on the heels of a record a record $3.4 trillion budget deficit.

The Treasury's accounting maneuvers will, for now, avert a disastrous debt default. And, like so many times before, Congress will eventually raise the debt ceiling to enable more Biden administration borrowing - even if it's a last-minute deal passed over the objections of fiscal conservatives.
To expect politicians to ever impose meaningful fiscal discipline on themselves is to ignore all recent history. Regardless of whether Democrats or Republicans happen to be in charge at any given time, the spending never stops, and the debt always expands.
That doesn't mean Washington can continue its fiscally profligate ways in perpetuity without serious consequences.
The ultimate consequence may be a currency crisis as the Fed's own ongoing extraordinary measures of buying up government bonds triggers a slide in confidence in the U.S. dollar itself.
Since Federal Reserve Notes are no longer backed by gold or silver or anything tangible, maintaining their value is literally a confidence game.
Of course, having the world's largest economy and military with global trade conducted mostly in dollars, combined with the IRS's power to tax in dollars, goes a long way toward bolstering confidence that lots of people will continue to need dollars.
Thanks to its privileged position on the world stage, the U.S. has been able to forestall a currency crisis for longer than many sound money advocates would have thought possible.
But as the country's debt rises faster than its GDP and interest rates remain artificially depressed below the inflation rate, the value of the currency has nowhere to go but down.

No emergency accounting maneuvers by bureaucrats will be able to bail the system out from what's coming. All they can do is try to keep kicking the can down the road. But the end of the road may be approaching.
Investors need to be prepared for what happens next.
A sharp rise in inflation has already occurred over the past year as a result of expansionary fiscal and monetary policies.
While Fed Chairman Jerome Powell assures the recent inflation spike is just "transitory," the government's financial predicament is more aptly described as intractable.
There is no political will to stop the deficit spending or pay down the national debt. And there is no way for officials to maintain their growing debt load other than by inflating the currency supply.
The only question is whether they will be successful in engineering a gradual, orderly decline in the value of the dollar... or whether they will one day lose control as the currency collapses.
Originally published at Activist Post - reposted with permission.