Has The Collapse Of Afghanistan Sped Up A Chinese Invasion Of Taiwan? 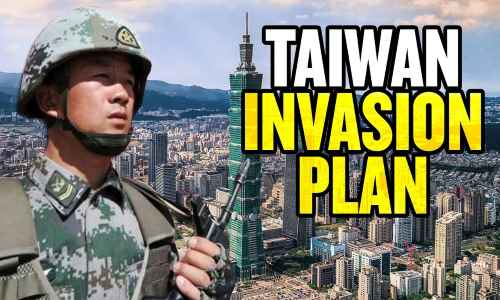 By Michael Snyder/Economic Collapse Blog August 20, 2021
Share this article:
The way that the Biden administration has handled the U.S. withdrawal from Afghanistan is not going to bring peace.  Instead, I believe that it is going to result in more war.
For decades, the overwhelming strength of the United States restrained other major powers from becoming too adventurous.  But now the stunning defeat in Afghanistan has exposed how weak we have become.
The debacle that is currently playing out in Kabul is going to greatly embolden the enemies of the United States.
In particular, Chinese leaders are absolutely loving what they are seeing, and they can't help but express their delight...
Chinese state media, meanwhile, reported on America's "humiliation" in Afghanistan with relish, using scenes of the chaotic US evacuation and swift resurgence of the Taliban as proof of the superiority of China's hands-off approach to other countries' internal affairs.
"The drastic change in Afghanistan's situation is undoubtedly a heavy blow to the US. It declared the complete failure of US intent to reshape Afghanistan," the state-run tabloid Global Times said in an editorial published late on Sunday night. "This defeat of the US is a clearer demonstration of US impotence than the Vietnam War -- the US is indeed like a 'paper tiger.'"
In this instance, the Chinese are 100 percent correct.

The United States really has become a "paper tiger".
Our "woke military" has become a pathetic shadow of what it once was, and even if we had a competent military the brass in the Pentagon would have no idea how to use it because they are completely and utterly clueless.
And this is a huge problem for our friends in Taiwan, because the U.S. military has been the only thing holding the Chinese back from invading the island.
After watching how we abandoned our friends in Afghanistan, the Chinese publicly taunted authorities in Taiwan and warned that we would do the exact same thing to them...
It published an editorial contrasting the U.S. commitment to Afghanistan and its commitment to Taiwan, and concluding that if it "abandoned" Afghanistan, then the ruling pro-independence Democratic Progressive Party (DPP) in Taiwan should "wake up from their dreams."
"From what happened in Afghanistan, they should perceive that once a war breaks out in the Taiwan Straits, the island's defense will collapse in hours and the U.S. military won't come to help," Global Times opined. "As a result, the DPP authorities will quickly surrender, while some high-level officials may flee by plane."
U.S. and Chinese strategists both know that if China decided to invade Taiwan the U.S. military would not be able to prevent it from happening.
But there has always been an understanding that such a move would result in a very strong military response from the United States, and that has always held the Chinese back.
Unfortunately, the status quo may not last for too much longer.

The Chinese can see that Joe Biden is in an advanced state of decline both physically and mentally, and he is surrounded by the most incompetent team that any president has had in modern American history.
The Chinese can also see that the U.S. has lost the will to fight.  We didn't even attempt to delay the Taliban when they came storming into Kabul, and now all we want to do is to evacuate our people and go home.
At this point the Biden administration doesn't want any more foreign wars, most Democrats don't want any more foreign wars and most Republicans don't want any more foreign wars.
So would the American people actually want a military confrontation with the Chinese if they invaded Taiwan?
Probably not.
And would the American people support threatening the Chinese with a nuclear response if Taiwan was invaded?
Definitely not.
But I do believe that the Biden administration would feel forced to come up with some sort of a military response if China invaded, and such a response could result in a state of war between our two countries.
Here in the western world, most people simply do not understand how important taking Taiwan is to Chinese leaders.  To the CCP, Taiwan has always been considered Chinese territory, and reintegrating Taiwan with China is a core issue of fundamental importance.
If Taiwan was successfully conquered, it would bring great national pride, and the leaders responsible would be regarded as legendary national heroes.
The Chinese regard Taiwan as a rebellious province that is run by dangerous insurgents, and they have repeatedly warned that any attempts by Taiwan to formally declare independence will result in invasion.
Of course the people of Taiwan see things very differently, and they have always counted on the United States to protect them.

But now the weakness of the U.S. has been exposed, and the Chinese are becoming increasingly aggressive...
China carried out assault drills near Taiwan on Tuesday, with warships and fighter jets exercising off the southwest and southeast of the island in what the country's armed forces said was a response to "external interference" and "provocations".
Taiwan, which Beijing claims as Chinese territory, has complained of repeated People's Liberation Army (PLA) drills in its vicinity in the past two years or so, part of a pressure campaign to force the island to accept China's sovereignty.
And last month the Chinese actually simulated an amphibious invasion of Taiwan...
The latest drill includes assault landings and island-control exercises in a bid to demonstrate the communist state's military might.
It was conducted as the country is preparing its soldiers in case of an insurgency in Taiwan, Chinese state media reports.
For a long time, I have been warning that the United States and China would eventually go to war.
And it appears that Taiwan could potentially trigger such a conflict.
If Trump was still in the White House, the Chinese probably would not make a move any time soon.
But now they smell weakness.
Biden is weak, our "woke military" is weak, and the American people have no desire for more military conflict.
That makes this an ideal time for the Chinese to try to achieve one of their most important national goals and in the process take control over the largest advanced microchip producer in the world.
Originally published at The Economic Collapse Blog - reposted with permission.