Why Is The National Guard Hiring Internment/Resettlement Specialists? 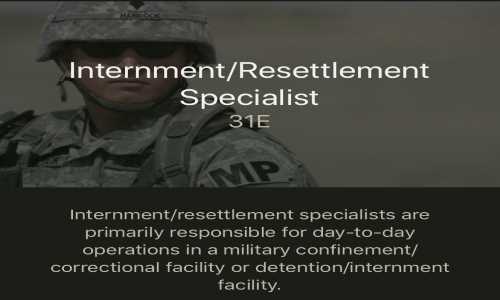 By Jeff Thompson/Organic Prepper August 23, 2021
Share this article:
The National Guard is hiring Internment/Resettlement Specialists.
Let that sink in.
Editors note: the National Guard has now removed the job listing.
However, we have captured the screenshots to validate. The Organic Prepper acquired this link from INDEED posting this position for the National Guard on 08/16/2021.
With Biden's sudden withdrawal from Afghanistan, you might think that is the reason for the resettlement aspects of these listings...except they appeared BEFORE the withdrawal.

What does an Internment/Resettlement Specialist do?
According to the National Guard website:
OVERVIEW
Internment/resettlement specialists are primarily responsible for day-to-day operations in a military confinement/correctional facility or detention/internment facility.
JOB DUTIES
Supervise confinement and detention operations
Provide external security to facilities
Provide counseling/guidance to individual prisoners within a rehabilitative program
Manage and maintain prisoners/internees and their programs
SKILLS LEARNED:
Military laws and jurisdictions
Self-defense and use of firearms
Interpersonal communications skills
Search/restraint and custody/control procedures
WHY is there a need for Internment/Resettlement Specialists?

Job position listings for such **WERE available in the following locations:
Lancaster, California
Washington DC
Denver, Colorado
Edinburgh, Indiana
Monticello, Minnesota
Parkville, Maryland
Asheville, North Carolina
Auburn, New York
Sioux Falls, South Dakota
Rapid City, South Dakota
**Either the National Guard very quickly filled those positions, or someone is attempting to hide something. The links now all state: ZERO JOBS FOUND.
So, why on earth would a military branch primarily designed to remain within US borders need Internment/Resettlement Specialists? (Although we have seen several deployments of the National Guard to the Middle East within recent years.)
Recent historical events to consider
We've witnessed the exponential growth of Big Brother-style surveillance throughout the world over the past two years. Part of this has included developing lists of those willing to get specific papers and those who are not.
The demonization of those refusing to get vaccination papers is ongoing.
We've discussed the very real potential of another lockdown coming this fall. Many didn't comply with the last and, likely, even more, won't abide by any upcoming ones. Just look at the massive protests taking place throughout France, England, and other nations worldwide.
Then the American government created a course discussing how to mass quarantine rural Americans effectively. And, the National Guard began going door-to-door with public health workers to "convince" people to get their shots.
Are more severe measures and "green zones" in our future?

Biden is now floating the idea of banning interstate travel for those who refuse the jab. Another possible measure discussed is changing how the federal government reimburses treatment for unvaccinated patients who become ill with COVID-19.
The CDC recently presented a document for consideration of The Shielding Approach to Prevent COVID-19 Infections in Humanitarian Settings. The document describes the shielding approach:
The shielding approach aims to reduce the number of severe COVID-19 cases by limiting contact between individuals at higher risk of developing severe disease ("high-risk") and the general population ("low-risk"). High-risk individuals would be temporarily relocated to safe or "green zones" established at the household, neighborhood, camp/sector, or community level depending on the context and setting. They would have minimal contact with family members and other low-risk residents.
Furthermore, the CDC's document gives suggestions for effective implementation. For example: It may be necessary to assign someone within the green zone, if feasible, to minimize movement in/out of green zones.
And now the National Guard is looking for "Internment/Resettlement Specialists."
How many times have the rules changed?
First, we heard there was no reason to wear a mask. Then, an N95 with a one-way valve was unacceptable. Later, multiple cloth masks were the key.
Two weeks to flatten the curve was all it was going to take. Now, some argue that it could be years before restrictions are lifted, if ever. Then, if anyone believed that vaccine passports were the next step, they were considered crazy conspiracy theorists. Later, the concept of a passport system was embraced - even by many Republicans.
Denial of hospital care because you refuse particular treatments? Nobody would ever argue for such! Only a short while later, this became a talking point of people in positions of power throughout the world.
Surely the idea of people forcibly being rounded up and sent to camps is ludicrous.
Isn't it?
Now, the CDC is discussing the possibility of "green zones." (aka camps)
What are we to believe is the purpose of Internment/Resettlement Specialists?
Was this just a benign job posting typical for the military to have? (However, as stated before, the National Guard removed the postings.) Or is there something else going on here?
Originally published at The Organic Prepper - reposted with permission.