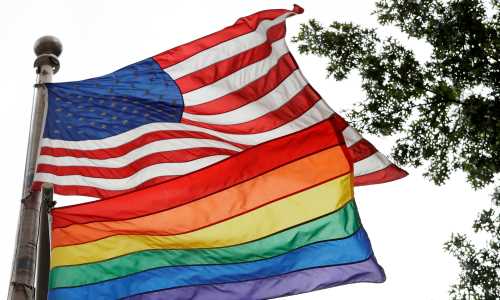 By Jonathon Van Maren/Bridgehead.ca August 26, 2021
Share this article:
As many commentators recently observed, perhaps no two sets of images better contrasted American decline than the U.S. Embassy in Kabul tweeting out the Pride flag to celebrate "LGBTI Month" and the photos and video of terrified Afghans swarming the Kabul airport as American forces abandoned them to the invading Taliban.
One of the little-discussed reasons that "exporting freedom" is such a fool's errand today is that nobody can agree on what, exactly, freedom is. To the woke, freedom isn't just democracy, and it certainly isn't liberalism--it is the destruction of all moral values that inhibit sexual expression. This doesn't go over very well in most non-Western nations.

Cultural colonialism has become a key part of American foreign policy. Exporting abortion overseas is a Biden priority, as it was for Obama. Obama, for his part, was renowned for lecturing African leaders on their close-mindedness on sexual issues.
Nigerian pro-life activist Obianuju Ekeocha wrote about these attempts in Target Africa: Ideological Neo-Colonialism in the Twenty-First Century, detailing how Western leaders used foreign aid to force their sexual values on everything from LGBT issues to abortion on the nations they viewed through post-modern paternalist eyes.
Pre-2000, not a single nation on earth had redefined marriage. Since then, sexual values have become a point of contention between developing nations and the West.
It is an irony that many nations who first heard of Christianity from Western missionaries are now resisting woke Western colonialism that leaders like Joe Biden desperately want to ram down their throats.

Ekeocha details the many clashes that have resulted from this in both her book and a documentary, Strings Attached--a recent example of this came in Jamaica, where Jamaicans protested outside the U.S. Embassy after the Pride flag was raised.
The Biden administration has made flying the LGBT flag a top priority of its diplomatic mission around the world, to condone and promote the homosexual lifestyle.
Jamaica's population is approximately 2.8 million, and about 70% of the population is Christian, primarily Protestant of various denominations.
Same-sex marriage is illegal in Jamaica, as it is in most of the Caribbean.
Originally published at The Bridgehead - reposted with permission.