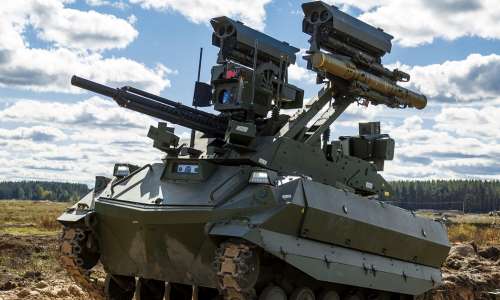 By Tyler Durden/Activist Post September 18, 2021
Share this article:
Russia's military has put its cutting-edge robot armored fighting vehicles on display during the ongoing massive Zapad-2021 exercises with Belarus and other allied countries.
The unmanned ground vehicle -- robot tanks, if you will -- were able to demonstrate combat formations during the exercises, a significant step in the country's quest to develop an effective all-robot military unit
The Ministry of Defense (MoD) released brief footage of the robots being battle-tested during the exercise, with Russian state media describing that "Robotic Russian fighting machines fired anti-armor missiles and let rip with mounted flamethrowers on Monday, while their operators sat in safety away from the battlefield, in colossal drills attended by President Vladimir Putin."

One of the two models in the exercise was the Uran-9 armored fighting vehicle, which looks like a small conventional tank, and utilizes laser sensors to hone in on targets, and can be outfitted with rockets or large guns, and even a flamethrower. During exercises it was able to destroy mock enemy targets over 3 miles away.
The other model is called the Nerekhta combat robot, which has a purpose of going to places near or behind enemy lines where it's too dangerous to send regular infantry forces. One Russian military official described that the Nerekhta is "designed to perform reconnaissance tasks, direct fire on enemy positions, and quickly deliver ammunition and equipment."
The pair of robots unleashed fire on a simulated enemy during the Zapad-2021 exercises. Russia is rumored to have actually deployed robotic fighting vehicles during prior years in the Syria war, though there's yet to be footage or confirmation of this.
In footage released by the Russian military, the robots maneuvering amidst a large battlefield scene looks like something straight out of The Terminator.

The apparently successful use of UGVs during the Zapad exercises underscores Moscow's determination to improve its robotic capabilities, said Alexis Mrachek, a researcher at the Heritage Foundation, a Washington D.C.-based think tank.
"That fact is certainly significant because it means that Russia is continuing to experiment and seeking new ways to obtain greater lethality and survivability," Mrachek said.
"We should expect that with continued experimentation they will perfect their equipment and tactics."
Zapad-2021 kicked off last Friday, and is mainly taking place at over a dozen bases and ranges mostly on Russian and Belarusian soil. Considered the largest joint war games to take place in Europe in decades, it involves up to 200,000 troops - including elite paratroopers - nearly 800 tanks, and 15 warships plus 80 aircraft.
The drills are designed to test the allied militaries' "interaction during combat operations and letting commanders and staff practice troop management during joint actions in repelling aggression against the Union State," according to the MoD, which is a reference to the agreement going back to 1999 in which Russia and Belarus committed to deeper political, military, and economic integration.
Western leaders have viewed the exercises with concern because of their sheer size and proximity to NATO's eastern flank.

Neighbors such as Ukraine and NATO members Poland and Lithuania say such big exercises so close to the frontier risk being provocative.
"We need to realize that a Russian military attack on Estonia may indeed happen in the coming years," Martin Herem, commander of the Estonian Defense Forces said in an interview regarding the exercises.
"Russia's goal likely isn't to occupy us -- it does not want to gain control through occupation, but it enjoys instability and influence via instability."
Here is some footage from the war games released by Russian Media: