The Prophetic Meaning of the Hebrew Year 5782 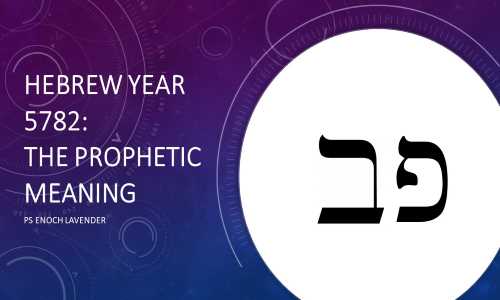 By Enoch Lavender September 20, 2021
Share this article:
The number 5782 may not appear to carry any specific meaning to our western mindsets, however in Hebrew any number correlates with each own Hebrew letters, which in turn carry within themselves a range of meanings. Does the meaning of the year 5782 carry prophetic insights into the year ahead?
Examining 5782 - back to the 80's
According to the Jewish way of reckoning time, we are in the decade of the '5780s' - symbolized by the Hebrew letter Pey(the number 80). The letter Pey symbolizes an open mouth and has to do with our words and our language.
The number '2' in 5782 correlates to the 2nd letter of the Hebrew Alphabet - known as 'bet'.  The Bible begins with the letter 'bet' and the Rabbis have noted that as you read the Bible in Hebrew from right to left, it appears that all of the Scriptures come out of what appears like the open 'mouth' of this first letter bet. Interestingly, the Jewish sages have concluded that the God used the letter bet to create the world and that the entire creation came out of this one letter.

While this idea might seem foreign to us as New Testament believers, it begins to make sense as we understand that this 2ndletter of the Alphabet points us to the 2nd person of the Godhead, the Son of God. The letter bet is used in the word 'ben' meaning 'son', and according to John, the Son was there with God 'in the beginning' and 'all things were made through Him' (John 1:1-3). It seems that the Rabbis aren't too far off when they say that all things were made through the letter bet!
5782: The Mouth + the Son
Applying what we have learned so far, we see that the year 5782 speaks of our conversation and the Son of God. What we keep talking about ultimately reflects the contents of our hearts (Matt 12:34).
Some Christians are currently spending most of their time talking and thinking about Covid. Christians are becoming increasingly divided by conflicting Covid narratives, and behind it all lies an increasing level of fear that is affecting many hearts.
I believe that 5782 teaches us that God wants our conversation to be dominated by faith instead of fear, by Jesus rather than by Covid. But to be able to change the words that we are speaking, we must first change what is filling our hearts and minds. If you are among those whose heart has been affected by fear in the last year, I would encourage you to take time away from the sources of fear in your life (for example secular news media or social media).

Keep reminding yourself instead of how God has protected you in the past, and of His promises to you, and as you make this your habit in the year ahead, I'm sure it won't take long before your heart and mouth are both in a much better place.
The Shmita Year - A Year of Faith
Furthermore, this particular Jewish New Year also marks the beginning of what is known as a 'Shmita year', a sabbatical year of letting agricultural land lie fallow (see Lev. 25:2-5). What lessons can we draw out from the Shmita as we approach the coming year?
The rabbis describe the Shmita year as a year of faith, as they rightly recognize the faith of farmers who choose to rest their land for the entire year. God has promised provision to His people who follow this command (Lev. 25:20-21) and indeed many Israeli farmers can testify of God's miraculous provision in past Shmita years.
One famous example is the story of the Agricultural settlement of Komemiyut in 1951/52. Having kept the Shmita the year before, these orthodox farmers looked to be in trouble as they only had access to moldy, worm-infested seed for the year after the Shmita.
Furthermore, the timing of the Shmita dictated that the Komemiyut farmers had to wait until November to sow their fields. By contrast, the surrounding farms were all sowing their fields in September in anticipation of the usual September rains.

However, that year no rain fell during September nor during the month of October. In November, the Komemiyut farmers sowed their fields, and the very next day the heavens opened! A few months later the result was clear for all to see: the surrounding secular farmers ended up with a lackluster crop, while the religious farmers enjoyed a miraculous bumper harvest.
Today many farmers in Israel are keeping the Shmita, and even secular farmers have been inspired by the story of Komemiyut.
Applying the Shmita
The rabbis don't believe the Shmita regulations apply to non-Jews, however the principle of faith in God and obedience to Him applies to all of us, and especially at this time in history. Messianic Rabbi Jonathan Cahn has written at length about how almost every global financial upheaval of the past century has been connected to the Shmita cycles.
Especially noteworthy is the Great Depression of 1930/31, and the stock market crashes of 2000/2001 and 2008/2009 that all occurred during Shmita years.
Could the year ahead feature further economic turmoil? The financial conditions brought into play through our government's record spending during Covid, as well as the financial down turns suffered by so many businesses, are certainly pointing us to choppy waters ahead.
If there is trouble ahead, then a very natural human approach is to respond in fear and try to protect ourselves. Yet the Shmita teaches us a different lesson. It teaches us to simply trust God and follow His commands, and as we do, God Himself will take care of our needs.
Summary
We have seen how the Shmita year teaches us to trust and obey God. The year ahead may well be a challenging year, and it is therefore increasingly important that we learn the lessons of 5782 - of filling our hearts and mouths not with the fear so prevalent in our world today, but with faith and trust in Almighty God.
Ps Enoch Lavender is based at Living Way Christian Network in Melbourne Australia and specializes in teaching about the Hebrew background of the Christian faith. Find his latest teachings online at at www.pastorenoch.com.au