China's Rapid Nuclear Build-Up Can No Longer Be Ignored 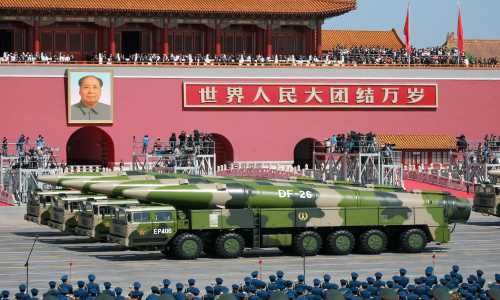 By Judith Bergman/Gatestone Institute September 22, 2021
Share this article:
China is significantly increasing its nuclear weapons capabilities. Several recent reports show that China is constructing 120 missile silos for intercontinental ballistic missiles (ICBMs) near Yumen in Gansu, up to 110 silos near Hami in the eastern part of the Xinjian region and up to 40 silos in Ordos in Inner Mongolia.
ICBMs are defined as missiles with a minimum range of 5,500 kilometers, and primarily designed for nuclear weapons delivery.
"The silo construction at Yumen and Hami constitutes the most significant expansion of the Chinese nuclear arsenal ever," according to Matt Korda and Hans Kristensen, in a report on the Hami field for the Federation of American Scientists. "All told... discoveries indicate that China might be constructing nearly 300 new missile silos," they wrote in September.
"The number of apparent missile silos under construction is similar to the total number of nuclear warheads in the current Chinese stockpile; it exceeds the number of missile silos operated by Russia; it is approaching the number of silos operated by the United States; and it constitutes the largest silo construction since the United States and Russia established their ICBM forces during the Cold War."

In May, China's Global Times, a Chinese state-owned newspaper, quoted Chinese military experts urging the government to increase the number of nuclear weapons. Song Zhongping, a Chinese military expert and TV commentator, told the Global Times:
"Considering that the US deems China its top imaginary enemy, China needs to increase the quantity and quality of nuclear weapons, especially submarine-launched ballistic missiles, to effectively safeguard its national security, sovereignty and development interests,"
Also according to Global Times, "Some military experts said China should increase the number of its most advanced intercontinental ballistic missiles (ICBM), the DF-41...." Road-mobile, it has an operational range of up to 15,000 km -- making it able to reach the US -- and reportedly can be armed with up to 10 nuclear warheads.
Also important for China, Song Zhongping told Global Times, is strengthening sea-based strategic nuclear deterrence. He added that its most advanced submarine-launched ballistic missile (SLBM) could effectively counter the US threat.
Needless to say, what the PRC regards as a "threat", as in the word "imaginary" above, can be highly subjective.
China's newest SLBM, the JL-3, reportedly has a range of more than 10,000 kilometers, meaning that it could reach different parts of the US mainland, depending on the location of the launching submarine. This missile, an upgrade of the JL-2, is not yet operational, but has been tested three times.
China is currently working on the next-generation submarine -- the 096 Class -- expected to carry up to 24 JL-3 missiles. China presented its latest nuclear-powered submarine, the Type 094A, at the PLA Navy's 72-year anniversary in May.

According to a recent report by the Center for Strategic and International Studies:
"If launched from waters near China, the JL-2 would have sufficient range to strike nuclear states in the region, such as Russia and India, but would be unable to reach the continental United States. It could, however, threaten Guam, Hawaii, and Alaska."
US Secretary of State Antony Blinken expressed his concern over China's apparent nuclear buildup at the recently concluded ASEAN Regional Forum. State Department spokesman Ned Price said after the meeting:
"The secretary... noted deep concern with the rapid growth of the PRC's [People's Republic of China] nuclear arsenal which highlights how Beijing has sharply deviated from its decades-old nuclear strategy based on minimum deterrence."
Admiral Charles Richard, Commander of United States Strategic Command, warned in August:
"China's explosive growth and modernization of its nuclear and conventional forces can only be what I describe as breathtaking. Frankly, that word, breathtaking, may not be enough... There's been a lot of speculation out there as to why they are doing all of this. I just want to say right now, it really doesn't matter why... What matters is they are building the capability to execute any plausible nuclear employment strategy -- the last brick in the wall of a military capable of coercion."
Although Chinese officials have not addressed the claims, Global Times, known for channeling Beijing's line, has been publishing a number of articles in which it addresses the issue. In one article, published in late July, Global Times concluded:
"Americans should know as clearly as the Chinese do about what level of nuclear power China really needs to build. It would be a nuclear force strong enough to make the US -- from the military to the government -- fear... The dynamic equilibrium will be achieved when the radical elites in the US completely lose the courage to even think about using nuclear weapons against China, and when the entire US society is fully aware that China is 'untouchable' in terms of military power."
"There is no information from Beijing on whether it is strengthening its nuclear buildup in the face of a realistic threat from Washington" Global Times' editor-in-chief, Hu Xijin, wrote in a more recent piece.
"But even if we were doing that, it would have nothing to do with Southeast Asian countries, or even with Japan and Australia, because China's nuclear policy also includes another firm commitment of not using or threatening to use nuclear weapons against any non-nuclear-weapon state.

Once China substantially strengthens its nuclear forces, its only purpose will be to deter the US... we must be prepared for the possibility that a war could eventually occur in the Taiwan Straits or the South China Sea."
In May 2020, in social media posts, Hu Xijin, according to Asia Times, openly called on China's military to more than triple its nuclear bomb and warhead stockpile to 1,000.
China's nuclear buildup must be seen in the context of the Chinese Communist Party's ambition to have, in President Xi Jinping's own words, "a world class military", as well as its ambition to achieve global domination.
The Pentagon wrote in its 2020 comprehensive report on China's military power:
"Although the CCP has not defined what a 'world-class' military means within the context of the PRC's national strategy it is likely that Beijing will seek to develop a military by mid-century that is equal to--or in some cases superior to--the U.S. military, or that of any other great power that the PRC views as a threat."
As Center for American Progress noted in 2019:
"In June 2018--immediately following Trump administration withdrawals from the Iran nuclear deal and the U.N. Human Rights Council--President Xi delivered a major foreign policy speech in which he stated that China would 'lead the reform of the global governance system.'
That speech marked Beijing's first official deviation from the 'never claim leadership' principle Deng Xiaoping established in 1989 when laying out the regime's post-Tiananmen survival strategy. ... Going forward, the international community should expect China's ambitions and activities to increase substantially, particularly if the United States continues to disengage from the multilateral arena and provide maximum maneuvering room."
Such ambition makes little practical sense, unless China achieves at minimum nuclear parity with the US. While China's official nuclear policy is that of "minimum deterrence" and a "no-first-use policy", there is no reason why the international community should trust such officially communicated doctrines.
China continues to strengthen its military space capabilities, despite its public stance against the weaponization of space. China is widely known for breaking its pledges, as evidenced by, among other things, its militarization of artificial islands in the South China Sea, or its crackdown on Hong Kong in contravention of the UN-registered treaty on the territory.
According to Admiral Charles Richard, if you add up all of China's modernization efforts, "what you get is something that is inconsistent with a minimum deterrence posture."
Originally published at Gatestone Institute - reposted with permission.