Palestinian Leader Introduced At UN As 'President Of Israel' 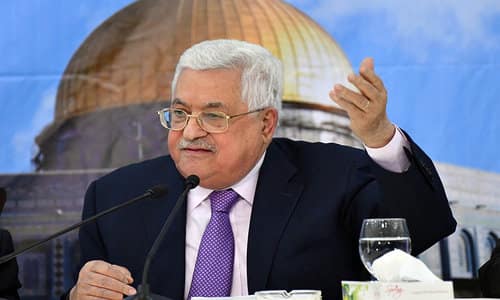 By Adam Eliyahu Berkowitz/Israel 365 News September 29, 2021
Share this article:
Palestinian Authority President Mahmoud Abbas addressed the United Nations General Assembly on Friday. Riyad Mansour, the  PA Permanent Observer to the UN, introduced Abbas but something was clearly lost in translation as the translator introduced Abbas to the assembly as "the president of Israel."
His speech was as bad as the gaffe that preceded it and equally as fictitious. Abbas, whose 1982 doctoral thesis denied that the Holocaust took place while comparing Zionism to Nazism, mislabeled "the occupation" (i.e. Israel) an "apartheid state" and accused it of "ethnic cleansing."
"If the Israeli occupation authorities continue to entrench the reality of one apartheid state as is happening today, our Palestinian people and the entire world will not tolerate such a situation," Abbas said. "Circumstances on the ground will inevitably impose equal and full political rights for all on the land of historical Palestine, within one state."

Abbas gave his speech from a remote location with the image of the gold-domed Dome of the Rock, a Muslim monument built on top of the Jewish Temple on the Temple Mount.
Abbas called for the UN to renounce recognition of Israel if it did not abandon Judea and Samaria.
"If this is not achieved, why maintain recognition of Israel based on the 1967 borders?" Abbas said.
Judea and Samaria were illegally occupied by Jordan in 1948. In 1967, Israel conquered the regions in the Six-Day War. As per international law, territories conquered in a defensive conflict may be annexed. Israel has not yet chosen to annex the land.
Abbas threatened to charge Israel in the UN's International Criminal Court (ICC), an act that violates legally binding agreements with the US.
"We will go to the International Court of Justice as the supreme international judicial body, on the issue of the legality of the occupation of the land of the Palestinian state," Abbas said.
The PA president also claimed that a double standard existed, giving as an example criticism of PA textbooks that indoctrinated children to violence against Jews while delegitimizing Israel.

"We are made to explain and justify what appears in our educational materials, even though it explains our narrative and our national identity. Meanwhile, no one demands to review Israeli curricula and media, so the world can see the true incitement by Israeli institutions," Abbas said.
Abbas also justified the PA policy of paying terrorists and their families for acts of violence carried out against Israelis.
"Why should we have to clarify and justify providing assistance to families of prisoners and martyrs, who are the victims of the occupation and its oppressive policies? We cannot abandon our people and we will continue striving to free all our prisoners," Abbas said.
This pay-for-slay policy should prohibit the US from providing financial aid to the PA as per the Taylor Force Act. President Trump cut this aid off but the Biden administration reinstated it.
Originally published at Israel 365 News - reposted with permission.