The Danger Of Invoking God's Name In The Vaccine Debate 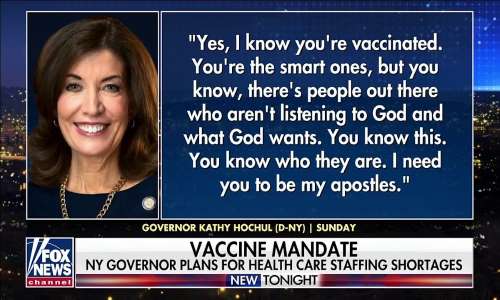 By Michael Brown/AskDrBrown.org September 29, 2021
Share this article:
More than 20 years ago, I was part of a ministry team conducting a large event in Ohio. At the outset of the meeting, the mayor came to the platform to address the substantial crowd and to welcome us to his city.
Then, in a desire to sound inclusive, he proceeded to speak about God as "he" or "she" or whoever we conceived the deity to be. You could say he misread the crowd by a country mile, and the main speaker had to act quickly to stop the booing.
The lesson, of course, is simple. This man was elected to be the mayor, not the spiritual leader of the city, and he would have done best to leave the God talk to us.
As it is, preachers and pastors make enough mistakes in the name of the Lord, often misrepresenting Him. All the more, then, should politicians be careful when claiming to make statements about Him or for Him. Best to leave the preaching to those who know the Word.

Arrogance: "God Did Not Do That"
Last April, New York governor Andrew Cuomo ruffled some feathers by giving God no credit for the temporary COVID improvements they were witnessing in his state. In his words, "God did not do that. Faith did not do that. Destiny did not do that. A lot of pain and suffering did that ... That's how it works. It's math."
Of course, since he wanted to take full credit for the decrease in COVID, pointing to the successful nature of the shutdown, he should have also taken full blame for his disastrous decision to fill the nursing homes with elderly COVID victims in order to free up hospital beds for the expected younger patients. (The move was ethically wrong and unnecessary in reality.)
To speak on behalf of God, especially without scriptural authority, let alone divine calling to do so, is a serious and ugly error.
But what got immediate attention was the arrogance of his words. Mr. Governor, please do not denigrate God's mercy. You have no idea what God did and did not do in answer to the prayers of many.
Unfortunately, after Cuomo's sudden and dramatic fall from grace, forcing his resignation, it appears that his replacement, Gov. Kathy Hochul, has not yet learned the lesson.

More Arrogance: People Who Aren't Vaccinated "Aren't Listening to God"
Speaking at Brooklyn's Christian Cultural Center this past Sunday, she said,
God did answer our prayers. He made the smartest men and women, the scientists, the doctors, the researchers -- he made them come up with a vaccine. That is from God to us and we must say, thank you, God. Thank you. And I wear my "vaccinated" necklace all the time to say I'm vaccinated. All of you, yes, I know you're vaccinated, you're the smart ones, but you know there's people out there who aren't listening to God and what God wants. You know who they are.
So, not only are the unvaccinated not "the smart ones," they "aren't listening to God and what God wants," and she, the governor, has the authority to say so. Is this not the height of hubris, even if unintended?
I have no problem with her extolling the vaccines, based on her understanding of their effectiveness.
I have no problem with her thanking God for gifting human beings with the ability to develop these vaccines so quickly. In fact, if she thinks the vaccines are highly beneficial, by all means, let her thank God. (That's something that Gov. Cuomo missed himself when taking all the credit for the effectiveness of his measures.)
And I have no problem with her saying it's smart to be vaccinated, if those are her convictions. Tens of millions of others, including many Christian leaders, would agree with her.

Way Beyond Her Place
But to say that God is actually speaking to people to get vaccinated and they're not listening to Him is to go way beyond her place as governor -- and I would underscore those words "way beyond" about 100 times for emphasis' sake. She would even be way out of line as a pastor to make such a statement. But as a governor? Really?
Who appointed her the arbiter of what God is and is not saying to His children? And what of those who, after much prayer, reflection, counsel, and serious research, concluded that the vaccine was not for them? She is also going to denigrate these people as not smart?
She continued, "I need you to be my apostles."
Yes,
I need you to go out and talk about it and say, we owe this to each other. We love each other. Jesus taught us to love one another and how do you show that love but to care about each other enough to say, please get the vaccine because I love you and I want you to live, I want our kids to be safe when they're in schools, I want to be safe when you go to a doctor's office or to a hospital and are treated by somebody, you don't want to get the virus from them.
A Serious and Ugly Error
Again, I appreciate her sentiments, wanting the people of her state to be safe. And, given her beliefs in the efficacy of the vaccine, I recognize that in her mind, to spread the pro-vaccine word is to act in love. All good and all clear.
But to speak on behalf of God, especially without scriptural authority, let alone divine calling to do so, is a serious and ugly error.
Originally published at AskDrBrown.org - reposted with permission.