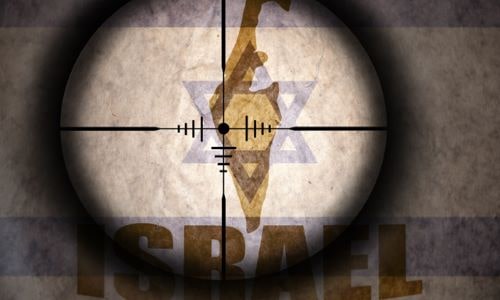 By Adam Eliyahu Berkowitz/Israel 365 News October 05, 2021
Share this article:
Billionaire financier George Soros has been funding a group whose main purpose is to promote an anti-Israel narrative in the evangelical community. And according to many experts, it is succeeding with younger Christians.
Soros Funding
The Telos Group was co-founded in 2009 by California-born lawyer of Palestinian Christian descent Gregory Khalil and evangelical Christian and former State Department employee Todd Deatherage. It claims to be "genuinely pro-Israeli, pro-Palestinian, pro-American, and pro- peace, all at the same time."
Their stated vision is "security, freedom, and dignity for every human being in the Holy Land." They define their mission as one that will strengthen the capacity of American Evangelicals "to help positively transform the Israeli-Palestinian conflict."

To further these goals, Telos organizes training seminars and national gatherings to educate evangelicals about the Israeli-Palestinian conflict and brings selected Israeli and Palestinian leaders to the US for speaking tours. The group also underwrites junkets for Church leaders to Israel.
But a look at the funding behind Telos gives a better idea of its hidden agenda. In its first three years, Telos received half of its start-up funding, a total of $713,500, from the Open Society Foundation, George Soros' multi-billion-dollar "philanthropy". From 2012 to 2019, Telos received another $1.6 million from OSF.
Evangelical Support For Israel Dropping
A recent survey registered a 42% drop since 2018 in support for Israel among evangelicals aged 18-29. Dr. Tricia Miller wrote in the Committee for Accuracy in Middle East Reporting (CAMERA):
"The increase in revenue parallels an increase in the effect that Telos is having on the Evangelical Christian perspective concerning the Israeli-Palestinian conflict, particularly that of the millennial generation," Miller wrote. "Some millennials question the validity of previous generations' backing of Israel and tend to accept the Palestinian narrative as a way to demonstrate the value they place on their perception of peace and justice."
Dexter Van Zile of CAMERA explained that the "pro-peace" messaging of Telos is a cover for an insidious agenda.
"Telos Group purports to promote a 'pro-Israel, pro-Palestinian and pro-peace' agenda, but the problem is that this slogan has become a cover for broadcasting a lot of misinformation that invariably cuts against Israel," he told JNS.org. "It's part of a propaganda or cognitive war against Israel."

Van Zile added, "The way I look at The Telos Group is that it is a group that gives Palestinian leaders access to influentials in the Evangelical community that they would not otherwise have.  These influentials then lend their credibility to the anti-Zionist cause."
NGO Monitor compiled a report on Soros-funded groups and their anti-Israel agenda. "Soros has been a frequent critic of Israeli government policy and does not consider himself a Zionist but there is no evidence that he or his family holds any special hostility or opposition to the existence of the state of Israel," the report stated. "This report will show that their support, and that of the Open Society Foundation, has nevertheless gone to organizations with such agendas."
"Receipt of significant funding from an individual or foundation that supports so many organizations that are hostile to Israel makes Telos' identity as an organization that claims to be"pro-Israeli" suspicious at best and disingenuous at worst," Miller concluded.
"Furthermore, their claim to be 'pro-peace' is negated by the fact that they accept funding from an organization that funds multiple groups that work to increase anti-Israel tensions in what is already a troubled region. As a result, their stated desire to work for peace cannot be taken seriously."
"Unfortunately, the Telos Group is either an unknowing instrument in the hands of George Soros, or is a willing accomplice to his anti-Israel agenda, intentionally infiltrating the evangelical world for the purpose of eroding support of Israel in favor of the Palestinian narrative."
Soros funds several anti-Israel groups. In 2008, Soros pledged $750,000 over three years to J Street. J Street concealed this funding for many years until The Washington Times revealed it in 2010.

J Street claims to be pro-Israel but this claim has been challenged. It should be noted that J Street refers to Israel as "the occupation." J Street advocates for establishing an Arab political entity inside Israel's borders ethnically cleansed of Jews with its capital in an exclusively Muslim Jerusalem based on the paradigm used to establish Hamas-ruled Gaza.
J Street has hosted anti-Israel speakers like political activist Mustafa Barghouti, a leader in the boycott, divestment, and sanctions (BDS) movement, and Michael Sfard, who promotes lawfare cases against Israeli officials.
In 2010, J Street co-sponsored a congressional mission to Israel with Churches for Middle East Peace (CMEP) which advocates for BDS. J Street also acts as a focal point for other allegedly Jewish groups that are anti-Israel such as Jewish Voices for Peace, Yesh Din, and Breaking the Silence.
As of February 2018, Soros had a net worth of $8 billion, having donated more than $32 billion to the Open Society Foundation. Domestically, the OSF is a strong supporter of the left-wing and the Democratic Party, especially through its support of Priorities USA Action, the Democratic Party's largest super PAC.
The OSF funds a number of anti-Israel organizations that deny the legitimacy of Israel and Jewish sovereignty, and are involved in demonization campaigns. Soros has compared Israel to Nazi Germany.
Originally published at Israel365 News - reposted with permission.