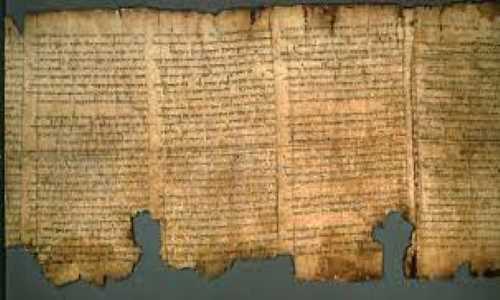 Since the Dead Sea Scrolls first came to light in the 1940s, both Jewish and Christian scholars have poured over the fragments of the ancient writings for hints about the religions’ shared heritage and history. Research is still ongoing as renewed archaeological excavations uncover new scrolls.

Over the years a consensus has emerged that the scrolls, which were written in the 2nd and 1st centuries B.C.E, are not directly related to early Christianity but provide Biblical scholars with help to understand the Bible and the Jewish world at the time of Jesus.

A world without space travel, international communications, smartphones and internet to enjoy an Everygame casino bonus (!!!) - a glimpse into the distant past.  Let's see....

The discovery of the Dead Sea Scrolls is almost universally regarded by historians and archaeologists as one of the most important archaeological finds of all time. In 1947 a Bedouin shepherd followed a goat into a cave near Wadi Qumran near the Dead Sea. He found clay jars filled with leather scrolls. He sold the jars and scrolls to antiquities dealers and they were dispersed, with some returning to Israel while others made their way to Jordan’s Department of Antiquities.

All in all there were tens of thousands of fragments belonging to over 900 scrolls. After 1967 Israel, which had captured Jerusalem from Jordan including the Rockefeller Museum that housed the Jordanian scrolls, had almost all of the scrolls in its possession. The scrolls include the oldest copies of books in the Hebrew Bible including portions of every Book of the Old Testament. Other writings include prayers, religious laws of both Judaism and the Essenes cult that lived in the area, commentaries and mystical and magical texts.

Scholars agree unanimously that the Dead Sea Scrolls have no direct relationship to Christianity.  The scrolls were written in the 2nd and 1st centuries BCE and the group that produced those scrolls, the Essenes, died out in the 1st century CE, before the teachings of Christianity had begun to spread. But the scrolls help us understand the Jewish world in which Jesus lived. Through the writings, it’s possible to gain an understanding of why his message was so alluring to the people of that era.

Some Biblical scholars have advanced the notion that early Christians incorporated the teachings of the Essenes into the religion during the early days. Like the Essenes, early Christians believed that they were living in the messianic age when God would establish a kingdom of peace.  They may have well thought that it was Jesus who was revealing the true meaning of Scripture.

The theory has also been advanced that Jesus himself lived in the Essene community, probably during part of the 18 years in which the New Testament is silent about his whereabouts.

The most outstanding of the Dead Sea Scrolls is acknowledged to be the Isaiah Scroll. The entire scroll was preserved in its entirety.  In addition, sections of all of the books of the Hebrew Bible were discovered (one that had been missing until recently, the Book of Esther, was recently found during the latest archaeological excavation that is presently underway at Qumran). 30 copies of Deuteronomy were found. Most of the text is identical to the Masoretic text that is used in Jewish communities today though some is more similar to the Samaritan Pentateuch.

A few of the scrolls include the Greek Septuagint translation but this was the original Septuagint of the 2nd century BCE, not the later Christian Septuagint that was created by Church fathers in the 3rd century CE. Scrolls with an Aramaic translation have also been found.

The Essenes were known to be immersed in the study of the End of Days (Josephus, Jewish historian of the 1st century CE).  Some of the writings contain apocrypha (Judith, Tobit) which leaders in Jerusalem forbade to be read but were of intense interest to the Essene community. Many of the apocrypha scrolls found in Qumran are identical to those recorded in Greek in the Christian Septuagint translation of the Bible.

The Jewish historian Josephus wrote about the Essenes’ interpretations of the Bible. “Being versed from their early years in . . . apophthegms of the prophets; and seldom if ever do they err in their predictions” (Josephus Jewish War II, viii, 12). Their “pesherim” – interpretations – were involved running commentaries, mostly based on the Books of the Prophets. Here are found the famous expressions “Teacher of Righteousness,” “Priest of Wickedness,” or “Man of Falsehood” to describe different personalities found in the sacred literature.

Much has been written about the Community Rule – the Sect’s Secret code. According to Philo, Roman historian of the 2nd century CE,  “They live together formed into clubs, bands of comradeship with common meals, and never cease to conduct all their affairs to serve the general weal.”  Previously, what was known about the Essenes came from historians of the day include Philo, Pliny the Elder and Josephus as well as by a few allusions in rabbinic literature. Thanks to the discovery of the scrolls, historians were treated to a more extensive picture of the pietists. The “Community Rule” covers topics including theological principals, rules of behavior at community meals and admittance of new members.

Many scholars believe that the Community Rule served as a basis for the later Christian monastic life.

Other finds of note include the Temple Scroll which deals with Temple rituals and structural details of the Temple of the era and prayers, thanksgiving psalms and hymns that demonstrate that the reclusive Qumran community devoted all of its energies to the worship of God. One of the most intriguing scrolls was the scroll of the End of Days where the writer laid out the Essene’s view of the final Day of Judgment which they believed was close at hand. This focus on the imminent arrival of the Messiah is, many believe, an important influence on early Christian thinking.