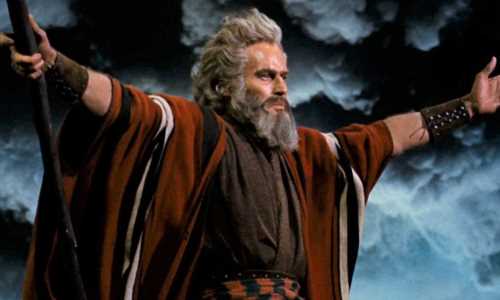 Every religion has its figurehead- a prophet or icon of some sort that represents the highest ideals of the faith. This is pretty self-evident for the most part, but I came to thinking about it in relation to the morality of religions, as in how one would judge the morality of a religion.

This is kind of a circular logic, as most systems of morality are based on religion in the first place. As you were probably told in second grade, you can't use a word in its own definition. So how can you empirically judge something so esoteric and immeasurable as faith? How do you compare the Abrahamic G-d to Zeus? It is an apples-to-oranges comparison. Like comparing your FairGo casino login to your Gmail account.

The conclusion I eventually arrived at was that the best measure of comparison was to judge these figureheads- the characters that best represent the ideals of the faith they uphold. And it was through this long, strange train of logic that got me thinking about Moses specifically, the greatest Jewish prophet- and all the traits that make him so distinct from all the rest.

When you think of a "leader", what do you imagine? Personally, my brain defaults to someone strong and upright, someone who can call people to action with his words, whose presence inspires those around him. The word leader makes me think of historical giants like Napoleon, Churchill, or King David.

By contrast, Moses doesn’t actually possess a lot of those traits. By the time he’s even called to be a leader, he’s already 80 years old (when he encounters the burning bush). He had a speech impediment and required his brother Aaron to speak for him. He is described as meek (maybe even introverted). Does that sound like an inspiring leader?

Compared to other religious icons, he lacks a certain… flair. While Jesus, Mohammed, and the Buddha are very much the protagonists of their stories, Moses is pulled along almost unwillingly into the role G-d wants him to fill.

Let's take a look at those other figures for comparison. Jesus' story makes him out to be divine right down to his conception. He worked as a carpenter, was a scholar and Rabbi, and performed miracles until the Romans nailed him to a cross. He condemned the Romans, condemned sinners, and even violently attacked moneychangers at the temple - a strange exception for an otherwise pacifist leader. The point is that Jesus is the driving character here and even agrees to his own divinity. Christian theology later expands on this through the idea of the Trinity - that Jesus was a three-for-one wombo combo of G-d, the son, and the holy spirit.

Moses, by contrast, is a divine figure that never wanted to be (a recurring sentiment in Jewish Patriarchs). The people he leads don't exactly revere him, and he's constantly shown to be frustrated and upset with them. Nevertheless, he does end up arguing on their behalf - even against G-d Himself! There's one fascinating incident after the Golden Calf's story, where G-d tells Moses that he intends to wipe out the entire Jewish people and make them anew from only Moses' family, to which Moses demands he relent and forgive them, "...if not, please blot me from your book."

And the incredible thing? G-d relents!

I don’t know of a single other story, Jewish or otherwise, where a prophet actively disagrees with G-d's will, and G-d is the one that ends up giving in. There have been other prophets who disagreed, like Jonah, who tried to run away from his duty - but G-d got him back in line. In a similar scenario, when Abraham attempts to plead on behalf of Sodom, G-d only agrees on the condition that there are at least ten good men within the city (a condition Sodom didn’t meet).

Yet for Moses, he relented. Think about what Moses was doing: G-d had offered him an opportunity to be the literal father of an entire people, blessed and sanctioned by G-d himself. Moses' personal duties would be eased by reducing the number of "...stiff-necked people…" he would have to lead. Yet Moses refused and declared that if G-d did that, then he wanted nothing to do with G-d. He was willing to be lost to history, stricken from G-d's holy book, for what he believed was right.

That right there is, I think, the fundamental difference between Moses and every other prophet. In contrast to every other major religious figure, Moses was human. He was not divinity walking. He was not the son of G-d, the avatar of G-d, or the spirit of G-d. His very presence did not make the soil holy. He did not have superpowers.

Moses got angry. He got frustrated. He was happy and sad and a righteous man, forced into a role in leadership that he never wanted, to lead a people that caused him nothing but trouble, to wage war against nations he had never visited, and for what? Not wealth, as the Egyptian rabble tried to claim. Not women, for he only ever had one wife. Not land, for he was not even allowed to enter the land his people would claim and rule.

Can you imagine what that was like? In a way, one of the most awe-inspiring stories in Jewish theology is, at the same time, a tragedy. Not for the Jewish people, but for the man, Moses. Perhaps there's a lesson in that, that sometimes (maybe even most of the time) what we want is not what G-d wants. Responsibility for an entire people might be thrust upon those who least want it, and that they must take up the calling anyway. Responsibility is a shackle or a perhaps double-edged sword. Or like carrying a bucket of water across a busy street. You'll be satisfied when you're done and proud of yourself for doing so, but you can hardly stop in the middle, right?