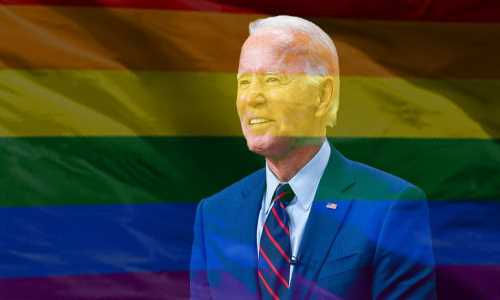 By Adam Eliyahu Berkowitz/Israel 365 News November 30, 2021
Share this article:
President Biden's multi-trillion dollar "Build Back Better" is garnering pushback from religious groups as it becomes clear that the benefits slated to help preschool children come with strings attached: in order to access the federal funding, the daycare programs must include LGBT indoctrination.
BUILD BACK BETTER LGBT
The White House's "Fact Sheet" claims that the program will provide universal preschool:
"President Biden's plan offers access to free preschool for all 3- and 4-year old children, providing parents access to high-quality programs in the setting of their choice, from schools to child care providers and community-based organizations to Head Start."
Critics of the bill say, that faith-based facilities that affirm biblical beliefs on marriage and gender would not be able to participate because they do not hold to LGBT ideology.

A report in the New York Times noted that faith-based educational institutions representing more than half of child care programs in the US may not qualify as the bill contains a "nondiscrimination provision".  According to the New York Times, the bill's provisions would "force them to choose between participating in the child care initiative and continuing to teach religious content, convene all-boys or all-girls programs, or give preferences in hiring or admissions to people of their religion."
Under the current legislation, Christian, Catholic, and Jewish child care centers are not bound by federal nondiscrimination laws. The new legislation changes this.
The bill will provide approximately $400 billion to help the state build a universal kindergarten and affordable childcare program in six years. This is intended to ensure that the majority of families (four-person households with incomes of up to $ 300,000) spend less than 7% of their income on childcare. Families who earn less than 75% of the state's median income will pay nothing.
STIFF MULTI-FAITH OPPOSITION
Alliance Defending Freedom last week released a statement criticizing the bill's language. ADF's Zach Pruitt said the bill "contains funding provisions and new grant programs that are likely to exclude many faith-based childcare providers while cutting funding to existing childcare programs currently being utilized by many faith-based providers." This, he said, "jeopardizes the freedom of parents to send their children to childcare programs that align with their religious beliefs."

The United States Conference of Catholic Bishops (USCCB) said the bill's provisions are a "departure from the approach in existing federal programs" and present "new and troubling compliance obligations."
"This will effectively exclude many faith-based providers from participation (or in some already existing state-based programs, continued participation), thereby severely limiting options for families, and suppressing a mixed delivery system," the USCCB said.
Albert Mohler,  president of Southern Baptist Theological Seminary, emphasized that the bill threatens religious people of all faiths.
"It may be true that there would be many Christians who would say, 'Well, this isn't about me. It's not about my interest. It's not about my religious organization or favorite institution,'" said Mohler. "Just understand profoundly that if they're coming with this revolution for the Orthodox Jewish preschool, they're coming for yours as well."
Originally published at Israel365 News - reposted with permission