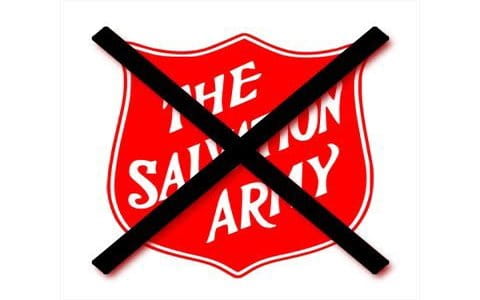 By Tony Perkins/Family Research Council December 03, 2021
Share this article:
Spot the flaw in this logic: the Bible says racism is wrong, and critical race theory (CRT) says racism is wrong; therefore, critical race theory is consistent with a biblical worldview. It should be obvious. One point of similarity cannot reconcile antithetical positions.
Unfortunately, it's no longer obvious to The Salvation Army, who tried to mix the two together in a study guide titled "Let's Talk about Racism," that has now been withdrawn "for appropriate review" last Thursday after donors complained.
The Salvation Army published an explanatory statement that, instead of apologizing, attacked its critics, insinuating "some individuals and groups have recently attempted to mislabel our organization to serve their own agendas."

The Christian charity reaffirmed its 2017 International Positional Statement on Racism, and still maintains a shorter Study Guide on Racism. These documents are "classic critical race theory," warned FRC's Owen Strachan, senior research fellow at the Center for Biblical Worldview.
The organization denies that they "believe our donors should apologize for their skin color, that The Salvation Army believes America is an inherently racist society, and that we have abandoned our Christian faith for one ideology or another," but these documents betray that there is CRT brewing in the red kettle.
Strachan explained The Salvation Army's positional statement leans "upon a Marxist understanding of racism" when it says things like "sometimes racism is overt and intentional, but often it is not." The Bible doesn't teach that racism can "be perpetuated by social structures and systems," he said. That notion was created by CRT.

The statement also confessed, "Salvationists have sometimes shared in the sins of racism and conformed to economic, organizational, and social pressures that perpetuate racism," a surprising line given the organization's strong stance against racism since its founding in the 1880s.
The study guide goes even further, "Racism can be so entrenched in institutions and culture that people can unintentionally and unwittingly perpetuate racial division." This seems to imply that individuals are held to be personally culpable for wrongs done by other members of their group. Using the vocabulary of critical race theory, the study guide explains that these groups are divided into oppressor ("dominant ethnicity") and oppressed ("oppressed people groups") along racial lines.
This indulges the same racial distinctions the Bible clearly abhors and undermines. The Salvation Army even presents a definition of racism, "prejudice plus power," implying sins of racism can only be committed by groups with power toward groups without power. By contrast, the Bible condemns partiality in all its forms, toward both the strong and the weak.

Incorporating CRT into a Biblical worldview is like mixing oil and water. The entire system "is totally anti-gospel," said Strachan. While Christianity brings a message of "good news of forgiveness in the name of Jesus Christ," CRT doesn't hold out any such hope. For the dominant group in CRT, "you're literally never going to overcome your sins of participation and structural racism," he said. The Salvation Army's attempt to "merge Christianity with wokeness" is "absolute tomfoolery," said Strachan.
The Salvation Army is marching into this battle blind. They don't seem aware that the anti-biblical ideology they are condoning will lead them to the very conclusions they deny -- for now. This self-inflicted predicament is a pitiful plight for an organization that, until recently, resolutely resisted secular pressure to conform on sexuality issues.
Will The Salvation Army wake up, or woke up? Let's hope they don't go the way of the Boy Scouts. Until then, let shoppers beware that every coin they drop in the kettle might just go towards funding a woke racial agenda.
Originally published at Family Research Council - reposted with permission.