Coming In 2022? A Federal Vaccination Database 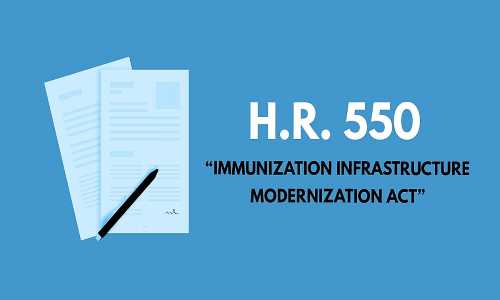 By Michael Snyder/End of the American Dream December 15, 2021
Share this article:
Have you heard of the "Immunization Infrastructure Modernization Act of 2021" yet?  If not, you need to get up to speed right away, because there is a very good chance that it is going to become law.
In the House of Representatives, this bill was only debated for 40 minutes, and then it was easily passed.  Every Democrat voted in favor of the bill, and they were joined by a staggering 80 Republicans.  Now the bill goes to the Senate, and it is expected to have similar support there.
You can find the text of the bill right here.  Like many bills that go through Congress, it has been written in a way that makes it very difficult for ordinary Americans to read and understand.
So let's start with the money allocated by this bill.

Near the very bottom, there is a line that allocates a whopping 400 million dollars for this new federal vaccination database...
To carry out this section, there is authorized to be appropriated $400,000,000, to remain available until expended.".
But to get any of that money, local jurisdictions all over the country are going to have to agree to certain "data standards".
In other words, information that is collected about vaccinations is going to be standardized all across America.
In addition, local jurisdictions will need to agree to "exchange data, directly or indirectly, with immunization information systems in other jurisdictions".
So if you move across the country, a local health official would be able to pull up vaccination records from any state that you have ever lived in.
How convenient, eh?
When Congressman Van Drew was asked why he voted against establishing a nationwide vaccination database, this is how he responded...
"This bill is another attempt by House Democrats to extend their government overreach by tracking unvaccinated individuals and recording personal health decisions made by the American people," said Congressman Van Drew. "There is no reason that $400 million in taxpayer dollars should be used to fund a program that creates a database to store citizens private medical information regarding vaccination status. This majority in Congress is doing everything in their power to seize control of Americans and exert federal control in every aspect of our daily lives."

If this bill gets passed by the Senate and signed into law by Joe Biden as expected, it is going to take some time before it is fully implemented.
But once it is fully implemented, officials all over the country will be able to determine exactly who has been vaccinated and exactly who has not been vaccinated.
Needless to say, this would make enforcing various vaccine mandates infinitely easier.
Nobody will have to come to your home to ask if you and your family have been vaccinated.  They will have everything that they need right on their computers.
There will be nowhere to run and nowhere to hide.
And you are going to have to be compliant year after year if you want to continue to enjoy the "privileges" that are given to those that are fully up to date with their injections.
For example, right now Americans are considered to be "fully vaccinated" for COVID if they have received two injections, but Dr. Fauci is already telling us that it is just a matter of time before the definition of "fully vaccinated" changes...
Dr. Anthony Fauci said during a CNN interview on Wednesday that it's only a matter of time before the definition of being fully vaccinated against COVID-19 changes.
Fauci's words came in response to a question from CNN host Kate Bolduan who asked, "Is it a matter now of when, not if, the definition of fully vaccinated changes?"
"My own personal opinion, Kate, is what you said is correct. It's going to be a matter of when, not if," Fauci answered.
Of course the definition of "fully vaccinated" is not going to stop with a third shot or a fourth shot.

The CEO of Pfizer, Dr. Albert Bourla, recently stated that he believes that we are "going to have an annual revaccination"...
I did make a projection months ago that the most likely scenario, it is that we will need after the third dose annual revaccinations against COVID for multiple reasons because of the immunity that will be waning, because of the virus that I'm sure will be maintained around the world for the years to come and also because of the need of variants that will emerge. I'm more confident right now that this will be the case than I was when I made the projection. I think we are going to have an annual revaccination. I don't know how we're going to call it but will be an annual revaccination and that should be able to keep us really safe.
In other words, you are going to have to get injected every single year if you want to keep your "fully vaccinated" status.
In his most recent blog post, Bill Gates said that he believes that the COVID vaccine and the flu vaccine will eventually be combined into a single yearly shot...
In a couple years, my hope is that the only time you will really have to think about the virus is when you get your joint COVID and flu vaccine every fall.
If Democrats are successful in getting the "Immunization Infrastructure Modernization Act of 2021" pushed through the Senate, health officials will soon have access to the vaccination status of every single American citizen.
So they will know exactly who is complying year after year.
Needless to say, this is the sort of "Big Brother" technology that I have been warning about for many years.
At one time, the privacy of our health records was something that was sacred in this country.
But now all that is being thrown out the window.
They want to be able to punish those that are not complying with their mandates, and once this system is established life in America will never be the same again.
Originally published at End Of The American Dream - reposted with permission.