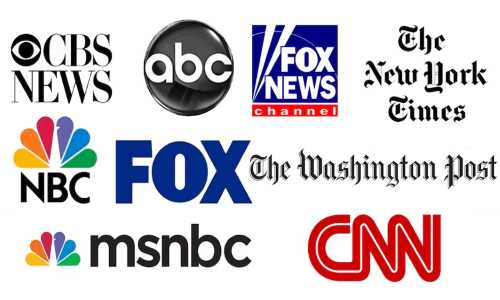 By Brandon Smith/Activist Post January 04, 2021
Share this article:
If the past year has confirmed anything it is that the mainstream media is thoroughly dishonest. Yes, most people already suspected this, but the last 12 months have provided more confirmation than the past several years combined. 2021 has made is clear that the mainstream media is a propaganda arm of political and corporate elitists, from big government to big pharma.
While there have been a few shining examples of independent and mostly unbiased journalism in the MSM, these moments are as rare as Loch Ness Monster sightings and almost as unbelievable. The public has been lied to so consistently that sometimes we ignore legitimate journalism when it pops up because it's safer to assume the media is disingenuous at all times.
I've personally noticed a wash of commercials lately paid for by major legacy media platforms like the New York Times desperately trying to convince the public that they are still relevant. The message is that they are the only "true source" of news information while they beg people to start subscribing and reading their material once again. Leftist media is crumbling, with online propaganda peddlers and click-bait producers like Buzzfeed and Vox imploding. The lack of profits is obvious and the layoffs have been aggressive.
These platforms survived for the past few years on tech media hype and venture startup capital, but the free money has run out and now they don't know what to do. Buzzfeed's scheme was to go public and sell shares, but this plan failed so completely and the company's stock plunged so hard that the event has exposed all other fledgling tech media to wider scrutiny.
In other words, no one has faith in these outlets - at least not enough to invest in them - and now the veil of their supposed "success" has been lifted. Buzzfeed used to claim they were worth $1.5 billion; reality revealed they are worth almost nothing.

Legacy media has also seen its audience numbers plummet over the past ten years, but the the last year in particular has been especially unkind to them. ALL of the major corporate news channels saw their audience ratings decline, with CNN seeing the largest drop overall.
CNN is facing an epic decline of 68% in its prime-time numbers in 2021, while MSNBC now has the smallest prime-time audience it has witnessed since 2016. Fox also dealt with audience declines but continues to remain the most watched cable news outlet so far, probably because of the continued popularity of commenters like Tucker Carlson.
Some might blame the loss of election coverage, but it's not as if there hasn't been enough news to hype in 2021. With millions of people still working from home and facing intermittent covid restrictions this year (in blue states), you would think that this would represent a captive audience for the fear machine. Even YouTube and other social media platforms are forcing MSM content into our faces daily while burying any alternatives. Yet, their numbers are still plunging and audiences are laughing.
YouTube has even removed the "Dislike" button just to protect the corporate media and the White House from the hilarious bombardment of thumbs down they receive on every video. It's unacceptable for us peasants to have the ability to voice our discontent.
So, where are people turning for their news if not the mainstream? While stats are not as well tracked for independent sources, it is obvious from viewership and subscription numbers that the alternative media is quickly becoming the dominant force in information.
My own audience numbers have jumped at least 30% in the past two years alone and this seems to be the trend across the board for conservative and libertarian media. Websites like Social Blade, which tracks YouTube channel stats, support the conclusion that the alternative media is becoming the go-to media.
Why is this happening? It's actually been a long time coming. Mainstream media numbers have been in decline for many years and their audience age brackets have been increasing dramatically. This accelerated after 2016 when the mainstream media mask came off completely and what we now know as the "Culture War" revealed itself.
The migration of audiences is undeniable in entertainment and pop culture media. Mainstream platforms funded by a steady cash flow from the corporate coffers of Disney, Time Warner, Comcast, Viacom, etc, used to reign supreme in entertainment publications. Moderately sized tech media operations clamored to remain in the good graces of these corporations in exchange for favors and special access. Now, operations with billions of dollars behind them are being thwarted by low cost do-it-yourself YouTube channels like Geeks And Gamers, The Quartering, Nerdrotic, Clownfish TV, etc.

The bloodletting has been so horrific that social media companies (with a shared agenda) have partnered with the majors to suppress these types of channels, demonetizing them or erasing them from public view with their algorithms. Alternative channels get so much attention because they offer something people want - An honest opinion and analysis instead of an opinion bought and paid for with corporate dollars.
In the political and social sphere there have been numerous success stories, including Joe Rogan's podcast, Steven Crowder, Ben Shapiro, Blaze TV's 'You Are Here', Tim Pool, the list goes on and on. In economic media, outlets like Zero Hedge continue to bring in millions of readers that most other mainstream institutions WISH they had.
To be sure, some of these information sources are still playing catch-up to those of us once considered "conspiracy theorists" a few years ago. That's okay. I'm not saying that there isn't more that could be done. What I'm saying is that there is a revolution happening in how people consume media and at least some truths are getting out there to the normies.
I have been working and publishing within the alternative media for 16 years and I don't think many who are new to the field realize how much Americans have broken free from the mainstream narrative in that time. When I got started, to even dream of the audience numbers we now have was considered naive fantasy. Today I continue to find great hope in the growth of independent journalism.
The fact of the matter is, for decades corporate institutions conned the masses into believing only THEY were qualified to act as gatekeepers and guardians of the information bottleneck. Only they were the true "journalists." They have now lost the respect of the public and their gatekeeping is over.
On that note, lets examine just a few of the reasons why trust in the mainstream has imploded. Let's look at some of the biggest lies perpetuated by the MSM in 2021...
The Jan 6th "Insurrection"
Probably one of the most fake news stories of the decade. The mainstream media has relentlessly parroted the propaganda that the conservative protest at the Capitol Building on Jan 6th was some kind of planned attempt at a national takeover and violent coup resulting in multiple deaths. The reality was much less sexy.
First, the FBI has been forced to admit there is no evidence supporting the claim that the protest was an organized coup. And when an institution that is extremely hostile to patriots admits this, you know the government has nothing.
Not a single death originally attributed to the Jan 6 protesters was actually caused by them, so that tall tale has been tossed down the memory hole. While there was violence and an unarmed protester was shot and killed by police (Ashli Babbitt), the result of the event was nothing close to an insurrection.
Protesters walked in, milled around for a little while, some people stole some souvenirs, and then everyone left. It can barely be considered a "riot." Compare this to the BLM riots across the country which resulted in multiple actual killings by people directly participating, not to mention billions of dollars in property damage. The media called these riots "peaceful protests" while condemning the Jan 6 participants as monsters.