The Palestinian School Of Terrorism 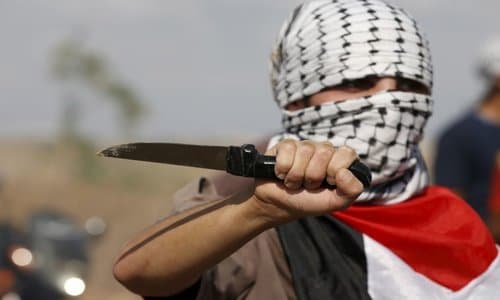 By Bassam Tawil/Gatestone Institute January 13, 2022
Share this article:
A Palestinian teacher and three school children were directly involved in the recent spate of terror attacks against Israelis in Jerusalem and the West Bank. This came as little surprise to those familiar with the ongoing hate and incitement against Israel in Palestinian schools and textbooks, as well as in the media, mosques and university campuses.
Fadi Abu Shkhaydam, a 42-year-old high school teacher from Shuafat refugee camp in Jerusalem, shot and killed Eli Kay, a 26-year-old immigrant from South Africa. The shooting attack took place in the Old City of Jerusalem. Four other people were injured before the terrorist was shot dead by police.
Abu Shkhaydam was an Islamic studies teacher at Al-Rashidiyeh Boys' School in east Jerusalem. That the school is run by (Israel's) Municipality of Jerusalem did not bother the terrorist, who was later described as a member of Hamas.
Abu Shkhaydam had no problem receiving a salary from an Israeli municipality while he continued to spew hatred against Israel in his capacity as a "preacher" and "scholar" in various mosques in Jerusalem.

Last year, Abu Shkhaydam said during a Friday prayer sermon that "Jewish and Christian masters of heresy" are part of an effort to fight against Islamic shari'a law and spread injustice. He also said that the Jews and Christians and other opponents of shari'a law are led by the devil and financed by "filthy money" from "those Bedouins" in the United Arab Emirates.
In a will he reportedly left behind, Abu Shkhaydam revealed that he had been planning the terror attack for a long time: "I write these words with great joy; I end years of hard work with a meeting with God." The terrorist said that he chose this path to please God and reach heaven. He also claimed that the terrorist attack was designed to defend the al-Aqsa Mosque.
When terrorists such as Abu Shkhaydam talk about the need to defend the mosque in Jerusalem, they are referring to peaceful and routine visits by Jews to the Temple Mount, the holiest site in Judaism.
Contrary to claims by the Palestinian Authority, Hamas and other Palestinian groups, the Jews visiting the site do not set foot in the al-Aqsa Mosque. The Jewish visitors are forced to tour the compound of the Temple Mount under police protection because of threats by Palestinians, who continue to deny Jewish history or links to Jerusalem.
Palestinian leaders and jihadis such as Abu Shkhaydam have long been depicting the Jewish tours as violent "incursions" of the al-Aqsa Mosque, which, needless to say, is a total lie and blood libel.
Abu Shkhaydam and Palestinian leaders did not miss an opportunity or any platform to spread the libel. The terrorist used every available podium in the mosques to incite violence against non-Muslims, particularly Jews and Christians.
As a teacher and mosque preacher, Abu Shkhaydam undoubtedly transmitted his poison to many Palestinians, especially the children he taught at school and those who attended his Friday sermons.
It is no wonder, then, that Palestinian teenagers grab knives or guns and set out to murder Jews in Jerusalem and the West Bank.
The young terrorists have been brainwashed by Palestinian leaders and "scholars" spewing hate against Israel and Jews on a daily basis.
The young terrorists are told by their leaders that Jews are "defiling" Islamic holy sites and that it is their duty to defend the al-Aqsa Mosque.
In addition, they are being assured that anyone who dies while carrying out a terrorist attack against Jews is a "martyr" whose place in heaven is guaranteed.

Earlier this month, a 14-year-old Palestinian school girl stabbed and wounded a Jewish woman who was on her way to drop her children at school. The incident took place in the east Jerusalem neighborhood of Sheikh Jarrah. The girl fled to her school, located only a few hundred meters away. She was arrested by the Israeli police shortly after.
Textbooks based on the curriculum of the Palestinian Authority's Ministry of Education and found in the girl's bag demonstrated the amount of wild incitement against the Israel Defense Forces and Jewish settlers, as well as the glorification of "martyrs." The textbooks are based on the curriculum of the Palestinian Authority's Ministry of Education.
For example, on page 61 of the Arabic Language Study Book there is a reading comprehension exercise that contains a story describing the burning with Molotov cocktails of an Israeli bus belonging to the Psagot settlement near Ramallah.
The purported attempt to burn Jewish passengers alive is proudly described in the book as a "barbecue party."
The Social Sciences book found in the girl's bag states that "armed resistance is a natural and legitimate right intended to oppose occupation." The book features photos from the massacres the Arabs committed against Jews in the city of Hebron in 1929.
According to the Institute for Monitoring Peace and Cultural Tolerance in School Education (IMPACT-se), Palestinian textbooks "remain openly antisemitic and continue to encourage violence, jihad (holy war) and martyrdom while peace is still not taught as preferable or even possible."
The study by IMPACT-se found that Palestinian leaders have failed to fulfill their promise to Western donors to change the textbooks. The study showed, in fact, that the newly published textbooks were even more radical than previous ones.

"There is a systematic insertion of violence, martyrdom and jihad across all grades and subjects," the study concluded.
"Extreme nationalism and Islamist ideologies are widespread throughout the curriculum, including science and math textbooks. The possibility of peace with Israel is rejected. Any historical Jewish presence in the modern-day territories of Israel and the Palestinian Authority is entirely omitted from the textbooks. Jewish history and heritage are represented as falsified; Jewish holy places are represented as Muslim areas usurped by Zionists."
An eleventh-grade Palestinian history textbook implies that Jews control the world. In other textbooks, Jews are characterized as sinful liars and fraudsters who are understood to the "enemies of Islam in all times and places." An Islamic education chapter clearly teaches that Jews are corrupt and are doomed to destruction as their "corruption of the land was and will be the cause of their annihilation."
The study also found that Jews and Israel are vilified to a greater extent than in previous curricula and that antisemitism is more prevalent throughout. Israel is mostly described as the "Zionist Occupation." The textbooks demonize Israel, and the Jews are maligned and presented as a rival of the prophet of Islam. "In short, there is no encouragement towards coexistence throughout the entire curriculum," according to the study.
This is precisely the rhetoric that encourages school children to carry out terrorist attacks against Jews. Those who turn a blind eye to this bloody incitement and antisemitism are actually giving a green light to the terrorists to continue their murderous jihad against Jews.
This is the poison that is being injected into the hearts and minds of Palestinians at the very moment that the Biden administration continues to talk about funding the Palestinian Authority and the need to revive the peace process between Israel and the Palestinians.
The Biden administration is prattling on about peace and a "two-state solution" while Palestinian leaders are doing their utmost to prepare the next generation to stick more knives into Jews.
Originally published at Gatestone Institute - reposted with permission.