Apple's 'Pregnant Man' Emoji Shows The Reconstruction Of Our Society 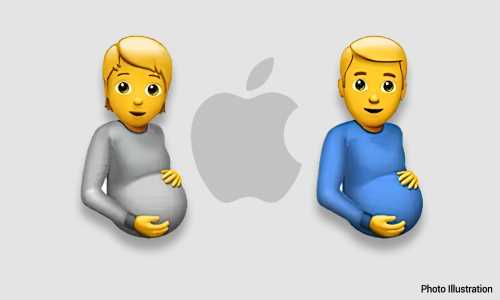 By Jonathon Van Maren/Bridgehead.ca February 03, 2022
Share this article:
Sometimes small things are big indicators. Take, for example, one of the latest additions to the Apple emoji factory: In addition to a "gender-neutral pregnant person" (enjoy figuring out that phrase), the new choices include a graphic of a "pregnant man".
At least, that's what we're informed it is. It could also just be a dude wearing a blue shirt stretched over his beer belly, which would a) make way more sense and b) would have been people's first guess like five years ago.
Emojipedia's senior emoji lexicographer, explained it was to make the emoji keyboard "more consistent and gender inclusive".

One woman's group has blasted the icon as "madness", while prominent members of the Republican Party in the United States have also ridiculed the idea.
Concerned Women for America, which describes itself as the "nation's largest public policy women's organization", tweeted at Apple's executives about the emoji.
"Follow the science, it is literally impossible for a man to be pregnant. Stop your emoji madness," it wrote.
"Instead, can we celebrate the uniqueness of men and women? God's grand design is beautiful!"
This is obviously a profoundly stupid story that could be written off as another culture war tempest-in-teapot -- or even trolling from leftist Silicon Valley types disgruntled by the idea of people losing their minds over an emoji of a fat guy. But unfortunately, this story is just another indicator of how society is transforming around us, bit by bit.

The culture around us reflects what our society sees as reality, and increasingly, that culture is being reconstructed -- transitioned, if you will -- in the image of trans activists. I've been offered all sorts of options on "select gender" menus while filling out various forms recently -- even on government forms. (I've wondered if I can select the "prefer not to say" option just to mess with them. I'd prefer not to say all sorts of things with the government.)
We now have children's shows from Blue's Clues to Spongebob Squarepants featuring trans characters (including, I kid you not, a post-op beaver cartoon character that had a double-mastectomy); cereal boxes for kids teaching them about preferred pronouns; public school lessons on choosing your gender; drag queens reading stories to toddlers; adults insisting that children are entitled to block puberty.
And on the whole "pregnant man" front, we've seen an entire media cottage industry dedicated to human interest stories plugging the nonsensical idea that males can get pregnant in order to get us used to the idea. You see, those of us who grew up in a society slightly less insane than this one won't be persuaded by much of this but the next generation is growing up increasingly seeing this as actual reality.

Why would kids see transgender ideology as normal? They've got transgender cartoons, an entire summer month dedicated to LGBT issues, they're taught this stuff in schools, the public libraries are packed with books and programming dedicated to transgenderism, and YouTube is chock full of young transgender child celebrities. Being trans is downright popular. Believing in the "binary" is what's increasingly abnormal.
So when the news breaks that there will now be an emoji option featuring a "pregnant man," don't be so sure that it is just another stupid virtue-signal from the Silicon Valley types. It is one more small but significant indicator that the culture transforming around us is accepting concepts that every previous generation would have found unimaginable -- but that our children are growing up with as the new normal.
Originally published at The Bridgehead - reposted with permission.