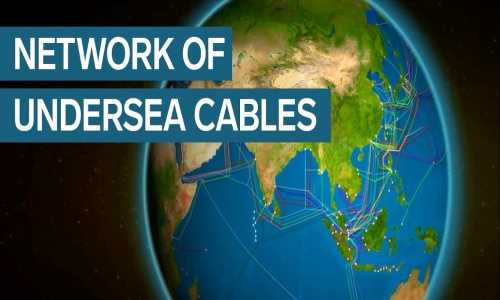 By Jeff Thompson/Organic Prepper February 25, 2022
Share this article:
Last month, as tensions with Ukraine were heating up, the Russian navy geared up for an exercise just off the Irish coast near the town of Cork.
The exercise, which would have involved the launching of cannons and artillery, was to be held in a square section of water within Irish airspace and Ireland's Exclusive Economic Zone. But what is even more interesting?
This exercise was to take place directly over the majority of the undersea cables that connect Europe and the United States via the internet.
As expected, Ireland wasn't very happy about the ships.
Sinn Fein's spokesman on defense, John Brady, said, "There are vessels entering Ireland's exclusive economic zone which we don't have the ability to monitor. We have no idea what is happening below the surface. We don't know if devices are being fitted to these data cables or if they are being interfered with."
Allegedly, after a group of Irish fishermen met with the Russian ambassador to Ireland, the training exercise was called off.

Simon Coveney is Ireland's Minister for Foreign Affairs. He had this to say about the matter:
"What's interesting is that this exercise box is 170 nautical miles off the south coast of Ireland. Incidentally, so was a suspicious Russian trawler suspected of deploying submersibles back in July 2021, 170nm away. Could that previous event have been sub-surface reconnaissance? Others may recall that the Russians flew their ASW TU-142 Bears over that location in March 2020 too. Perhaps that was a subsurface signal mapping exercise? Testing reactions, or lack thereof?"
Have there been prior happenings over these undersea cables? It would appear so.
As Coveney pointed out, it was in 2021 that a Russian vessel known as a Yantar was spotted in the same region. Allegedly, this craft was outfitted with submersibles, both remote-operated and manned, that could have tampered with the undersea cables. It was hypothesized that "listening" devices could have been attached, monitoring internet traffic through the cables.
But this wasn't the first time such activities had taken place here.
In early 2020, Russian agents of the GRU - a military intelligence agency - were sent to the same region. Their task? To map the cable locations.
According to other sources, as far back as 2017, one of these cables was actually cut by a Russian spy ship.

So, what happens if these undersea cables are cut?
Being approximately the size of a garden hose, these cables most certainly aren't as difficult to cut as would be expected for something which crosses the world's oceans. Yes, there's the difficulty of accessing them underwater, but if that can be accomplished, the rest seems rather simple.
Approximately 97% of all intercontinental information travels by means of undersea cables scattered across the globe (through 428 of them, to be exact).
As expected, that's a lot of data flowing through these undersea cables. If they didn't work tomorrow, would that be a problem?
For starters, we need to consider that damage to these cables is relatively common. Every few days, one of these cables is harmed in some manner, usually by accident or by Mother Nature. On average, there are 200 of these events/year.
As Wired.com pointed out, should these cables from Ireland to the United States be cut, the traffic could be rerouted through other cables to reach each of these respective nations. Perhaps we could just reroute all of that traffic through the Pacific Ocean? It's a good thing Russia doesn't have a Pacific coast. Oh...wait...
Also, if you take the amount of data that was previously flowing through, let's say 15 cables, and then try to push it through three, could you expect to have the same internet speeds? Perhaps this isn't a fair analogy, but what happens when you have too many people attached to your home wifi?
Obviously, nobody needs to access undersea cables in order to cause problems with somebody's internet connection. Cyberattacks seem to work just fine. But, if you wanted to cause chaos with somebody's internet, and you had the means to reach their undersea cables, that would also prove to be an effective means, would it not?
In war, a soldier can use a shotgun or a carbine, but the end result is the same, is it not? Perhaps there are reasons (which I'm not aware of) one wouldn't use a cyberattack but would instead resort to manually attacking the cabling?

What happens if the internet goes down?
The point of all this is to bring up questions of preparedness. If the internet goes down because of some kind of tinkering with these cables, what are you likely to see? Communications problems, for starters. You wouldn't be able to withdraw your money from the ATM (if you're Canadian, you might be getting used to this). Banking may be impossible.
Your ability to pay for anything with a debit or credit card would likely be hampered. What would happen to the electric meter in your house if you had a smart meter? Would electricity still flow? Is the modern power supply dependent on the internet? We can get inklings of what this would look like here and here.
There are a lot of questions here, many of which are perhaps unknown. So, do what you can now to prepare. Make sure you have plenty of food and water. Have a communications plan with your loved ones so that you can stay in contact with them after a disaster. Be able to protect yourself and your family. Ireland can't seem to do that and ends up with foreign ships in its backyard as a result.
This is just another example of where a general level of preparedness can help you to cover a host of potential problems - many of which you would have never even realized were possibilities.
Originally published at Organic Prepper - reposted with permission.