The Cornerstone Of Islamic Replacement Theology 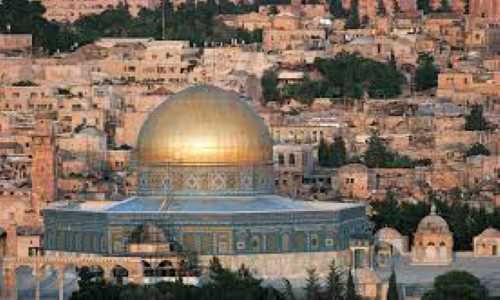 By Jonathan Feldstein/JNS.org May 05, 2022
Share this article:
When Palestinians amass rocks in Islam's third holiest site, the Al-Aqsa mosque, and use them as weapons to attack Israelis, they provide us with an apt metaphor. This is because, in the end, the conflict between Israel and the Palestinians, in particular, and Islam, in general, comes down to a rock.
When one thinks about Jerusalem, one of the most prominent images that comes to mind is the huge gold-domed building located at the center of the Temple Mount--the Dome of the Rock. In architectural terms, it's a striking structure, but it does not represent what Jerusalem is or should be. It's part of a landscape that misrepresents history.
The Dome of the Rock is built around a massive rock that's too big for anyone to transport it there as a prop--certainly not in the seventh century C.E. when the structure was built. It's easy to see this in pictures, but I know it firsthand, as I have actually been inside the Dome.

It's not something I'd do today, since as an Orthodox Jew, I understand the sanctity of the site as the exact place where the Temples stood. But in the 1980s, it was no problem for Jewish tourists--and presumably others--to visit the entire Temple Mount, take off our shoes and enter the Dome of the Rock.
Why does it matter that I have actually been inside the structure? Because at some point in the early 1980s, Jews, Christians and other non-Muslims were banned from the site. Once, non-Muslims were free to access the most holy site in Judaism without people shouting at them and threatening violence; nor did they require a military escort. Once, it could be accessed by Jews without the leader of the Palestinian Authority claiming that they defiled the Temple Mount with their "filthy feet."
According to biblical tradition, based on Genesis 22, the rock around which the Dome is built is where Abraham was told by God to bring "your only son, whom you love, Isaac" and "sacrifice him there as an offering on a mountain I will show you." Jews and Christians understand this as Abraham's supreme act of faith.

But that's also where Islam diverts from biblical tradition. According to Islam, Abraham was told to bring Ishmael as a sacrifice. If the rock's true significance and sanctity can be disregarded, and a new tradition spun off that goes against biblical narrative and historical fact, anything is possible. Sadly, this new tradition became the cornerstone of a form of replacement theology that undermines both Judaism and Christianity.
Today, it's commonplace to hear Palestinians and other Muslims deny any Jewish--and therefore Christian--history to the Temple Mount, Jerusalem and the Land of Israel in general. Why not? If Abraham didn't bring Isaac there, the rest of the Bible cannot be real, so any new narrative preached loud enough and long enough can replace reality.
It can even be used to deny Jews and Christians their right to be anywhere on the Mount, though this flies in the face of the biblical allusion to the Temple, which makes the site sacred, to begin with, as a house of prayer for all nations.
Not only do the Palestinians and other Muslims make a historical U-turn from Genesis 22, but they also willfully disregard their own history. In 1925, the Supreme Muslim Council that controlled the Muslim religious sites on the Mount published a guide to the site. This was 23 years before Israel regained sovereignty, so the attempt to erase Jewish history in the Land of Israel had not yet captured the Muslim imagination.

The guide states that "the site is one of the oldest in the world. Its sanctity dates from the earliest (perhaps from prehistoric) times. Its identity with the site of Solomon's Temple is beyond dispute" (emphasis added). Not only did Muslims affirm a biblical history they have now erased, but they published this guide specifically for visitors--that is, non-Muslims--to the Temple Mount.
Moreover, it's noteworthy that the guide was published under the authority of the then-Mufti of Jerusalem, Haj Amin al-Husseini, a notorious anti-Semite whose cries to defend Al-Aqsa sparked the 1929 Arab riots in which dozens of Jews were slaughtered. Later, al-Husseini partnered with Hitler in the attempt to exterminate all Jews, not just those in the Land of Israel.
None of this is to say that Muslims should be denied access to and the ability to pray at their holy sites. But it is a slap in the face to any rational reading of history to assume that Jews and Christians have no connection to the Temple Mount and Jerusalem in general. Our mere presence there is not a threat to anything.
Originally published at JNS.org - reposted with permission.