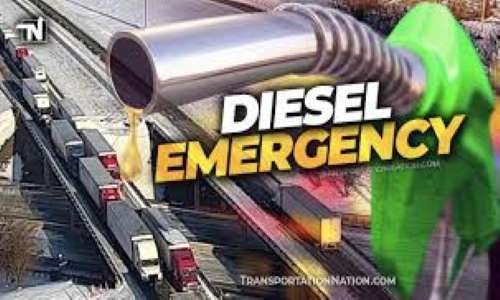 By Tyler Durden/Activist Post May 6, 2022
Share this article:
We noted earlier this week, D (for Diesel)-Day quickly approaches, though it might already be here as U.S. East Coast distillate inventories plunge to a record low, according to new government data.
Weekly petroleum data from Energy Information Administration’s (EIA) Crude Oil Inventories show East Coast distillate inventories are at their lowest ever, dropping to just 22.4 million barrels.

Total U.S. distillate inventories have sunk to levels not seen since the last financial crisis.
One of the reasons for the drop is East Coast refinery capacity has plunged over the last decade, “leaving the region vulnerable to squeezes,” according to Bloomberg’s Javier Blas.
In the past 15 years, the number of refineries on the U.S. East coast has halved to just seven. The closures have reduced the region’s oil processing capacity to just 818,000 barrels per day, down from 1.64 million barrels per day in 2009.
Total U.S. refinery utilization capacity has plunged from 96% in February to 86% at the end of April. Also, the U.S. has halted energy imports from Russia.
There’s also the issue that Gulf Coast refiners are prioritizing exports to Europe rather than increasing domestic supply, sending the price of diesel to a record high.

Diesel is used in trucks, tractors, freight trains, and power generation. Soaring prices will only exacerbate inflationary pressures.
Blas said: “The diesel shortfall is nearing crisis levels.”
Reality is starting to sink in about the worst inflation in four decades. Truckers have told the Dirty Jobs jobs guy Mike Rowe that it now costs $1,000 to fill up their fuel tanks.
Rowe said truckers aren’t buying the Biden administration’s narrative that Russia is responsible for soaring fuel prices.
With the U.S.’ busy travel season less than a month away and diesel inventories on the East Coast at record lows with refinery capacity in the region struggling, this could only suggest a fuel crisis could be nearing.
Originally published at Activist Post - reposted with permission.