PA Condemns Terror With One Hand, Rewards It With The Other 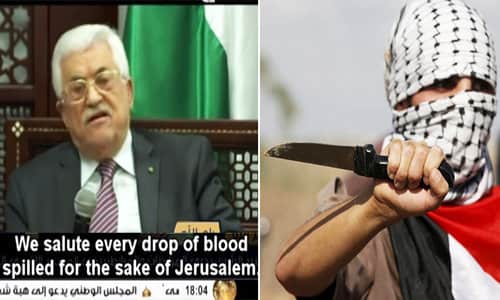 By Maurice Hirsch/JNS.org May 10, 2022
Share this article:
The two Palestinian terrorists who murdered Israelis Oren Ben-Yiftah, Yonatan Habakuk and Boaz Gol in Elad on May 5 were arrested on Sunday. This means that the Palestinian Authority will now adopt the murderers as employees and start paying them a monthly salary.
Assuming they live to be 80 years old (they are currently aged 19 and 20), over their lifetimes the P.A. will pay them no less than 6,530,400 shekels ($1,919,909), simply as a reward for murdering Jews and being arrested by Israel.
The terrorists' P.A. salaries will start at 1,400 shekels ($450)/month and will increase with time spent in prison to 12,000 shekels ($3,859)/month.
While the P.A. continues to incentivize and reward terrorists, P.A. chairman Mahmoud Abbas issued another of his mealy-mouthed condemnations "of the killing of Israeli civilians" following Thursday's murders.

The mild language of Abbas's "condemnation," which was almost identical to his condemnation of the terror attack in Bnei Brak on March 29 and of the terror attack in Tel Aviv on April 7, also reflects just how meaningless these condemnations are to both Abbas and the Palestinians.
On each of the three occasions, Abbas was incapable of simply condemning the attacks, but had to include the "warning" about the "settlers" ostensibly using the attack as an excuse to attack Palestinians, thereby making his condemnation not about Israeli civilians being murdered, but about alleged attacks of Israelis against Palestinians.
While the P.A., controlled by Abbas, continues to implement its policy of paying substantial financial rewards to terrorists, Abbas's condemnations should be seen for what they are: Empty words that mean nothing, uttered only to satisfy the demands of the international community.
Were Abbas's words sincere, he would announce to all that the Palestinian murderers will not be receiving any salaries or other benefits from the P.A.
Originally published at JNS.org - reposted with permission.