Christian Students Could Face Suspension For Use Of Wrong Pronouns 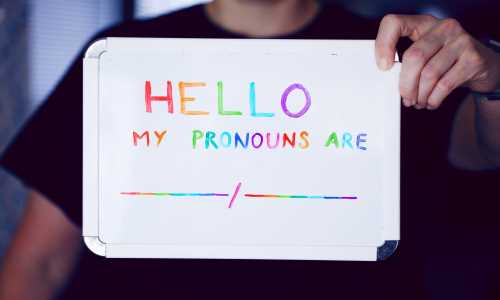 By Joshua Arnold/FRC May 17, 2022
Share this article:
Living as a Christian could get a student suspended from public school in Fairfax County, Virginia. Last week, the school board conducted an annual review of its Regulation 2601, proposing edits to a 70-page-long document on "Students' Rights and Responsibilities (SR&R), and parents noticed something shocking.
According to a short provision buried deep in the document, students could face suspension for up to five days, and possibly further punishment, for referring to a fellow student according to their biological, God-given sex.
"Using slurs based upon the actual or perceived gender identity (which includes, but is not limited to, malicious deadnaming or malicious misgendering)," reads the offending provision, which appears on Page 21, under the "SBAR Code" "RB9h," three pages into an extensive table aligning all possible offenses and punishments. The corresponding "Level 4" violation (nowhere defined) merits the punishment "circled R" ("(r)"), defined on Page 19, "allows for a suspension up to 5 days [if frequency and intensity are present]. Also allows for a referral to the Division Superintendent..." (text in brackets is a proposed addition). Is it just me, or is the bureaucratic jargon intentionally designed to confuse and discourage parents?
Glossing over their granting SOGI protections parity with innate categories, this particular provision has three glaring problems. The first is the use of the words "deadnaming" and "misgendering." These words carry no meaning to a normal, sane person who hasn't imbibed the transgender Kool-Aid. They describe using someone's given name and biological pronouns, respectively, when that person identifies with a name and pronouns of the opposite sex. They're mostly used as shorthand smears to apply sinister connotations to innocent behavior.
Secondly, the provision describes using someone's accurate name or pronouns as "slurs," in a list with prohibitions of "slurs" based on someone's race, religion, or disability. This is totally backwards. Not long ago, it was insulting to call a man "effeminate," or to call a woman "mannish." Now, we're told, it insults certain people to not call them the opposite sex of what they truly are. "He looks like a boy in a dress" should only be an insult if it is not true.
Thirdly, Fairfax County wrongly assumes malicious intent in using the "wrong" name or pronoun. They presume that transgender affirmation is the only moral option. They rule out the possibility that someone could have good motives for behaving otherwise, such as a commitment to absolute truth, concern over someone's eternal soul, or seeking their present happiness (as distinct from accommodating their present feelings).
In other words, they assume Christians are acting maliciously. After all, every American so far who has gotten in trouble for using the wrong pronouns has been a Christian deeply committed to the Bible's teaching. In fact, the terms of this provision target Christians so precisely it seems as if it were intentionally designed with them in mind.

But not to worry, the students' new overlords, Fairfax County teachers, are merciful--or at least patient. Based on their guidelines, they likely won't suspend a student for a first offense. But they will correct them and expect it not to happen again. "Any student who commits multiple offenses... may... face more stringent disciplinary action as a result," they warn. They aren't out to get your child at first, so long as they get them in the end.
If they can't persuade a student to reject biblical truth about human sexuality, that student had better beware. They could face graver disciplinary action, like suspension. If a suspension doesn't work, they can refer the student to the Division Superintendent, who "will consider all possible sanctions in the same hearing (to include short-term suspension, long-term suspension, reassignment, and/or expulsion)." And even afterwards, the student "may be subject to ongoing consequences, even after the student returns," including "probationary conditions" and "restitution."
If Fairfax County Public Schools aren't promoting moral training in a secular religion, I don't know what is. The irony is, the Supreme Court warned against this very type of pressure in banning prayer from school functions. "There are heightened concerns with protecting freedom of conscience from subtle coercive pressure in the elementary and secondary public schools," said the majority in Lee v. Weisman (1992). "What to most believers may seem nothing more than a reasonable request that the nonbeliever respect their religious practices, in a school context may appear to the nonbeliever or dissenter to be an attempt to employ the machinery of the State to enforce a religious orthodoxy."
To transgender ideologues, pronoun affirmation is simply a "reasonable request," but to a Christian (a "dissenter" from their new orthodoxy), this behavior in a school setting amounts to enforcing their religious orthodoxy. And because the controversy is over names and pronouns, students' free speech is at stake, as well as freedom of religion.

Christian students in Fairfax County Public Schools will face an uphill battle against this increasingly intolerant culture--and what begins in a wealthy D.C. suburb will be quickly exported to other school districts as well.
In fact a breaking case out of Kiel, Wisconsin, has the school district filing a Title IX complaint against three eighth graders. Their crime was their failure to use grammatically incorrect plural pronouns 'they/them' to refer to a single student. The school district has now decided to make an example of them.
It wants to be able to compel students to use language they don't want to use, even if it defies science and is an offense against the English language. Otherwise, it's "sexual harassment."
This deranged view of "tolerance" and "inclusivity" calls for all dissent to be forcibly shut down, even if it comes from 13-year-olds. Books that don't adhere to transgender dogma must be removed. Media outlets that publish opinion pieces about the differences between men and women must be shamed into altering them. Sexual assaults in schools must be covered up if the perpetrator is "gender-fluid." States that try to prevent irreversible chemical and physical alterations to children who suffer from gender dysphoria must be targeted by the Justice Department.
And, yes, eighth graders must be investigated for sexual harassment for saying "she" instead of "they."
Unrelenting adherence to transgender ideology is now a central tenet of the Democratic Party. That view has also taken over establishment media, popular culture, corporations such as Amazon and Disney, and public schools, as we are seeing in Kiel.
If a school district is willing to bring down its power on a few eighth graders, there is no limit to how far this destructive ideology will go unless it is vigorously opposed at every turn.
Christian students will have to wrestle with how can they best honor all the authorities in their life when their parents say one thing, but their teachers say the opposite? (Home schoolers don't face that question because their parents are their teachers.)
Parents should help prepare their children to wrestle with tough questions, face the world's pressure to conform, and have a solid foundation on which to stand. Parents bear the primary responsibility for educating their children. They should consider how best to protect their children from this gender insanity. Should they enroll them in a Christian school? Should they educate them at home? Should they run for school board? There are many good options, but "doing nothing" is not one of them.
Originally published at Family Research Center - reposted with permission.