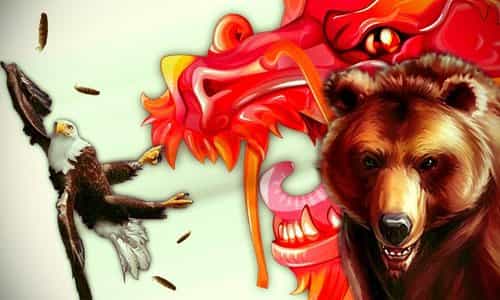 By Judith Bergman/Gatestone Institute June 08, 2022
Share this article:
Russia's war on Ukraine has brought renewed attention to Russia's nuclear arsenal and the risk of nuclear war, especially after Russian President Vladimir Putin placed his country's nuclear forces on high alert shortly after invading Ukraine on February 24.
Close to half of Americans are very concerned that Russia would directly target the U.S. with nuclear weapons, and an additional 3 in 10 are somewhat concerned about that, according to a recent poll from the Associated Press-NORC Center for Public Affairs Research.
Russia has the world's largest arsenal of nuclear weapons -- 6,255 warheads, compared to the United States' 5550 warheads -- according to the Stockholm International Peace Research Institute (SIPRI) 2021 yearbook. Russia has also been modernizing its huge nuclear arsenal for at least two decades, a process likely to conclude this decade.
Russia has not only been modernizing its nuclear triad; it has also been developing new types of nuclear systems. These include the Sarmat, the world's largest and heaviest intercontinental ballistic missile (ICBM), which can deliver up to ten nuclear warheads in the United States or Europe, and the Burevestnik, a nuclear-powered cruise missile designed to have "unlimited range" and dubbed "the flying Chernobyl," so called because of its nuclear reactor.

The new nuclear systems also include the Poseidon nuclear-powered autonomous (unmanned) underwater vehicle, and the Kinzhal, a hypersonic air-launched ballistic missile that can carry both conventional and nuclear warheads and is designed to be launched from MiG-31 fighter jets. Russia said that it fired the Kinzhal in two attacks on Ukraine in March.
The Poseidon has a range of up to 10,000 kilometers, can be deployed on submarines, and be armed with either nuclear or conventional payloads. One report states:
"Russia could release the drone from its submarine off the U.S. coast and detonate it in a way that would 'generate a radioactive tsunami' that could destroy cities and other infrastructure along the U.S. coast."
Russian television recently featured Dmitry Kiselyov, described as Russian President Vladimir Putin's "mouthpiece", saying that Britain could be plunged "to the depths of the sea using Russia's unmanned underwater vehicle Poseidon. Such a barrage alone carries extreme doses of radiation."
An April 21 report by the Congressional Research Service states:
"In December 2020, Russia's President Vladimir Putin reported that about 86% of Russia's strategic nuclear force was made up of modern weapons, a number he expected to rise to 88% in 2021... Russia is modernizing its ICBM force, replacing the last missiles remaining from the Soviet era with new single warhead and multiple warhead missiles. According to U.S. estimates, Russia is likely to complete this modernization around 2022."
As part of its nuclear arsenal, Russia has nearly 2,000 tactical nuclear weapons, also known as non-strategic nuclear weapons. Tactical nuclear weapons are designed to be used on a battlefield, as opposed to strategic nuclear weapons, which are designed to be used against enemy cities, factories, and other larger-area targets to damage the enemy's ability to wage war.
By comparison, the US only has a few hundred tactical nuclear weapons. America's new Nuclear-Armed Sea-Launched Cruise Missile (SLCM-N) would be another such tactical nuclear weapon -- more about that below -- but the Biden administration has decided to cancel it.
"Russia is adding new military capabilities to its existing stockpile of nonstrategic nuclear weapons, including those employable by ships, aircraft, and ground forces," Lt. Gen. Robert P. Ashley of the Defense Intelligence Agency (DIA) noted in 2019.

"These nuclear warheads include theater- and tactical-range systems that Russia relies on to deter and defeat NATO or China in a conflict. Russia's stockpile of non-strategic nuclear weapons [is] already large and diverse and is being modernized with an eye towards greater accuracy, longer ranges, and lower yields to suit their potential warfighting role.
We assess Russia to have dozens of these systems already deployed or in development. They include, but are not limited to: short- and close-range ballistic missiles, ground-launched cruise missiles, including the 9M729 missile, which the U.S. Government determined violates the Intermediate-Range Nuclear Forces or INF Treaty, as well as anti-ship and antisubmarine missiles, torpedoes, and depth charges."
Russia's stockpile of tactical nuclear warheads, according to Ashley, "is likely to grow significantly over the next decade."
Russia, of course, is not the only nuclear threat to the United States. China has accelerated its nuclear buildup to the extent that Admiral Charles Richard, Commander of U.S. Strategic Command told the Senate Armed Services Committee last April:
"For the first time in our history, the nation is on a trajectory to face two nuclear-capable, strategic peer adversaries at the same time, who must be deterred differently. We can no longer assume the risk of strategic deterrence failure in conflict will always remain low."
The US, on the other hand, is in several respects still at the beginning of its nuclear modernization. According to SIPRI:
"US offensive strategic nuclear forces include heavy bomber aircraft, land-based intercontinental ballistic missiles (ICBMs) and SSBNs. These forces, together known as the triad, changed little during 2020. SIPRI estimates that a total of 3570 nuclear warheads are assigned to the triad, of which an estimated 1700 warheads are deployed on missiles and at bomber bases."
When it comes to the land-based ICBMs, a vital part of US nuclear deterrence, "As of January 2021, the USA deployed 400 Minuteman III ICBMs in 450 silos across three missile wings," according to SIPRI.
"The 50 empty silos are kept in a state of readiness and can be reloaded with stored missiles if necessary. Each Minuteman III ICBM is armed with one warhead... SIPRI estimates that there are 800 warheads assigned to the ICBM force, of which 400 are deployed on the missiles."

The Minuteman III ICBMs are badly in need of modernization -- they were built in the 1970s and were originally intended to last for just 10 years. The development of a next-generation ICBM, known as the Ground Based Strategic Deterrent (GBSD) has been decided, but the process has proven slow and the Air Force only expects the GBSD to begin replacing Minuteman III in 2029. According to General John Hyten, Vice Chairman of the Joint Chiefs of Staff, the GBSD system will not achieve initial operational capability until 2030, or full operational capability until 2035.
"There's no margin left," Air Force Global Strike Command chief General Timothy M. Ray said last June. "We're just going to run out of time"
"It's going to take us 10 to 15 years to modernize 400 [intercontinental ballistic missile] silos that already exist," Hyten said in September 2021 about the GBSD program. "China is basically building almost that many overnight."
The Minuteman III has grave structural problems stemming from the fact that "the missile itself is 51 years old," but the launch capsules and other support facilities are "58 years old," according to Col. Erik Quigley, director of the Minuteman III systems directorate. The "brine Chiller lines", which cool the ICBM launch facility, for instance, are "severely corroded at all 400-plus sites," according to Quigley.
"But guess what? We don't attack that problem when we go do programmed depot maintenance out in the field. We just wait for them to break. And when they break, a missile site goes off alert, which is a huge problem."
The missiles, when inoperable, cannot be used.
The US normally tests the Minuteman III ICBMs four times a year. But in March, the Pentagon postponed a pre-scheduled test of a Minuteman III ICBM, for fear of provoking Russia in the midst of the Ukraine war. According Pentagon Press Secretary John F. Kirby:
"In an effort to demonstrate that we have no intention of engaging in any actions that can be misunderstood or misconstrued, the secretary of defense has directed that our Minuteman III intercontinental ballistic missile test launch scheduled for this week to be postponed. We did not take this decision lightly, but instead to demonstrate that we are a responsible nuclear power."
Admiral Charles Richard, Commander of U-S. Strategic Command recommended "that we maintain our normal set of operations," emphasizing that he needs the tests to "maintain confidence and reliability" in the Minuteman III, which faces growing reliability concerns as it ages and breaks down. Russia, however, could also interpret the postponement decision as weakness in the face of repeated Russian threats.
In the 2018 Nuclear Posture Review, the Trump administration decided that a new Nuclear-Armed Sea-Launched Cruise Missile (known as the SLCM-N), a tactical nuclear weapon, needed to be added to the US nuclear arsenal to provide the US with "a needed non-strategic regional presence" that would address "the increasing need for flexible and low-yield options."
The missile was expected to begin development in 2022 and achieve operational capability in the late 2020s. The Biden administration, however, removed it from the FY2023 budget, while several generals have disagreed with that decision, arguing that it is needed against Russia and China.
"The current situation in Ukraine and China's nuclear trajectory convinces me a deterrence and assurance gap exists," Admiral Charles Richard wrote in a letter to lawmakers in April.
"To address this gap, a low-yield, non-ballistic capability to deter and respond without visible generation is necessary to provide a persistent, survivable, regional capability to deter adversaries, assure allies, provide flexible options, as well as complement existing capabilities."
Removing the SLCM-N from the nuclear arsenal also signals weakness. The Wall Street Journal wrote in an April editorial:
"The Trump Administration proposed the SLCM-N in 2018. Message to Mr. Putin: If you drop a nuke on NATO soil, the alliance has the will and ability to respond in kind. This reduces the risk Mr. Putin will use a nuke.... The Trump Administration said the U.S. might reconsider the SLCM-N if 'Russia returns to compliance with its arms control obligations, reduces its non-strategic nuclear arsenal, and corrects its other destabilizing behaviors.' How's that working out? Now Mr. Biden is surrendering this leverage--probably to placate progressives who are opposed to nuclear weapons as an article of faith."
Originally published at Gatestone Institute - reposted with permission.