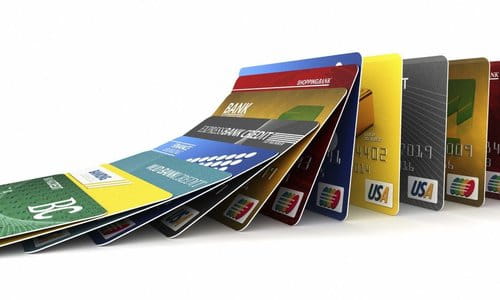 By Tyler Durden/Activist Post June 08, 2022
Share this article:
While it is traditionally viewed as a B-grade economic indicator, the April consumer credit report from the Federal Reserve was another shocker especially after last month's stunning surge in credit card debt that saw the biggest increase in revolving credit on record, which is why we said that today's G.19 print straight from the Fed would be just as important as Friday's CPI print and sure enough it was, while again confirming what we have been saying for month: any excess savings accumulated by the US middle class are long gone, and in their place Americans have unleashed a credit-card-fueled spending spree.
Here are the shocking numbers: in April one month after the jarring March print again came in more than double the $25 billion expected to $52.435 billion, in April consumer credit again exploded to a ridiculous $38.1 billion, again blowing away expectations of a $35 billion increase. And while non-revolving credit (student and car loans) rose by a relatively pedestrian 21.1 billion (which was still the 6th highest on record)...

... the stunner for the third month in a row was revolving, or credit card debt, which remained shockingly high, rising by the second highest on record at $17.8 billion, and down from only the highest print on record, March's downward revised $25.6 billion (from $31.4 billion)... ... and sending total revolving consumer credit back to new all-time highs at just over $1.1 trillion, erasing all the post-covid credit card deleveraging just in time for those credit card APRs to start moving much higher, first slowly and then very fast.

As an aside, and while not at all surprising, both auto and student loans hit a new all-time high at the end of the first quarter. While this unprecedented rush to buy everything on credit at a time when there were no notable Hallmark holidays should not come as much of a surprise, after all we have repeatedly shown that for the middle class any "excess savings" are now gone, long gone with the personal savings rate plunging to the lowest since just before Lehman... ... the fact is that most economists - such as those at Goldman Sachs - had previously anticipated that continued spending of savings by consumers is what will keep the US economy levitating in 2022.
Unfortunately, as the consumer credit numbers of the past three months demonstrate all too clearly, any savings that US middle class households may have stored away courtesy of stimmies, are long gone.
The implications are profound: any model that projected that US spending will be fueled by "savings" can now be trashed.
And since this is most of them, the consequences are dire as they confirm - once again - that the Fed is tapering, QTing and hiking right into a consumer-driven recession which was not visible until new precisely because of all the credit-card-fueled spending, which according to Deutsche Bank will begin in late 2023 and which according to Morgan Stanley can start in as little as 3 months. Today's data suggests that Morgan Stanley is right.
Originally published at Activist Post - reposted with permission.