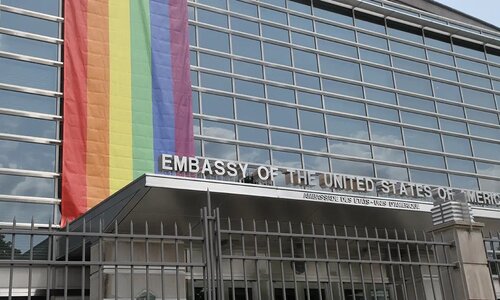 By Joshua Arnold/Washington Stand June 10, 2022
Share this article:
When does a tweet carry real-world consequences? When it has potential to spark an international incident. But that didn't stop official U.S. embassy accounts tweeting about LGBT Pride Month in countries where such behavior is not accepted. In fact, U.S. embassies in at least 98 countries acknowledged or celebrated Pride Month in some way.
Among the insulted nations was Kuwait, the tiny Gulf oil state that America fought a war to defend in 1990. The Kuwaiti Foreign Ministry summoned America's top diplomat to the nation, Charge d'Affaires James Holtsnider, over social media posts "in support of homosexuality" and delivered to him a memorandum "confirming Kuwait's rejection of what was published and stressing the need for the embassy to respect the laws and regulations in force in Kuwait."
The memo complained that such tweets violate the 1961 Vienna Convention on Diplomatic Relations, which states that diplomats have a duty "to respect the laws and regulations of the receiving State. They also have a duty not to interfere in the internal affairs of that State."
Not only did the U.S. Embassy in Kuwait repeatedly tweet about Pride Month, they also temporarily replaced their profile background image with a rainbow flag. And for their misbehavior, Kuwait's foreign ministry called them in for a formal talking-to.

Because all laws must enforce some system of morality, those in most Muslim-majority countries generally accord with the mores and norms of Islam, even in nations where the government is officially secular. Among other things, this means that homosexual practice is forbidden in most of the Islamic world, including Kuwait. International corporations understand this well enough to restrain their LGBT support in the Middle East. Coca-Cola, Pfizer, BP, and others all proudly tinge their logo with rainbow colors at home, but not in the Middle East.
America's support for Israel has rendered us broadly unpopular throughout the Arabic Muslim world since the reestablishment of that state. And while many governments of Muslim-majority countries are willing to partner with the United States, for non-religious reasons ranging from terrorism to economics to geopolitical rivalries, doing so requires a delicate balance to avoid overly offending their own populations.
In an era where virtually every American to visit the Middle East receives briefings on body language that might offend his guests (a surprising array of hand gestures, foot positioning, and more), a top diplomat should understand his host nation's hot buttons and avoid encroaching on them. Tweeting support for Pride Month from the official twitter account of a U.S. embassy in the Middle East is shoving America's immorality in the face of those who most despise it.
While America certainly should not signal support for the policies of some Middle Eastern countries that imprison and execute individuals who are accused of homosexual behavior, this is a far cry from blasting out Pride Month tweets.
Other embassies in Muslim-majority countries to tweet about Pride Month include those in Bahrain, Azerbaijan, Kyrgyzstan, Saudi Arabia, Turkey, United Arab Emirates, and Uzbekistan. U.S. diplomats also tweeted about Pride Month at Palestinians. Embassies in the Muslim-majority countries of Albania, Bangladesh, Lebanon, and Syria contented themselves with merely retweeting other State Department tweets.

Overhyping the LGBT agenda in countries where it isn't welcome is another unforced error of the Biden administration. Last year, President Biden reversed the policy of his predecessor, President Trump, and granted "blanket authorization" to fly the Pride flag at U.S. embassies. That June, the State Department set the tone by flying the "Progress Flag" (a rainbow flag with more colors added) for the first time.
But the Vienna Convention only grants embassies and ambassadors "the right to use the flag and emblem of the sending State." Beyond that, the convention stipulates, diplomats should respect the host nation's laws and regulations and not interfere in its internal affairs.
Yet it seems American diplomats are too cocky to care what the locals think. After all, they belong to this nation's political class that rarely considers what locals think in their own country. The irony is, these progressive elites are usually the first to complain about "cultural imperialism" or the tragic legacy of colonialism. When it's convenient to criticize missionaries or overseas military operations, they insist that rich, Western nations should stop foisting their values and beliefs on other countries, especially countries who have historically been colonized or conquered by (mostly European) powers. They need to look in the mirror.
Of course, there is a difference between advocating for LGBT rights around the world and, say, international religious freedom. The difference is that religious freedom is a right enshrined in Article 18 of the Universal Declaration of Human Rights, which most of the world's nations have assented to, while nowhere in its 30 articles are LGBT rights mentioned.
Thus, urging a country to respect religious freedom simply amounts to holding them accountable to a document they have already agreed to. But foisting an LGBT agenda that they have never acknowledged truly is cultural imperialism.
State Department officials don't only tweet about pride in Muslim countries; they broadcast America's shame in other countries as well, many of whom don't want it. For example, in a direct affront to devout Catholics, the U.S. embassy in Vatican City is flying the Pride Flag. Are we trying to offend the pope?