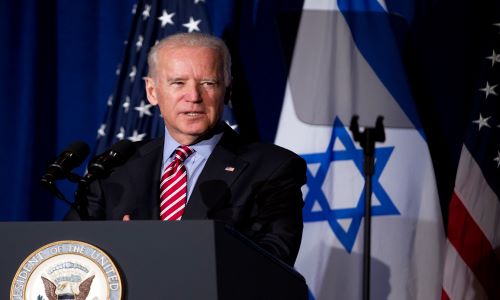 By Yoni Ben Menachem/JNS.org June 17, 2022
Share this article:
The White House has officially announced that President Joe Biden will visit Israel and the Palestinian Authority on July 13 and 14, 2022.
On Tuesday, June 14, Hussein al-Sheikh--a senior PLO official and confidant of P.A. chairman Mahmoud Abbas--met with the U.S. Assistant Secretary of State for Near Eastern Affairs Barbara Leaf, who came to Israel to lay the groundwork for the president's visit.
During the visit, Biden will be hosted by Abbas in Bethlehem, where the chairman hosted former President Donald Trump during his term in office. Biden is also expected to visit eastern Jerusalem for the first time. There, perhaps at the Makassed Hospital, he is expected to announce the renewal of U.S. financial aid to eastern Jerusalem's hospital network, amounting to tens of millions of dollars.

The Biden administration is concerned about the 87-year-old Abbas' state of health and fears that his exit from the political stage will undermine the P.A.'s hold on the West Bank, spark a bloody succession battle and boost the status of Hamas.
U.S. policymakers also fear that, even before Biden visits Israel next month, Abbas will take measures to further complicate the political situation while Israel's governing coalition is on the verge of collapse.
Last week, Abbas warned U.S. Secretary of State Antony Blinken and French President Emmanuel Macron that the Palestinian leadership is again seriously considering the implementation of the PLO Central Council's decision to suspend recognition of and security coordination with Israel in light of "the Israeli escalation in Jerusalem and the Temple Mount" that Abbas claims took place on Jerusalem Day this year.
Biden hastened to dispatch special envoy Hady Amr and then Leaf to Ramallah, where they met with Abbas.
In her parley with the P.A. chairman, Leaf emphasized the administration's commitment to the two-state solution. Abbas, for his part, again threatened to suspend relations and security coordination with Israel and demanded that the administration fulfill its promises to reopen the U.S. consulate in Jerusalem and the PLO office in Washington and delist the PLO as a terror organization.
Last week, the Biden administration announced bureaucratic changes in the U.S. embassy in Jerusalem meant to send Abbas a reassuring message that the administration is not walking back its promise to reopen the Jerusalem consulate. Unfortunately, reopening the consulate would symbolize de facto U.S. recognition of eastern Jerusalem as the capital of a future Palestinian state and effectively cancel Trump's recognition of united Jerusalem as Israel's capital.

The administration has also decided to restore the separation between the Office of Palestinian Affairs and the U.S. embassy in Jerusalem, with the former reporting directly to the State Department in Washington instead of Ambassador to Israel Thomas Nides. This diplomatic entity's official name has been changed from the "Palestinian Affairs Unit" and will continue to be headed by senior diplomat George Noll. It will take orders directly from the State Department's Bureau of Near Eastern Affairs.
This is a temporary palliative measure in response to Palestinian pressure and Abbas' threats. According to U.S. sources, the office will speed the transfer of diplomatic messages between the Biden administration and the P.A. and bolster their relationship.
The Biden administration updated Israel on its latest moves. Israel has not expressed opposition, even though the measure is clearly an interim stage toward reopening the U.S. consulate in Jerusalem, which will deal with the affairs of "Palestine."
President Biden appears to be attempting a delicate balancing act. On the one hand, he seeks to placate Abbas and move toward reopening the U.S. consulate in Jerusalem. On the other hand, he wants to avoid a diplomatic confrontation with the tottering Bennett-Lapid government. The administration does not want to give Israeli right-wing parties ammunition to accuse the Bennett government of caving to U.S. pressure by agreeing to the opening of the consulate.
The Biden administration will do everything possible to prevent the Likud Party from returning to power. Its worst nightmare is seeing Benjamin Netanyahu once again take office as Israel's prime minister.