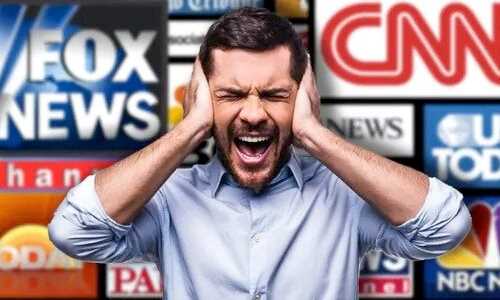 By Tyler Durden/Activist Post June 20, 2022
Share this article:
It probably does not come as much of a surprise to most people today, but it is now confirmed by the mainstream media's own surveys - they are rapidly losing their audience and their influence.
The Reuters Institute For The Study Of Journalism runs a yearly project designed to gauge public perceptions of media, specifically corporate media, and how much trust the MSM has garnered.  Spoiler Alert:  they haven't garnered any.  In fact, over the course of the past two years establishment journalists have alienated a large portion of the general public.

The latest survey finds that globally, 38% of people are avoiding most news altogether, indicating that coverage of specific subjects such as covid had become 'repetitive' and depressing.  This is an increase of almost 10% from 2017.  The more vital statistic, though, is the number of people that do not trust the media at all.
Globally, only 42% of people said they trust the media most of the time.  In the US, only 26% said they trust the media, a three point dip from 2021.  This is reinforced by the exponential decline in mainstream news ratings in the past few years.
CNN lost approximately 70% of its audience in key demographics this year, and the network recently suffered one of the smallest weekly audience ratings since 2015.  The collapse of the CNN+ paid membership program before it ever got off the ground also indicates a complete lack of public interest in the extreme leftist ideology pumped out by the network.

MSNBC's audience numbers were also down 32% this month as their prime time shows struggle to maintain a viewership of 1 million people.  Even the Jan 6th hearings, touted as a historic event for the US that would supposedly present "proof" of a planned "insurrection" of the federal government, only pulled in 20 million viewers across 12 networks; that's around 6% of the American population that bothered to watch.  Fox News is the only corporate network that appears to be holding a steady audience.
Is it any wonder that the establishment media has been working so closely with social media platforms like Facebook and YouTube to artificially push their content into top search results?  With the population thoroughly disgusted with the media's constantly biased coverage of the pandemic event, the BLM riots, the Hunter Biden Laptop issue, the Ukraine war as well as the ongoing economic crisis, the only way the MSM can get people to watch them is when they work with Big Tech to force people to watch them.
It's simple, when you constantly lie to the public eventually they will ignore you.
Originally published at Activist Post - reposted with permission.