Biden Will Have Trouble Visiting Palestinian Area Not Named After Terrorist 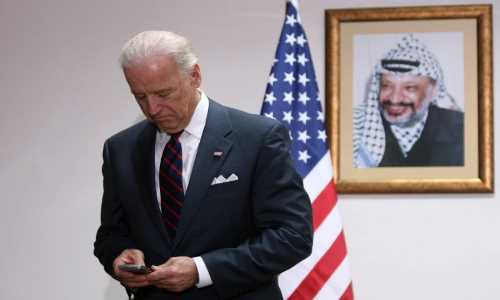 By Stephen Flatow/JNS.org June 30, 2022
Share this article:
Joe Biden's first eight years in the U.S. Senate (1973-1981) overlapped with the final years of his colleague Sen. Abraham Ribicoff of Connecticut, a fellow Democrat. Biden and Ribicoff were friends and political allies, and the newcomer benefited from the wise counsel of the elder statesman.
So I wonder what the late Sen. Ribicoff would think about now-President Joe Biden visiting a foreign region where there are numerous public sites named after the terrorist who murdered Ribicoff's niece.
Next month, Biden will become the first sitting U.S. president to visit the territories governed by the Palestinian Authority. The problem for the aides who are planning the president's itinerary is that, if they are not extremely careful, Biden could find himself at one of the many public squares, schools or other sites named in honor of Dalal Mughrabi.

On March 9, 1978, Mughrabi led a squad of Fatah terrorists who landed in several small boats on the Israeli coast. Another young woman was on the beachfront that morning--Ribicoff's niece Gail Rubin, an American Jewish nature photographer. She was taking photos of rare birds near the water. Rubin's work had been exhibited at the Jewish Museum in New York City and other major venues.
One of the terrorists, Hussain Fayadh, later described what followed to Lebanese television station Al-Manar: "Sister Dalal al-Mughrabi had a conversation with the American journalist. Before killing her, Dalal asked: 'How did you enter Palestine?' Rubin answered: 'They gave me a visa.' Dalal said: 'Did you get your visa from me or from Israel? I have the right to this land. Why didn't you come to me?' Then Dalal opened fire on her."
As Rubin lay dying on the beach, Mughrabi and her fellow terrorists walked to the nearby Coastal Road. An Israeli bus approached. They hijacked it. During the ensuing mayhem, they murdered 36 passengers, 12 of them children. Mughrabi was later killed by Israeli troops. Fayadh survived. He was sentenced to life in jail but released in a prisoner exchange. He was later hired as a senior adviser to P.A. leader Mahmoud Abbas.

In the 44 years since the Coastal Road Massacre, the P.A. has never missed an opportunity to glorify Mughrabi and hold her up as a role model for Palestinian girls. Every year on both Mughrabi's birthday and the anniversary of the slaughter, P.A. leaders and the P.A.-controlled media celebrate the life and deeds of their heroine.
Not content to honor Mughrabi twice a year, the P.A. worships her year-round by naming various sites after her. For example, in El Bireh, a town adjoining the P.A. capital of Ramallah, there is a public square named after Mughrabi.
Visiting dignitaries often pay a token visit to a school. Watch out, President Biden! In Beit Awwa near Hebron there are two schools named after Mughrabi--the Beit Awwa Elementary School for Girls and the Second Dalal Mughrabi Republic School.
It's summertime, so the president might be thinking of paying a visit to a local summer camp. Careful! The girls' camps near Tubas and Tulkarm are called the "Sisters of Dalal Summer Camps." And in the town of Yasuf, there's a "Martyr Dalal Mughrabi Camp."
If Biden's aides think it might be nice for him to see the graduating class at Al-Istiqlal University--where the U.S.-funded Palestinian Security Forces are trained--they ought to think again. Last year, a class of 20 women graduates was officially named "Class of Martyr Dalal Mughrabi."

Sporting events are a problem too. In recent years, there was a Dalal Mughrabi Soccer Team in a P.A. soccer tournament, and the Palestinian Karate Federation held a "Sisters of Dalal Mughrabi Championship for Young Women." (Thanks to Palestinian Media Watch for this information and translations.)
Even if Biden manages to avoid the various Dalal Mughrabi squares, schools and sporting events, he can't avoid the bigger problem--that the Palestinian Arabs, to whom he is giving $360 million this year, continue to promote terrorism.
When the P.A. names sites and events after Mughrabi, it is telling Arab children that mass murderers are heroes. And as long as it does that, there can never be genuine peace, because yet another generation will be raised to follow in the footsteps of Dalal Mughrabi.
In his memoir, Biden mentions that he once consulted with Ribicoff on a particularly controversial issue, on which Biden was planning to stake out a middle ground.
"That's a tough position, kid," Ribicoff told him. "Pick a side. You'll be much better off politically. Just pick a side."
The choice of sides could not be starker. On one side is the P.A. and its policy of glorifying the murderer of Gail Rubin. On the other side is the cause of justice and peace, and the memory of Sen. Ribicoff and his niece. That's the side Biden needs to pick.
Originally published at JNS.org - reposted with permission.