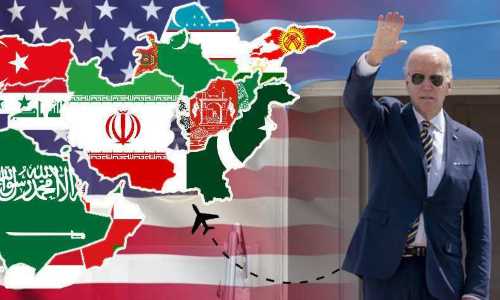 By Yoram Ettinger/JNS.org July 08, 2022
Share this article:
A major goal of U.S. President Biden's scheduled visit to the Middle East this month--in addition to increasing Saudi and Emirati oil production--is the restoration of America's stature as a reliable strategic ally and halting the Gulf states' drift toward Russia and China. However, at the same time, Biden is pursuing a JCPOA-like agreement with Iran's ayatollahs and embracing the Muslim Brotherhood.
This constitutes a contradiction, since all pro-U.S. Arab regimes view Iran's ayatollahs and the Muslim Brotherhood as lethal threats. Moreover, they are convinced that a new nuclear accord would bolster (as did the 2015 agreement) the ayatollahs' regional and global subversion, terrorism and proliferation.
They are also frustrated by the State Department's underestimation of the fanatic vision of the Muslim Brotherhood, and its taking lightly of the Brotherhood's terror network throughout the Middle East and beyond (e.g., India and Thailand).
Unlike the Biden and the State Department establishment, the pro-U.S. Arab regimes are fully aware that the ayatollahs are not amenable to peaceful coexistence with their Arab Sunni neighbors. They know the ayatollahs will never abandon their fanatic, imperialistic ambitions in exchange for a financial and diplomatic bonanza, or to comply with any agreement.

The visit may awaken Biden and Secretary of State Antony Blinken--who have prodded Saudi Arabia, the United Arab Emirates and Egypt over various issues, from human rights to involvement in the Iran-fueled civil war in Yemen--to Middle East reality.
The visit may alert them to the fact that the choice facing the United States is not between Arab countries which respect or violate human rights, but between pro-U.S. and anti-U.S. Arab countries which violate human rights.
What the visit will certainly do is reaffirm the return of the State Department (since January 2021) to the center stage of U.S. foreign policy making, as it was until January 2017, notwithstanding Foggy Bottom's systematic blunders in the Middle East.
For example, the State Department opposed the Abraham Accords, which were forged in defiance of its (Palestinian-centered) Middle East perspective. The Abraham Accords were concluded because its architects recognized the secondary role of the Palestinian issue in the Middle East.
Therefore, they focused on Arab national security and economic interests, in the face of lethal Iranian and Muslim Brotherhood threats, and the need to diversify/modernize the economy of the oil-producing countries.
The Abraham Accords--similar to Israel's peace accords with Egypt and Jordan and consistent with intra-Arab priorities--bypassed the Palestinian issue, and therefore avoided a Palestinian veto.
However, the State Department establishment has ignored the wide gap between the Arab talk and walk on the Palestinian issue. It has thus misconstrued the Palestinian issue as the crux of the Arab-Israeli conflict, a core cause of Middle East turbulence and a crown jewel of Arab policy-makers. This is why all State Department Israel-Arab peace proposals have failed, wrecked on the rocks of Middle East reality.
The attempt to expand the scope of the Israel-Arab peace process, on the one hand, and the State Department's preoccupation with the Palestinian issue, on the other hand, constitute a thundering contradiction.

When assessing the validity of State Department proposals submitted during Biden's visit, Israel should study additional examples of critical State Department blunders. For example, its early embrace of Ayatollah Khomeini, Saddam Hussein, Yasser Arafat and Bashar Assad, as well as Foggy Bottom's reference to the eruption of the 2010-2011 turbulence on the Arab street (which is still raging) as "Youth and Facebook Revolution" and "the Arab Spring."
In addition, in 1948, the State Department ferociously opposed the establishment of the Jewish state, which it expected to be pro-Soviet and too weak to withstand an Arab military offensive, undermining U.S. national security interests and constituting a burden for the United States.
In 1981 and 2007 the State Department brutally attempted to stop, and then condemned, Israel's bombing of Iraq's and Syria's nuclear reactors, which later spared the United States, the Middle East and the world at large much devastation.
Biden may attempt to impose upon Israel a quid-pro-quo--consistent with the State Department's "Palestine Firsters"--requiring Israeli concessions to the Palestinians in return for enhanced strategic cooperation with Saudi Arabia and other Arab countries (which regard Palestinians as a role model of intra-Arab subversion, terrorism and ingratitude).
Biden and Blinken should be reminded that concessions to rogue entities only whet their appetite and intensify terrorism, as documented by the unprecedented waves of Palestinian terrorism following Israel's dramatic concessions in 1993 (Oslo Accord) and 2005 (disengagement from the Gaza Strip). Furthermore, Egypt (1950s), Syria (1966), Jordan (1970), Lebanon (1970s) and Kuwait (1990) made major civic and financial concessions to the Palestinians, which resulted in Palestinian terrorism against their Arab hosts, including civil wars in Jordan and Lebanon and Palestinian participation in Iraq's invasion of Kuwait.

Biden will try to convince Israel to concede the mountain ridges of Judea and Samaria and allow the establishment of a Palestinian state. Biden should be advised that based on the Palestinian track record, a Palestinian state west of the Jordan River would doom the pro-U.S. Hashemite regime east of the River.
It would be replaced by a radical, anti-U.S. regime, triggering an anti-U.S. ripple effect into the Arabian Peninsula, toppling pro-U.S. Arab regimes, transferring the supply of Persian Gulf oil to anti-U.S. entities and bolstering the geo-strategic stature of Iran's ayatollahs, Russia and China at the expense of critical US interests.
Israeli control of the mountain ridges of Judea and Samaria deters rogue entities and advances U.S. interests; the proposed Palestinian state would radicalize the region, undermining U.S. interests.
Israel will be asked to authorize a U.S. consulate in Jerusalem, acting as a US embassy to the Palestinian Authority. Such a demand would be in violation of the US 1995 Jerusalem Embassy Act, which defines Jerusalem as the undivided and exclusive capital of Israel. It would be interpreted--regionally and globally--as succumbing to Arab/Muslim pressure, thus further eroding U.S. deterrence.
When considering Biden's demands for Israeli concessions, Israeli Prime Minister Lapid should study the conduct of previous Israeli premiers. These Israeli leaders fended off U.S. presidential pressure, experiencing a short-term setback in the U.S.-Israel relationship but a long-term gain in U.S. strategic respect.
While respecting President Biden and Secretary Blinken and their demands, Israeli leaders should understand that the U.S. democracy features Congress as a co-equal, co-determining branch of government. Congress is the most authentic representative of the American people, the most powerful legislature in the world, and has the power to both propose and dispose in the areas of foreign and defense policy. Moreover, it has expressed deep reservations with regard to U.S. policy on Iran (e.g., Senate Foreign Relations Committee chairman, Sen. Robert Menendez' February 2022 floor speech).
While most U.S. presidents have pressured Israel, Congress has been a systematic supporter of enhancing the mutually beneficial U.S.-Israel strategic and commercial relationship.
Originally published at JNS.org - reposted with permission.