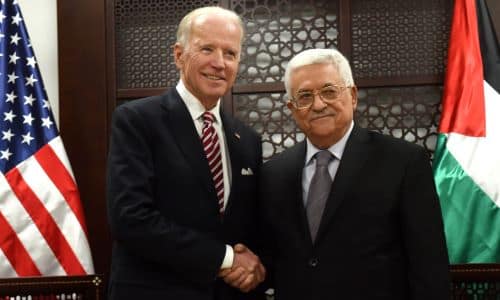 By Bassam Tawil/Gatestone Institute July 14, 2022
Share this article:
Israel is once again being asked by the US administration to make "gestures" to the Palestinian Authority. The purpose of these measures, according to the Americans, is to strengthen the Palestinian Authority (PA) and its president, Mahmoud Abbas.
The PA, of course, is not being required by the Americans or other international parties to make any "gestures" or "concessions" to rein in terrorism (here, here, and here), support for it, murder as a jobs program, or to treat its own people with increased regard for either a more prosperous future or human rights.
There is much that the Palestinian Authority can do to ease tensions and help create a suitable atmosphere for the resumption of the peace process with Israel. The PA could, for example, stop the incitement against Israel, halt payments to families of terrorists, condemn terrorism and crack down on terror groups operating under its control.
Yet there is no reason why the Palestinian leadership should do anything so long as no one is asking it to.
Instead of halting the incitement, the Palestinian Authority is continuing to encourage hostility and even violence.

As the Biden administration is talking about the need for "gestures," PA Prime Minister Mohammad Shtayyeh, just this month, falsely accused Israel of using the bodies of slain terrorists in Israeli medical laboratories. This is the type of whipping people up that prompts Palestinians to carry out more terrorist attacks.
The Biden administration might do itself a favor if it understood that previous "gestures" made by Israel did not contribute to peace and stability in the region, and did not advance any peace process between the Israel and the Palestinians.
On the contrary, Israeli "gestures" and "concessions," such as the release of terrorists from prison, the increase in the number of Palestinians permitted to work in Israel, and the removal of checkpoints have been interpreted by the Palestinians as signs of weakness, capitulation and, by the leadership, as permission to continue mistreating their people. It is this unresponsive governance by the Palestinian Authority to everything except killing Jews -- not the absence of "gestures" -- that strengthens the support for Hamas.
The Palestinians correctly spot these fig-leaf public relations "gestures" as merely political plumage for Abbas that does not require him to change how he mistreats them. So why not try Hamas?
Similarly, the Israeli withdrawal from the Gaza Strip in 2005 was also seen by the Palestinians not as a kind or generous "gesture," but as a "retreat" in the face of terrorism -- especially as it took place after a wave of suicide bombings and rocket attacks against Israel. It was hard, in fact, to find anyone in the Gaza Strip who saw Israel's withdrawal as a positive development or as a sign that Israel wanted peace and calm. Instead, it was seen as a validation of terrorism: We shoot, they run. Great! It's working! So, let's keep on doing that!
Until today, Hamas, the Palestinian Islamist group controlling the Gaza Strip, continues to portray the withdrawal as a "defeat" for Israel and "victory" for the terror groups. In addition, Hamas continues to describe the "expulsion" of Israel from the Gaza Strip as a first step towards achieving its goal of eliminating Israel and replacing it with an Iranian-backed Islamist state.

In 2008, the Israeli government thought that a series of "gestures" and "concessions" would strengthen then Palestinian Authority Prime Minister Salam Fayyad. The Israeli measures were announced on the eve of a visit to the region by then US Secretary of State Condoleezza Rice.
The Israeli measures did not help Fayyad; he was eventually forced to resign because of tensions with the veteran Palestinian leadership, including Abbas, who saw him as a threat to their authoritarian rule.
Fayyad was never popular among the Palestinians: he had never spent a day in Israeli prison and had not been involved in terrorism.
In Palestinian culture, it is more important if one graduates from an Israeli prison than from the University in Texas at Austin, where Fayyad studied before going on to work at the World Bank between 1987 and 1995. When he ran in the 2006 Palestinian parliamentary elections at the head of an independent list called Third Way, he won only two seats.
The "gestures" that Israel is now being asked to make are not going to bolster the standing of Abbas and his senior officials in the Palestinian Authority. These moves are also not going to change the PA's and Palestinians' perceptions about Israel or the US, as past experiences clearly show.
A recent public opinion poll conducted by the Palestinian Center for Policy and Survey Research found that 59% of Palestinians view armed attacks against Israelis as serving the national interest of the Palestinian people. Another 55% support a return to an armed intifada (uprising) and clashes with Israel. In addition, the poll found that a majority of Palestinians (65%) are opposed to dialogue with the Biden administration.
The "gestures" and "concessions" will, in fact, be seen by Palestinians, like Israel's retreat from the Gaza Strip, as a reward for their ongoing incitement and terrorism against Israel.
The "gestures" the Biden administration is demanding are, according to the Israeli group Regavim, illegal:
"A first-of-its kind visit by a US President to east Jerusalem without any Israeli presence of accompaniment, signaling that our capital is divided between two sovereigns, constitutes a substantive violation of US law, Israeli law and diplomatic protocol."

According to some reports, one of the "gestures" includes a visit by Biden to a Palestinian hospital in east Jerusalem. There is, of course, nothing wrong with visiting a hospital, but if you insist on going to east Jerusalem without being accompanied by Israeli officials, then you are seeking to advance what is, in reality, a frustrating improbability: that Jerusalem is not the capital of Israel.
Here is what the official Fatah Facebook page published as late as May 25, 2022: "No statute of limitations will apply to our historical right to take back all the Palestinian land from the [Jordan] River to the [Mediterranean] Sea, including the [Jordan] River and the [Mediterranean] Sea" -- thereby making an alliance with Hamas all the more tempting in order to accelerate the process.
In addition, talk about increasing the Palestinian Authority presence at the Allenby Bridge border crossing between Israel and Jordan -- to signal joint sovereignty and authority over Israel's border and the secession of its control and sovereignty over the Jordan Valley -- will only create an immensely destabilizing situation, for which the Biden administration will justly be blamed.
The Palestinian Authority has done almost nothing to disarm the terror groups operating under its control in several parts of the West Bank, especially Jenin and Nablus. If the PA is unable or unwilling to fight against the Palestinian terror groups, how can it be trusted to assume control over a border crossing between Israel and Jordan? Does the Biden administration seriously believe that Abbas's representatives at the border crossing would thwart attempts by terrorists to smuggle weapons into Israel?
The opening of a US consulate/embassy to the Palestinians would, as the Biden administration seems to want, only increase the Palestinian Authority's appetite to engage in more incitement and violence against both the Jews and their own people.
It would have been more helpful had the Biden administration demanded that the Palestinians stop the incitement and disarm all the terror groups operating in its areas. The terror groups treat Palestinians even worse than they treat Jews.
The US delegation, however, does not seem to care about the Palestinian incitement and terror, or even how the Palestinian people are misgoverned.
The Biden administration is making a big mistake by forcing Israel to make concessions to the Palestinian Authority. Rewarding it for bad behavior will only aggravate tensions between the Palestinians and their government, embolden the extremists among them and drive the Palestinian people even further into the waiting arms of Hamas.
Originally published at Gatestone Institute - reposted with permission.