With China, Biden Has Put U.S. In 'Most Dangerous Moment Since WWII' 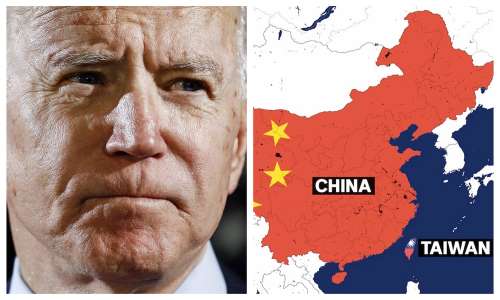 By Joshua Arnold/Washington Stand August 01, 2022
Share this article:
If top U.S. officials were trying to lose a cold war to China, they could hardly do a better job. A report from Saturday details how China's infiltration of U.S. infrastructure could potentially give them influence over our nuclear capabilities. Another report from this week detailed how China infiltrated the Federal Reserve, cultivating assets and stealing information.
Last week, Republicans on the House Oversight Committee sounded the alarm on transactions where oil sold from the U.S. Strategic Reserve was purchased by a company owned by China -- to the tune of six million barrels. Now, China is trying to dictate where senior U.S. officials can travel.
"This is the most dangerous moment in history after the Second World War," warned Gordon Chang on Monday's edition of "Washington Watch." "We've seen a China now that is more dangerous than ... at any time during the history of the People's Republic." He explained, "they see the disarray in the Biden administration, and, because of that, they think that they can boss the president around."

Chang said China's saber-rattling has taken "an ominous tone." In an effort to intimidate U.S. House Speaker Nancy Pelosi (D-Calif.) away from visiting to Taiwan, Foreign Ministry spokesman Zhao Lijian warned Monday that China would "take firm and strong measures," and "the U.S. must assume full responsibility for any serious consequence arising thereof." Perkins said, "I'm not a big fan of Nancy Pelosi, but I will say she has been pretty tough on China, especially when it comes to human rights."
One of China's threats is that "Chinese planes might accompany Pelosi's plane as it landed in Taiwan. In other words, for Chinese planes to violate Taiwan's sovereign airspace, and obviously that is unacceptable. We don't know exactly what China would do, but that is one of the things that they've actually talked about in public," said Chang.
"Eventually the law of averages will say that one of these Chinese intercepts will go dangerously wrong." FRC President Tony Perkins responded, "that gets pretty risky because when you start doing that you could have an accident. Something could happen that would trigger an international incident."
"China is just trying to be a bully," remarked Rep. Vicky Hartzler (R-Mo.). "No other country should dictate where our leaders go." More than that, she said, "we need to be supporting them militarily with the equipment they need, and not make the mistake that President Biden did as it relates to Russia and Ukraine ... waiting until it's too late to try to get them military equipment. ... We need to be standing up for them now."

American support for Taiwan is both ideological and strategic, Hartzler said. "We value freedom and democracy. We value the people of Taiwan. ... There's also a strategic reason to ... help the people of Taiwan. They produce 90% of the computer chips that we use." She explained that "there's a shortage already because of COVID," and "we can't get equipment" because "everything uses computer chips."
When asked about the trip last Wednesday, President Biden answered, "The military thinks it's not a good idea right now." Way to pass the buck, Mr. Commander-in-Chief. What do you think? "By talking about divisions within his administration, he was encouraging the Chinese to become even more belligerent," Chang remarked. "Biden has actually aggravated the crisis and made it worse than it needed to be."
And the Biden administration had already given China plenty of reasons to be aggressive. "They saw the debacle in Afghanistan. They saw the failure of the Biden administration to deter Putin in Ukraine," Chang continued. "It's not just in Taiwan. It's also in the Second Thomas Shoal in the Philippines."
China has gotten so aggressive that the State Department has had to warn China against encroaching against the Philippines. China's jets fly "through Taiwan's air defense identification zone." Their frigates sail "through Japanese territorial waters." Their military has conducted "joint exercises with ... the Russians," as well as "a dangerous buildup in Ladakh in the Himalayas."
Xi Jinping also has a domestic "incentive to do something dangerous," warned Chang. With a debt crisis, property developers defaulting, mortgage boycotts, supplier boycotts, and bank runs, "their economy is in contraction," he explained.
China's economic problems "would give the United States leverage for economic activity against China," Perkins said. Chang agreed but added that is true only "if we have a president who was willing to use American power ... and unfortunately, we don't have one at the present moment."

In fact, the current administration is currently squandering America's power. Nowhere is this more evident than in the decision to sell America's strategic stockpile of oil in pursuit of a marginal drop in gas prices. If "it was used at least for Americans," said Perkins, "I certainly understand." But "selling this to foreign countries ... it's almost treasonous," he exclaimed. Rep. Pat Fallon (R-Texas) agreed, "it's exactly the opposite of why the Strategic Petroleum Reserve was set up in the first place" -- for military purposes or a national emergency. "I wish I could tell you that this is just a bad science fiction novel, but, unfortunately, it's bad policy by this administration, and it's all too real."
China has an estimated 980 million barrels of oil in reserve with the "capacity to hold about a billion," Fallon explained. Under President Trump, the U.S. stockpiled up to 695 million barrels, but "today we're sitting at about 480 million barrels ... a 31% decrease from the high point of President Trump to today. And they just announced that they're selling another 20 million barrels," he said. "It's very chilling to see the ineptitude of this administration."
"In the meantime, the Chinese continue to strengthen their hand while they're being more aggressive internationally with other countries," said Perkins. "What's required is strong leadership." Hartzler lamented, "our allies don't trust us, and our enemies don't fear us. And that needs to change." For starters, we can stop selling of our strategic petroleum reserve to influence gas prices; that's about as fiscally responsible as spending your entire paycheck on lottery tickets.
Chang and Perkins also agreed that Pelosi should definitely go to Taiwan. "At this point, to back down would show even further weakness," Perkins said. "If we fold, and we tuck tail and run, they will do more in the future. Chang argued, "if she doesn't go, she's going to make China much more aggressive."
Originally published at The Washington Stand - reposted with permission.