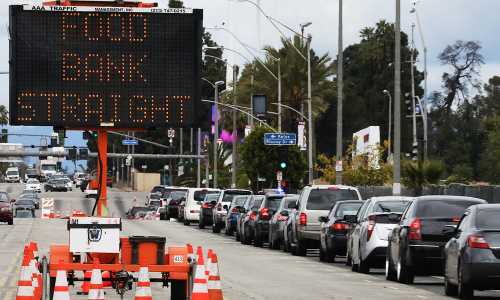 By Tyler Durden/Activist Post August 09, 2022
Share this article:
Food pantries and food banks are a key economic indicator for tracking poverty levels and financial instability in the US, and in the past few months they have been ringing alarm bells.
Stagflationary pressures have all but wiped out the savings of the average American and driven up credit-card debt to historic highs.  Only in the past month have credit spending and debt levels begun to slide, but this is more a sign that consumers are tapped out rather than a sign of a return to normalcy.
High prices are slowly but surely overwhelming lower-wage workers in particular.  The average living wage across most US states is around $16 an hour; over 30% of American workers make less than $15 an hour.

Democrats and leftists will of course claim that this is because the Federal Minimum Wage is too low and needs to be increased, but the minimum wage has become irrelevant in the post-covid economy.  Many retail and service companies now pay around $11-14 an hour, well above minimum wage, in order to retain workers. And STILL prices are too high for many of these people to keep up with expenses.
Can average workers demand more money?  Probably not.  Low-skill and no-skill workers are going to have a hard time rationalizing $16-$20 an hour for flipping burgers, brewing coffee or running cash registers.  Such a broad wage increase would also trigger even higher prices on most goods, defeating the purpose of higher pay.
The notion of a low-wage worker revolt is a bit of a fantasy, and in some ways it can be dangerous for those who believe in it.  The trillions of dollars in covid stimulus unleashed in 2020 may have boosted retail sales and employment for a couple of years, but that's coming to an end quickly.
Workers can only opt out of certain jobs for a short time (as long as their parents will let them freeload), and bargaining for more money is dependent on their ability to get employment elsewhere.  It's a sure bet that by mid-2023 many "wage revolutionaries" will be begging for their old burger jobs back.

Stagflation is not a wage issue so much as a money supply issue.  There are too many dollars chasing too few goods.  This is coupled with numerous supply chain problems caused by covid hysteria in export nations like China that are holding up a large number of cargo ships for weeks or months at a time.
When it comes to food in particular, there are weather issues, war issues and governments sabotaging food production within their own countries using nonsensical climate change restrictions (as we are seeing in places like the Netherlands).
So, if people aren't going to get higher wages, and prices are going to continue climbing, what are they going to do?  They generally turn to charities to help get through the month.
In the past month there has been a steady stream of reports from pantries across the US stating that they are now hitting record-high demand and record-low supply.  From New York to Wisconsin to Ohio to Missouri to Florida to Arkansas to California and beyond, pantries are running out.  On top of that, it's the middle of summer - the busiest time for food banks and the Salvation Army is during the winter holidays.

The majority of pantries indicate that they are most in need of cash donations and that these have started to fade out.  When it comes to necessities, most people will not or cannot reduce the frequency of their purchases.  Food, gas, housing, utilities, etc. are fixed income costs, and when these costs rise workers must cut costs elsewhere.  Charities are usually the first to see the chopping block.
The avalanche of reports suggests that this winter will be high in food demand and dismal in terms of supply, with little relief from charities.  The most advisable option would be to stock dry and canned goods with a long shelf life now while they are still available, and prepare for the cold season when demand skyrockets even higher.
Even people in financial distress can utilize pantries today and stock supplies for the months ahead if they plan carefully.  Those same pantries may not exist when winter rolls around, so now is the time to act.
Still, don't call it a recession (or depression)...
Originally published at Activist Post - reposted with permission.