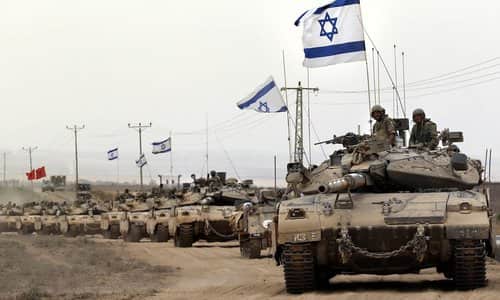 By Alex Traiman/JNS.org August 11, 2022
Share this article:
Israel's 66-hour campaign targeting the military leadership of Palestinian Islamic Jihad was a major success on multiple levels. The first was military: Israel succeeded in taking out the entire PIJ command structure, rapidly achieved its military objectives, striking over 170 strategic targets with limited collateral damage, and then quickly brokered a ceasefire.
The second and perhaps even more surprising success was that coverage of Israel's preemptive strike in the international media was muted, as were the condemnations from around the world that are typically connected to any Israeli military action.
Unparalleled military dominance
For decades, Israel has enjoyed superior intelligence, firepower and air power compared to its enemies. However, Israel's military edge over local terror factions has reached a new level, as demonstrated clearly both during the current round of hostilities and the previous one just over a year ago.
For better and for worse, Israel has become a surveillance superpower. Israel is watching and listening; even to apps and channels its enemies think are encrypted. Israeli security services can track and locate nearly any device at any time.

These game-changing surveillance capabilities plus advanced technology enable the Israel Defense Forces to generate new targets in real time using complex algorithms. During the 11-day "Operation Guardian of the Walls" in May 2021, Israel was able to automatically and continuously generate new targets in the middle of the fighting, in a manner beyond the scope and abilities of any human intelligence.
The second component of Israel's military dominance is pinpoint accuracy. If a target is in the dining room of an apartment on the fourth floor of a 10-story building, Israel can put a missile through the window of the room.
Israel is thus able to identify, locate and strike targets while dramatically minimizing collateral damage and civilian casualties. This enables Israel to inflict mortal blows to terror infrastructure and only terror infrastructure. On multiple occasions during the three-day operation, for instance, Israel delayed a strike due to children identified playing in the area, waiting to fire until civilians were clear of the area.
It was these enhanced capabilities that led the international community to pressure Israel to slam the brakes on its operation against Hamas last May, and that may have led Israel to agree to a quick ceasefire this week. It was Hamas's own firsthand knowledge of these capabilities--and the threat of losing its entire command echelon--that deterred Hamas, Gaza's largest terror faction and governing agency, from entering the latest round of hostilities.

In contrast to Israel's military prowess, Palestinian terror factions have poured billions of dollars into low-tech, inaccurate rockets, which often misfire. More civilians were killed in Gaza than in Israel this week by PIJ rockets than were killed by the Israeli military.
And the overwhelming majority of the missiles that did clear the Gaza border (and whose trajectories were calculated to end in populated areas) were shot out of the sky by Israel's Iron Dome air-defense system. According to the IDF, Iron Dome performed with approximately 96% accuracy.  (In future conflicts, Israel will be able to shoot missiles out of the sky with lasers. Successful tests of the laser version of the Iron Dome, called Light Shield, have already been conducted.)
In short, Gazans shoot rockets indiscriminately at Israeli citizens, and Israel shoots them out of the sky. Israel knows exactly who the terrorists are, where they are at any given time, and can take them out one by one or in groups, with pinpoint accuracy. It may be high time for the Gaza terror factions to realize the utter futility of their hostility.
Mainstream media and the international community want Lapid to stay prime minister
It is usually a given that an Israeli military operation will garner rapid and severe condemnation from the international community, regardless of whether it is a direct response to terror attacks or rocket fire. All the more so if Israel launches a preemptive strike, as was the case with "Operation Breaking Dawn."
Yet, for some reason, this time the condemnations did not fly thick and fast from all corners of the globe.
One explanation may be found in the mainstream media's fawning over caretaker Israeli Prime Minister Yair Lapid in the operation's aftermath.
Associated Press ran an analysis less than a day after the ceasefire took hold, titled, "Israeli PM's Gaza gamble seems to have paid off." The article noted that less than three months from an upcoming election, Lapid may have "gained political ground ahead of the polls" and "scored political points at home with the short military campaign."
The article noted that prior to the campaign, Lapid had "lacked the security credentials that Israelis often seek in their leaders," adding that "by Monday morning, Lapid appeared to have burnished his security prowess for beating back what he said was an imminent threat from the Palestinian militant group."
The article similarly praised Lapid as "the architect of the outgoing coalition government," which "ended the 12-year reign of [current opposition leader Benjamin] Netanyahu," despite the fact that the coalition unceremoniously crashed barely a year after it was formed and relied on an Arab party that is a sister organization to Hamas. And AP claimed that over the years, Lapid "became a hero for the mainstream, secular middle class."

It is highly unlikely that AP would have treated Netanyahu, or another hawkish Israeli premiere, with the same admiration after a preemptive attack on terror groups in Gaza.
Israel's predominantly left-wing media has been advancing similar talking points. Several Israeli outlets pointed to Netanyahu's begrudging attendance at a security briefing on Sunday as chair of the opposition, with his political rival Lapid now sitting-at least temporarily-in the prime minister's chair, as a political win for Lapid. For the past year, Netanyahu has refused to take his legally-mandated briefings as opposition head directly from former prime minister Naftali Bennett and then from caretaker prime minister Lapid.
The media's fawning over Lapid, instead of the typical anti-Israel condemnations, begs the cynical question of whether Lapid is being granted cover by an international press that desperately prefers the media-friendly, globalist former television anchor over the media-hostile, hawkish and nationalist Netanyahu.
Meanwhile, Israeli voters are unlikely to be swayed.  A majority of Israelis indeed view favorably the handling of the three-day operation by Lapid and Israeli Defense Minister Benny Gantz-who is also eyeing the prime minister's chair in the upcoming election. Yet a series of polls published by Israel's three largest television stations several hours after the ceasefire took hold showed that the electoral sizes of the larger pro-Netanyahu bloc and smaller anti-Netanyahu bloc remained unchanged.
All polls continue to show Netanyahu on the edge of being able to form a 61-seat coalition, similar to the results of the previous four elections, and his Likud Party polling more than 10 seat's higher than Lapid's Yesh Atid.  The current conflict, even after being handled well by Lapid, is unlikely to shift the electoral math as many media pundits hope.
Originally published at JNS.org - reposted with permission.