Why Your 'Christian' Friends Have Become LGBTQ Allies 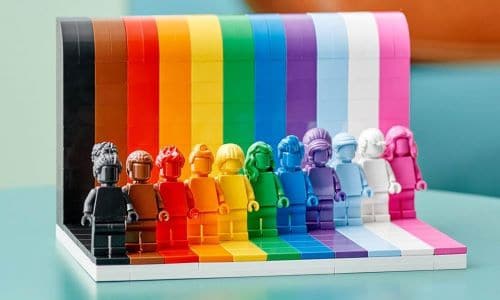 By Samuel Say/Slow To Write August 11, 2022
Share this article:
Some of your supposedly Christian friends have recently said they are members of the LGBTQ community. That's becoming increasingly common. However, an even bigger number of your supposedly Christian friends have become LGBTQ allies.
You already know that. But do you know why?
There are, of course, several reasons why many professing Christians are embracing LGBTQ ideology. Satan has devised many schemes to lead us into apostasy. With that in mind, although all people who support LGBTQ ideology do so for the same reason: sin--people can commit the same sin from different temptations.

As I've alluded to, one of the reasons why many professing Christians have become allies with LGBTQ people is because many of their friends and family have become members of the LGBTQ community.
Studies show that this is statistically the biggest reason why people become LGBTQ affirming. For instance, a 2013 study from Pew Research Center shows that 32% of Americans changed their minds on gay marriage because they "know someone who is homosexual."
When a loved one says their sexual sins are an intrinsic part of who they are, they're suggesting that if we do not love their homosexuality or transgenderism--then we do not love them. That is a powerful, manipulative argument that many parents, siblings, and friends do not have courage or integrity to resist.
Many of us love and fear our friends and family more than we love and fear God. We're more afraid of becoming enemies with our loved ones than becoming enemies with God. Therefore for every person who becomes a member of the LGBTQ community, many more of their friends and family will become LGBTQ allies.
In a sense, familiarity breeds acceptance. Our culture knows that.
In a leaked video about Florida's Parental Rights In Education bill, an executive producer at Disney said they had a "not-at-all-secret gay agenda." Since people are more likely to become LGBTQ allies when they know and love others who are members of the LGBTQ community--influential institutions in our culture like Hollywood, mainstream media, social media, and academia have created an agenda to produce favourable LGBTQ representation to make us more accepting of LGBTQ ideology.

Therefore the most popular movies, TV shows, and books today feature characters and storylines designed to normalize LGBTQ sexuality. Knowing this, my wife--Annie Sey--has created a service called Library 4 Littles to help parents protect their children from deceptive books that indoctrinate them.
Still, Hollywood is filled with LGBTQ sexuality. For instance, Disney's Lightyear featured a kiss between a lesbian couple. Marvel's latest film, "Thor: Love and Thunder" is described as "super gay" by its director. And some of the most popular shows for teenagers and young adults today like Euphoria, Sex Education, and Stranger Things have at least two major characters who are LGBTQ.
After all, if your favourite character on TV has a gay best friend, why wouldn't you accept your own friend who's LGBTQ? Hollywood knows that if we support LGBTQ sexuality in our films and TV shows, we're more likely to support LGBTQ sexuality in real life.
Related to this, another major--yet unacknowledged--reason why so many professing Christians have become LGBTQ allies is because of porn. Sexual sins create apathy and support for other sexual sins. Pornography is a sexual sin that normalizes and endorses other kinds of sexual sin like rape, incest, and LGBTQ sexuality.
Therefore many professing Christians have become LGBTQ allies because many professing Christians watch porn. We've normalized porn--we've normalized sexual sin, so we've normalized LGBTQ sexuality.
Another widely known reason why some of your supposedly Christian friends have become LGBTQ allies is because of unrelenting indoctrination in public schools. This, coupled with failure from parents and pastors to teach Biblical theology and apologetics on sexuality makes many professing Christians unprepared to resist compromise.

However, as I suggested earlier, temptation to compromise happens in many ways. Satan has many schemes to lead us into compromise on sexuality--one of them is critical race theory.
5 years ago, I said: "once we develop a worldly understanding of race, we become enticed by a worldly understanding of gender, sexuality, and ultimately, the gospel."
In my article on Why Woke Christians Support Abortion a couple of weeks ago, I said:
"The intersectional argument for equity is one of the reasons why woke "Christians" support abortion. Naturally, it's also one of the reasons why woke Christians are increasingly affirming LGBTQ ideology."
The reason why woke "Christians" support abortion and LGBTQ ideology is the same: critical race theory and intersectionality.
The founder of intersectionality, Kimberlé Crenshaw, said: [intersectionality is] basically a lens, a prism, for seeing the way in which various forms of inequality often operate together and exacerbate each other. We tend to talk about race inequality as separate from inequality based on gender, class, sexuality or immigrant status.
Therefore, in his book How To Be An Antiracist, Ibram Kendi says "Homophobia cannot be separated from racism. They've intersected for ages...we cannot be antiracist if we are homophobic or transphobic."
This is why many of your supposedly Christian friends have become LGBTQ allies. Critical race theory compelled them to become "allies" with black people, then through intersectionality--they're now compelled to become LGBTQ allies.
As the Bible says, "A little leaven leavens the whole lump." (Galatians 5:7-9Open in Logos Bible Software (if available))
If you reject a Biblical view of race, don't be surprised if you eventually reject a Biblical view of gender and sexuality.
As John Owen said, "Sin aims always at the utmost; every time it rises up to tempt or entice, might it have its own course, it would go out to the utmost sin in that kind...it is like the grave that is never satisfied."
A little sin always leads to a bigger sin, and a little compromise always creates temptation for more compromise. Therefore we should overcome little temptations so we can build up strength to overcome bigger temptations.
Originally published at Slow To Write - reposted with permission.