Is The United Nations The Final Beast System Of The End Times? 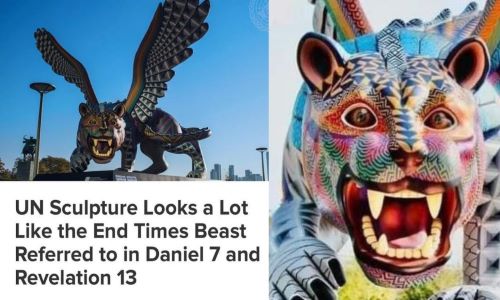 By PNW Staff August 11, 2022
Share this article:
At the "Summit for the Future" in 2023, the UN, together with civil society and the private sector, are expected to agree on shared principles for an "open, free and secure digital future for all".
This includes promoting a "trustworthy Internet" with accountability criteria for discrimination and misleading content as well as regulating Artificial Intelligence to be consistent with "our shared global values". However, what this means in practice is that the "values" must correlate with the beliefs held sacred by the UN and WEF (The Ministry of Truth).
Secretary-General António Guterres writes in Our Common Agenda that one of the risks of the Fourth Industrial Revolution is "the use of digital surveillance and manipulation to influence behavior and control populations."
This very legitimate concern, however, is more about the fact that the UN does not want this technology to fall into the hands of forces that they themselves or their partners do not control. This is because the whole idea behind the "Global Digital Compact" is to be able to control the world's population and align its values ​​to be in line with the UN's and WEF's interpretations of the 17 Global Goals of Agenda 2030.

One such example is "The seventh commitment in Our Common Agenda is about improving digital collaboration through the creation of a "Global Digital Compact". This means that all people should be connected to the Internet, that liability criteria for discrimination and misleading content should be developed, that artificial intelligence should be regulated, and the establishment of the "Digital Commons" as a global public good. However, the whole thing is more comprehensive than that. By extension, this constitutes the construction of a digital World Brain intended to regulate and control all human life to keep it within the planetary boundaries.
The commitment is one of the more central ones and is about creating a consensus on the need for total digitization. This builds on the recommendations made in the report The Age of Digital Interdependence (2019) by the UN High Level Panel on Digital Cooperation led by Melinda Gates (Bill & Melinda Gates Foundation) and Jack Ma from the Ali Baba Group and in collaboration with actors such as the World Economic Forum and their Center for the Fourth Industrial Revolution.
Another example is the initiative Coalition for Digital Environmental Sustainability (CODES), which was formed after the launching of the UN Roadmap for Digital Cooperation in March 2021 with the aim of promoting "digital sustainability". The coalition currently gathers around 1,000 stakeholders from over 100 countries.
CODES works to implement collective system changes and remove any obstacles standing in the way of the total digitization that they believe is needed to implement the sustainability goals.
During the environmental conference in June 2022, CODES presented its action plan which aims to inform about the priorities included in the Global Digital Compact.

In order to deal with the negative environmental and social effects from energy use, greenhouse gases, material use, consumption, digital divides, violations, and "incorrect information", it is proposed, among other things, that platforms for reporting and comparing companies' greenhouse gas emissions and that digital product passports be introduced with the aim of being able to follow a product entire life cycle.
The latter is part of the circular economy and will eventually also be used on us humans. It is a new ecosystem in the making where everything is to be connected in order to measure degree of sustainability. A World Brain that analyzes and keeps track of everything and everyone.
Among the examples of how problems with incorrect information should be handled, Facebook's "Climate Science Center" is highlighted. The climate issue is the cornerstone of the agenda. As of the Paris Agreement 2015, the science is considered to be settled and no more debate or nuance in this field is to be tolerated.
The spread of misinformation about planetary sustainability topics such as climate change, biodiversity loss or pollution can undermine collective action and trust in institutions as well as magnify polarization and mistrust between divided groups.
Instead, "incorrect information" on the web must be corrected and visitors instead provided with the United Nations' "verified" climate information.
On the website, they write that two-thirds of carbon dioxide emissions are linked to human consumption and that they will "creatively leverage technology and partnerships to increase green awareness and green actions among 1 billion green digital champions worldwide by the year 2025". The citizens, who according to The Green Digital Finance Alliance want immediate change, should be encouraged to make climate-smart choices through a rating system.
Every purchase is registered and assessed according to the climate benefit. In this way, the necessary behavioral changes will be achieved.
It should come as no surprise then that the founders behind the Green Digital Finance Alliance also helped develop the Chinese social credit system. Apparently the Chinese system might just be a precursor to what is planned on a global scale.

Bible prophecy scholars have long examined the connection between the United Nations quest for a global world order and the system of "The Beast" described in the book of Revelation.  The current plans by the UN would certainly seem to provide a pathway to many of the systems that will be in place as described in the End Times.
In what might have been an ominous sign of things to come, in December of 2021 a statue was placed outside the United Nations building in New York City that caused a lot of buzz in the Christian community for it's imagery. The image looks like a kind of lion or leopard with wings and rainbow-toned coloring. The art piece is said to be "a guardian of international peace and security."
Several passages of Scripture have been associated with the "guardian of peace and security" statue at the UN building. Daniel 7:2-4 relates a vision of beasts, representing governments; one is depicted with a body like a lion and wings like an eagle. Revelation 13:2 symbolically refers to a beast being given power and authority by Satan. First Thessalonians 5:3 speaks of the last days when people will say, "There is peace and security," only to experience unexpected disaster.
This statue resembling end-times images, erected at the headquarters of the world governing body, named with a phrase directly tied to the End Times... makes you wonder if it is more than coincidence?
The UN Global Digital Compact is clearly a stealth plan to track everyone and everything with 'climate scores' in the name of the greater good but it is much more than that.
Many climate activists would like to see the Green Revolution become the Green Religion where we put climate worship above all else. If you don't bow down and worship this climate religion and it's regulations you will be excluded from daily life or possibly face fines/prison.  Many of the issues that issues that surfaced during covid over personal freedoms and rights could be magnified to an even greater degree under a climate emergency mentality.
Covid came very close to pushing the entire earth to look for a universal health response (rules & regulations) where all nations would reach an agreement through the United Nations. Most nations agreed that there had to be a coordinated response - a single nation left out or going rogue could disrupt the entire response.  Look for that same type of mentality to take over with climate issues...and it makes sense.  Why should be we shut down our economy while China produces even more pollution at our expense economically?
Only 'UN approved" content on issues relating to climate (and more?) will be allowed on the Internet.  Once a system using AI is in place that monitors all online content - it's ministry of truth can blacklist anything it disagrees with - all in the name of misinformation.  We have already seen this with shadow banning of Conservatives on Facebook and Twitter.
Climate deniers are already banned from most social media platforms.  All consumable products will be part of the 'digital commons' and tracked for sustainability. The UN will control what you buy and sell according to their rules (Revelation 13)
The UN has even used Agenda 21 and the Millennium Development Goals to divide the earth into 10 regional groupings or spheres of influence to help administer climate goals.  Revelation warns that in the last days the beast system will have control over 10 kings/nations/powers...
The UN has one person, a Secretary-General who administers the powers of the UN. While this position has been fairly powerless in times past - that could change due to a global crisis.  Could a future world leader, the head of the UN, be the Antichrist?
In a nutshell, the plan is for all human life to be regulated by the UN - just look at their own documents.  Is the UN the final beast system of the end times?  Only time will tell.