Conservative Christians In The Crosshairs - Biden's IRS Agents Coming For You 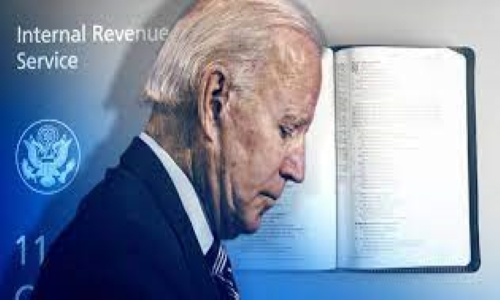 By Douglas Blair/Daily Signal August 16, 2022
Share this article:
Tens of thousands of new IRS agents will target middle-class, conservative Christians for new rounds of audits just like they did during the Obama years thanks to President Joe Biden's new Inflation Reduction Act.
Jenny Beth Martin, a founder of Tea Party Patriots, warns that the skyrocketing number of Internal Revenue Service agents under the Biden administration could herald the return of a politicized tax agency targeting conservatives.
"I said back then, if they're not held accountable, other bureaucrats will think that they are able to abuse the law in an even more egregious manner and get away with it," Martin, a Florida resident, said in a phone interview with The Daily Signal.
"What concerns me is what we're hearing right now with these 87,000 new IRS agents, they have such enormous power, they can garnish wages, they can levy bank accounts, they can put liens on your property," Martin said.

In 2013, conservatives accused the Internal Revenue Service of unfairly targeting their organizations as they sought IRS approval for tax-exempt status.
The agency admitted it had selected specific groups applying for tax-exempt status--either 501(c)(3) or 501(c)(4)--for additional and intense scrutiny based only on their names and political affiliations.
Most of the time, the IRS targeted conservative groups, looking for words in their names such as "freedom," "liberty," and "patriots."
Conservative organizations were forced to endure years of waiting to receive information from the IRS regarding their applications.
"I believe that we applied in 2010 and then that we did not hear back until about 2012," Martin, 52, recalled. "So it took almost two years, which is odd because normally you get an approval very quickly."
And when conservative groups did hear back, she said, they were subjected to onerous questioning that went far beyond what was necessary to determine whether they qualified as tax-exempt organizations.
"They wanted to know what was said at our events. They wanted to have access to the back end of our website so they could read stuff on our website," Martin said of the IRS questions. "So they were asking for things that were outside of what they should have been asking for."
One high profile rejection case showed the IRS initially denied a Christian organization their tax-exempt status, because they mentioned biblical teachings on their application.

One IRS agent anonymously, illegally leaked the donor list for the National Organization for Marriage to the media. NOM supported a successful series of votes to protect marriage in state constitutions nationwide. The IRS claimed an unnamed employee forgot to remove the donors' names when forwarding a copy of NOM's 990 form to a reporter, who then forwarded the list to the Human Rights Campaign, an LGBT pressure group that led the effort against protecting marriage.
Eventually, the allegations that the IRS was targeting conservatives got so bad that Congress stepped in.
The House Oversight and Government Reform Committee called then-IRS Commissioner Douglas H. Shulman to testify about the allegations in 2012. Shulman testified that the IRS was not targeting conservative groups, then resigned later that year.
Also in Republican lawmakers' crosshairs: Lois Lerner, then director of the IRS' Exempt Organizations Unit, which approved or rejected applications for tax-exempt status.
Lerner appeared before the House committee May 22, 2013, and testified briefly that she had "not broken any laws" or "violated any IRS rules or regulations." She then cited her Fifth Amendment right not to incriminate herself and refused to testify further.
As the committee pursued the matter, lawmakers called Martin to testify about how her group had been targeted by the IRS.
The IRS chose that time to approve the tax-exempt status for Tea Party Patriots.
"It still took another over a year before they finally approved our status," Martin said. "But they called our attorneys, telling us it was approved the day before I was testifying before Congress about it."
All in all, it took her organization two and half years to get that IRS final approval.
Although her group eventually got its tax exemption and Lerner resigned from the IRS, Martin told The Daily Signal that the government employees responsible for dragging their feet in scrutinizing conservative groups never received any punishment.
"The people at the IRS who broke laws were never held accountable," she said.
To Martin, her prediction that the government would act to censor conservatives could be coming true, and it would have chilling consequences specifically for free speech.

"The aftermath initially for us when they were targeting tea party groups is that it had a chilling effect on speech and a chilling effect on the First Amendment," Martin told The Daily Signal.  "We were assembling together to exercise our grievances to our government peacefully."
She continued:
If the targeting goes on the way that we're seeing it right now, I think that people are going to be afraid to express who they support. I think they're going to be much more careful about what they say, especially what they say in public or even online.
Martin concluded the interview with a call to "repair the foundations" of faith in government by holding government agencies accountable.
"If we do not find a way to fill the cracks and to repair the foundation, which in this case will be restoring faith in the government agencies and departments and seeing a chance of true accountability happening, then the problems will get worse," she said. "So we have to find a way to hold the people accountable who are abusing their power."
The past will serve as prologue warned former Arkansas governor and two-time Republican presidential candidate Mike Huckabee. "One of the groups that needs to be careful is all these nonprofits who are pro-life, Christian, and conservative. It will be Lois Lerner all over again, targeting these people, because they don't have rooms filled with lawyers and accountants" to defend themselves, he said.
Rep. Jim Jordan (R-Ohio) agreed, noting that dozens of pro-life pregnancy resource centers have already "been assaulted with graffiti, all kinds of things. They're now going to be the ones who are going to be visited by these tax bureaucrats at the IRS."
Originally published at the Daily Signal - reposted with permission.