Will Catastrophic Crop Losses In 2022 Lead To Unprecedented Shortages In 2023? 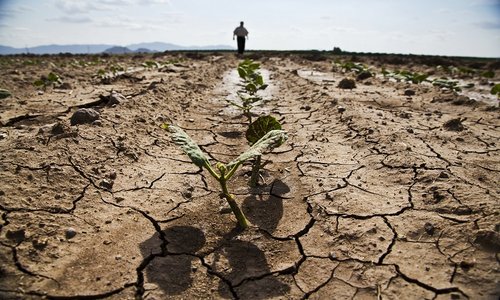 By Michael Snyder/Economic Collapse Blog August 17, 2022
Share this article:
Crops are failing all over the globe this summer, but most people don't even know that this is happening because the big television news channels aren't talking much about it.  Instead, they remain intensely focused on politics day after day.
Without a doubt, the political realm is important, but there should also be plenty of time to discuss a raging global crisis which is going to deeply affect all of us.  The food that is not being grown this year is not going to be on our plates next year, but the vast majority of the population doesn't understand this.  They see plenty of food in the stores now and they just assume that everything is going to be okay.
Unfortunately, everything is not going to be okay.  Over in the UK, a major British news source is warning of "widespread crop failures across England"...
Experts have warned of widespread crop failures across England, as charities and farmers criticized water companies for dithering over hosepipe bans despite drought being declared across much of the country.
So what sort of losses are we talking about?

Well, it is now being projected that losses could reach up to 50 percent for a wide variety of crops...
Half of the potato crop is expected to fail as it cannot be irrigated, and even crops that are usually drought-tolerant, such as maize, have been failing.
The group was told "irrigation options are diminishing with reservoirs being emptied fast", and losses of 10-50% are expected for crops including carrots, onions, sugar beet, apples and hops. Milk production is also down nationally because of a lack of food for cows, and wildfires are putting large areas of farmland at risk.
The British are assuming that they will just get enough food to feed their population from someone else.
But that is what everyone else is assuming too.
As global food supplies get tighter and tighter, the wealthy countries will buy up food at elevated prices, and many poor countries will be left out and will suffer tremendously.
Things are even worse in Italy.  As I covered the other day, some farmers in Italy have already lost "up to 80% of their harvest"...
In Italy, farmers in some parts of the country have lost up to 80% of their harvest this year due to severe weather anomalies, the Coldretti farming association said Thursday.
So where will Italy get enough food to feed their population?
Just like the British, the plan to get it from someone else.
But who is the someone else going to be?

Here in the United States, agricultural production is going to be way below expectations because of the endless drought that is plaguing about half the country.
Just yesterday, I wrote an article about how tomato production is being absolutely devastated in the state of California.
It is being reported that tomato paste prices have already increased by up to 80 percent, and we are being warned that if rain doesn't come soon there simply will not be enough tomatoes to meet demand.
That means that there won't be enough spaghetti sauce and pizza sauce to go around.
For a lot of my readers, that statement is really going to hit home.
Over in Texas, the cotton crop is going to be bitterly disappointing this year...
US cotton prices continued to surge above the boom days of 2010-11 after a massive crop estimate cut by the USDA, shocking Wall Street analysts and traders, due primarily to a megadrought scorching farmland of Texas, according to Bloomberg.
Futures in New York for December delivery were up 4.5% to $1.1359 a pound and up more than 21% this month.
Normally, there would be vast fields of cotton being grown all over the state at this time of the summer.
But this year many of those fields look like barren wastelands...
Last Friday, the USDA's bigger-than-expected cut to domestic cotton crop stunned many on Wall Street. Crop output plunged to 12.57 million bales, the lowest in a decade. The cut also pushed down the US from the world's third-largest producer to the world's fourth.
Barbera said the western Texas region (around Lubbock and Lamesa), the epicenter of America's cotton-growing belt, has "literally nothing" in fields that are just desert sand. He said fields that had drip irrigation were harvestable, but ones that weren't weren't salvageable.
So are we going to experience a shortage of cotton in 2023?
If so, that would be really bad news. Cotton is used in thousands of different products.
Without enough water, we cannot grow the things that we need.
I don't know why this is so hard for people to grasp.

And the truth is that our entire way of life depends on sufficient supplies of fresh water.  Right now, there are seven western states that are facing the prospect of emergency water restrictions in the months ahead because the Colorado River is rapidly drying up...
Two months ago, federal officials took the unprecedented step of telling the seven states that depend on Colorado River water to prepare for emergency cuts next year to prevent reservoirs from dropping to dangerously low levels.
The states and managers of affected water agencies were told to come up with plans to reduce water use drastically, by 2 million to 4 million acre-feet, by mid-August. After weeks of negotiations, which some participants say have at times grown tense and acrimonious, the parties have yet to reach an agreement.
Nobody wants to give up their water.
In the end, all of those states are going to have to make severe sacrifices.  At a minimum, the amount of water being taken from the Colorado River needs to be reduced by 2 million acre-feet, and that is an amount of water that is four times greater than the entire city of Los Angeles uses in an entire year...
The latest round of closed-door talks occurred Thursday in Denver. Participants said they wouldn't publicly discuss the offers of water reductions made, but they acknowledged those offers have amounted to far less than 2 million acre-feet. For comparison, the total annual water use of Los Angeles is nearly 500,000 acre-feet.
Needless to say, this is going to affect agriculture in a major way.
Farmers and ranchers use a tremendous amount of water, and they are about to be hit with restrictions that will be extraordinarily painful.
Everything that I have discussed in this article is happening in the context of a horrifying global food crisis that is getting worse with each passing month.
But don't worry, the elite have a plan.
For a long time they have touted the benefits of eating bugs, and now such products are actually on our store shelves...
On Sunday, carnivore diet guru Dr. Shawn Baker tweeted a photo of a bag of cheddar cheese puffs, only instead of being made of corn meal these snack foods were chock-full of insect protein.
The snack item from Canadian brand Actually Foods states the puffs are "powered by crickets" to the tune of 10 grams of protein per serving.
The ingredients label on the back of the bag indicates "organic cricket flour" was used in the puffs' production, and an allergy warning on the back of the bag also cautions, "People who are allergic to shellfish may also be allergic to crickets."
Doesn't that sound delicious?
Instead of suffering through the nightmarish global famines that are coming, we can all eat "cricket puffs" instead.
Unfortunately, the truth is that they can't make enough "cricket puffs" to rescue us from the "perfect storm" that has hit global food production.
There simply is not going to be enough food for everyone in 2023, and it will be the poorest countries that will suffer the most.
Originally published at The Economic Collapse Blog - reposted with permission.