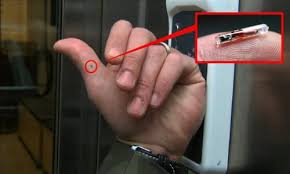 By PNW Staff August 22, 2022
Share this article:
The latest highly controversial technology/policy that the World Economic Forum (WEF) has set out to normalize is the idea of implanting tracking chips into humans.
It wasn't that long ago that those speculating on a future where this is happening would get dismissed as conspiracy theorists, but now the world elites' most vocal outlet is predicting that chip implants will eventually become just a commodity.
And the WEF makes a case that implanting chips into children could be viewed by parents as a "solid, rational" move. All of this crops up in a blog post on the organization's website dedicated to the future of augmented reality (AR), and what is referred to as "an augmented society."
Like in many of WEF's other takes on the future of various types of technology, the emphasis is put on inserting the "right," i.e., its own "vision" in the direction these should be developing, with the inevitable mention of undefined society stakeholders who will hold the key to the ethics issue of it all.

The WEF is talking up the allegedly broad usefulness of AR going forward in fields such as healthcare, education, and professional settings, with the underpinning notion of providing guidelines as to how to "ethically" regulate this vast potential power - and therefore, when all's said and done, control it.
The WEF calls AR and similar tech transformative - but in need of "the right support, vision, and audacity."
Once again it isn't at all clear why "audacity" is thrown in, unless it is a euphemism to sell some pretty outrageous "visions" that the WEF is expressing, such as replacing drugs with brain implants that will manipulate the body with electrical pulses, and pairing all sorts of chips put into humans through surgery, with sensors one might find in a chair.
And so, with the human and the chair "seamlessly integrated," the quality of life across the board shoots up, the Davos-based group promises.
"As scary as chip implants may sound, they form part of a natural evolution that wearables once underwent. Hearing aids or glasses no longer carry a stigma," the blog post reads. "They are accessories and are even considered a fashion item. Likewise, implants will evolve into a commodity."
But critics of these trends say their opposition has nothing to do with "stigmas" - rather with serious concerns about civil rights, privacy, and the very concept of human autonomy.

While the tracking ability is one of the features of microchip implants that is rarely talked about, many people are already on board with using microchip implants for commerce and security access.
Recently, a London-based company has developed a new contactless payment system that involves embedding a microchip into a person's hand.
Tech company Walletmor has developed a new app called Purewrist, which is a digital wallet combined with a microchip that can be installed in your hand. Once the chip is installed, a person can then use the app and chip to make payments to businesses that also use the app.
Walletmore's chip is quite light and is only a bit bigger than a grain of rice and is composed of a microchip and an antenna, which is surrounded by biopolymer. The Chief Executive Officer of the Company, Wojtek Paprota claims that it is entirely safe and also has regulatory approval.
Walletmore has priced the implant procedure at $299 and says the system can be used to make everyday, normal transactions.
The microchip does not need a battery to function nor does it need any other power source which makes it quite attractive to the users. They have sold more than 500 microchips so far.
A 2021 survey conducted in the European Union and the United Kingdom came up with the result that at least 51 per cent of people will consider having a chip implanted in their body.
On the other side of Europe Sweden has been rapidly expanding it's use of microchip technology for quite some time with tens of thousands already microchipped:
Notes and coins now make up less than 1 percent of Sweden's economy which is ironic considering it was the first European country to issue modern banknotes, in 1661.
"No cash accepted" signs are now the norm in shops across Sweden as payments go digital and mobile but many Swedes want to take it to the next level as they blend tech with the human body.

Microchip implants that give people the ability to conduct financial transactions, monitor their health (including vaccination status) and even replace keycards to allow them to enter offices and buildings are the new rage as thousands have already been implanted.
Many technological enthusiasts believe this is the next logical step in a digital society that is quite happy to give up privacy for convenience. That convenience factor is a big reason commuters on the SJ Rail transit system have traded cash for chips:
Many Bible Prophecy experts believe each of these steps is taking us closer to global acceptance of a digital "mark" commonly called "The Mark of the Beast" that will merge technology and commerce with political and religious allegiance as described in the Book of Revelation.
Most Christians recognize that current chip implants are not the actual "mark of the beast", yet there is concern that acceptance of such technology is conditioning people for when the real one does come along.
What often starts off as voluntary can just as easily become mandatory and whereas tech itself may be neutral, in the hands of the wrong person it could be extremely dangerous.  Imagine the technology of today in the hands of Hitler.
Christians have long debated the meaning of the "mark of the beast".  Our generation, however, appears to be the first to have the technology to fulfill this prophecy.
Soon, you may have to answer the question: 'would you get chipped'?
Dig deeper into the Book of Revelation to explore the "mark of the beast" and other current issues facing our world with our Decoding The Future DVD Series - now on sale here.