Why Are So Many Bad Things Happening To America In 2022? 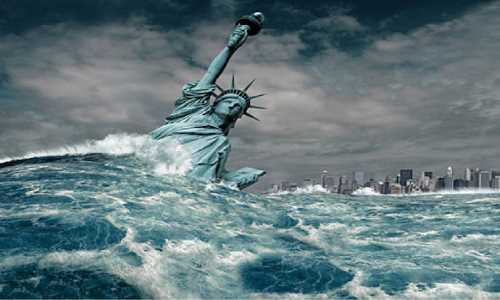 By Michael Snyder/Economic Collapse Blog August 30, 2022
Share this article:
Have you ever wondered why we just keep getting hit by one thing after another?  I grew up during a time when it seemed like America was endlessly blessed, but now everything around us seems the opposite of blessed.
Our economy is imploding, inflation is out of control, the housing market is starting to crash, our weather patterns have gone completely nuts, the western half of the nation is enduring the worst drought in 1,200 years, we are dealing with three major pandemics simultaneously, we are losing our proxy war with Russia in Ukraine and it looks like war with China is just around the corner, and on top of everything else our political system is failing because liberals and conservatives deeply, deeply hate one another.  And if you think that there is hope on the horizon, you are going to be severely disappointed.
The current crop of politicians in Washington is the worst that we have had in our entire history, and all of the "solutions" they give us just seem to make matters even worse.
This weekend, I came across a very intriguing article in the Jerusalem Post entitled "Is God punishing the United States of America?"
It was authored by a prominent businessman named Sherwin Pomerantz, and it really got me thinking.
Could it be possible that there is a common thread that connects all of the bad things that are constantly happening to us?

In his article, one of the points that Pomerantz makes is that America's political system is coming apart at the seams right in front of our eyes...
Politically, whether people want to admit it or not, the country is in the midst of a civil war, though for the moment, not one where both sides have taken up arms, one against the other (although that, too, could eventuate).
Sadly, he is right on target.
There is so much politically-motivated hatred in our country today.  Liberals deeply hate conservatives and conservatives deeply hate liberals.  It would seem that it is only a matter of time before the entire system shatters.
On another note, Pomerantz believes that it is no coincidence that our weather patterns have gone totally haywire and that our nation is being constantly hit by natural disaster after natural disaster...
Then there is the weather. On average, the US experiences fewer than 1,500 tornadoes a year. Through June, there have already been 940 reported tornadoes there, which means the country is on track to see 2,000 or more, a 33% increase year-on-year.
The nightly news out of the US for the past few months shows tens of millions of people under extreme weather risk every day, often in three different areas of the country simultaneously (upper Midwest, East coast and the Southeast region).
In the west, a long period of drought has been drying up reservoirs and spawning massive forest fires. National Interagency Fire Center (NIFC) statistics show that as of July 5, 34,478 fires have already burned 4,582,301 acres. This is above the 10-year average of 27,346 fires, and twice the average of 2,026,917 acres burned. The odd thing is that very little of this occurs just north of the US in Canada, or just south in Mexico. It all seems to be centered in the US.
I did find it odd that Pomerantz only briefly mentioned the drought, because it is actually a really big deal.
At this moment, the western half of the nation is in the midst of the worst multi-year megadrought that the region has experienced in 1,200 years, and this is having an absolutely devastating impact on agricultural production.

For example, we are now being warned that a very serious shortage of tomatoes could soon be coming...
As endless supply chain-related food shortages force people to adjust their grocery lists, another essential ingredient is becoming scarce. Along with avocados, cream cheese, chickpeas, and olive oil, the supply of tomatoes has started to dwindle. But this time it's California's catastrophic drought conditions denying farmers the water needed to grow the versatile vegetable that's to blame. Due to the shortage, the price of byproducts like ketchup, salsa, and spaghetti sauce has started to surge.
Speaking about the tomato shortage, Head of the California Tomato Growers Association Mike Montana said the golden state desperately needs rain. "We are getting to a point where we don't have inventory left to keep fulfilling the market demand," he told Bloomberg News.
California, which grows a quarter of the world's tomatoes, is in the middle of a historic drought that has stoked massive wildfires while drying up reservoirs. It has also become a major threat to the agriculture industry.
When I was growing up, I never once imagined that there could ever be a shortage of tomatoes in this country.
But things have changed, and life in the U.S. will never again be like it was when I was a little boy.
Although to be honest I am having flashbacks to the 1970s with all of the inflation we are witnessing right now.
In fact, if the inflation rate was still calculated the way that it was back in 1980, it would be higher than anything that we experienced during the Jimmy Carter era.
Over the past couple of years, our politicians in Washington have gone on the most dramatic borrowing and spending binge in human history, and the "experts" at the Federal Reserve pumped trillions of fresh dollars into the financial system.
Of course that was going to cause inflation, and now we have a colossal mess on our hands.
The Federal Reserve is recklessly hiking interest rates in a desperate attempt to battle inflation, but everyone knew that this would inevitably cause a housing crash.
And as I pointed out last week, a housing crash has already begun.

This July, new home sales were about 30 percent lower than they were last July...
The plunge in home sales is just stunning. Sales of new single-family houses collapsed by 12.6% in July from the already beaten-down levels in June, and by nearly 30% from July last year, to a seasonally adjusted annual rate of 511,000 houses, the lowest since January 2016, and well below the lockdown lows, according to data from the Census Bureau today.
Sadly, this is just the beginning.
If the Fed keeps raising rates, things will get far worse.
Meanwhile, we find ourselves battling three major pandemics all at once.
Despite everything that our health authorities have done, COVID is still with us and will be with us for many years to come.
If that wasn't bad enough, a bird flu pandemic has erupted this year which has resulted in tens of millions of our chickens and turkeys being wiped out.
On top of that, a new monkeypox outbreak continues to spread at an exponential rate all over the planet.
Is it just some sort of a bizarre coincidence that we are now facing three major pestilences simultaneously?
Of course this article would not be complete unless I talked about the war.
We are now deeply involved in a proxy war with Russia in Ukraine, and it is not going very well.
And if both sides continue to escalate matters, we could eventually find ourselves in a nuclear conflict with Russia which would have the potential to ultimately kill billions of people.
In addition, the warmongers in the Biden administration have also brought us to the brink of a war with China.  More U.S. politicians keep flying over to Taiwan, and at some point the Chinese are going to decide that they simply cannot take any more provocations.
Also, it is just a matter of time before Iran and Israel go to war.  And once that happens, the U.S. will inevitably decide to intervene.
In this article, I have covered war, plagues, economic collapse and natural disasters among other things.
Could it be possible that all of these things are happening at this specific moment in human history for a reason?
And could it be possible that we were warned in advance that all of these things would be coming? (Bible Prophecy)
My hope is that this article will get people thinking.
All of human history has been building up to a grand crescendo, and we get to be here for it.
Unfortunately, the vast majority of the population has no idea what is ahead, and so most of them are going to be absolutely blind-sided by the cataclysmic events that are rapidly coming our way.
To learn more about Bible prophecy and what is still to come we recommend the DVD series "Decoding The Future - A Lifechanging Journey Through The Book Of Revelation" - available here.