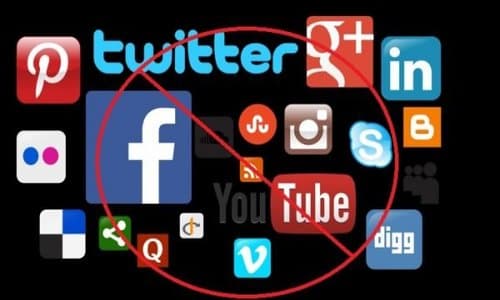 By Tiar’a Literary & Illustrations September 17, 2022
Share this article:
On September 13th, 2022, Governor Gavin Newsom, of the golden liberal state of California, signed a nation-leading social media act [AB-587] into law that was created by California Assembly Member, Jesse Gabriel (D-Encino).
The law will enact in 2024 and will forever alter the course of American ideologies. Henceforth, social media companies, businesses, schools, and other community sites that put forth such platforms, will be severely monitored. Any company or persons using social media to express opinions that explicitly contradict those established as "agreeable" by local and national governing bodies will be liable for permanent censorship, fines and/or potential prosecution.
The revolutionary act  is a historic "first-of-its-kind". Clearly, the new law directly violates America's age-old First Amendment Rights of the American Constitution regarding "freedom of speech" and is promoted as a wonderful idea that will protect children and vulnerable communities. Communities highlighted by California Assembly Member, Jesse Gabriel were: "women, people of color, members of LGBTQ community, Jews and other religious minorities and immigrants".

Assembly Member Jesse Gabriel additionally mentioned the COVID-19 pandemic and stated: "Sixty-five percent of vaccine misinformation is online. This is misinformation that has been directly related to vaccine hesitancy and refusal. And that's why we're calling today for the passage of assembly bill 587, the social media transparency and accountability act of 2022".
The new California social media law has been marketed to the public to "protect Californians from online hate, disinformation, harassment, and extreme opinions". But the unanswered question that remains is: What are extreme opinions? What is disinformation? Both are undeniably tumultuous, albeit virtually impossible to specify.
Perhaps a simple definition of the new law would read: You better not write, endorse, or even mention anything that goes against the status-quo, such as anything that contradicts "Woke", abortion rights, women's rights, black rights, Hispanic rights, rapper rights, mental illness, or LGBT+ beliefs, OR anything of the sort that is in defiance of God's Laws. If you do, your social media rights will be terminated, you will be fined and/or prosecuted, fired, and/or your business shutdown.
Essentially the new law will further support the notion that Bible-believers have no rights to practice or announce their beliefs.

Sadly, the new law will not extend to persecute against vial, foul, sexually explicit speech, or online advertisement of acts and opinions contradictory to the Holy Bible, and/or remarks that contradict traditional morals, values, and ethics that affect us all. Nor will the new law prohibit violence and sexuality [as in Hollywood motion pictures and television, and video games]. No. These worldly pandemics that truly offend, hurt, destroy, and pollute the mind will remain perfectly permissible and are not in any way affected by the new law - said to protect us all.
Upon closer inspection it becomes apparent that the new law will not protect children nor adults for that matter, because smut is not being banned from the internet - regardless of age-appropriate guidelines.
Assembly member, Jesse Gabriel said that the new law will require social media companies to publicly post their policies regarding: hate speech [to and against whom? Or, what? We do not know], disinformation [not defined],harassment, and extremism [not defined], on their social media platforms so that users will feel comfortable knowing that they are in safe virtual reality environment.
Social media companies and/or business websites must now report all data collected from users of their websites moving forward to enforcement agencies. The enforcement agencies will then review and monitor online activity and decide whether anyone using said sites are in violation of the new law. If they are, "Off with their heads!" - well, perhaps not quite yet.
On some positive note, the new law will create a slew of new remote job opportunities in the Golden state. The reality is, there are not enough staff required to monitor all social media posts and platforms, but then again, who will be the newly hired staff that will oversee monitoring? Will they be God-fearing? Or will these employees be specifically selected as "neutrals", or possibly nihilist who believe is nothingness: No morals, no ethics, no fear of the Lord?

Will this only flame the already towering inferno of troubles in California, the country, and the world? Will the social monitoring team promote a modern-day witch-hunt, and act as tattle-taler's that will persecute whomever or whatever is deemed to go against government "beliefs"?
The Governor of California, Gavin Newsom said, "California will not stand by as social media is weaponized to spread hate and disinformation [yet to be clearly defined] that threaten our communities and foundational values [whose and what values?] as a country.
Californians deserve to know how these social platforms are impacting our public discourse, and this action brings much-needed transparency and accountability to the policies that shape the social media content we consume every day. I thank Assembly member Jesse Gabriel for championing this important measure to protect Californians from hate, harassment and lies spread online."
It's a pity, as previously stated, that the law does not seek to reprimand and silence the true perpetuators of vial and negative social content [media and entertainment companies]. What is deeply concerning about the new California law is that certain stipulations within it are undefined, might not be defined, and that in fact could be utilized to suit whoever is in charge at that time. This law is the opening door to subtly creep in censoring Bible-believing Christians under the guise of protecting children.
Sadly, those who uphold Gods laws and traditional moral values have been and will further be demonetized and associated with true extremists who vehemently oppose God's laws when this state law takes effect.
(Matthew 10:22 "And you will be hated by all for my name's sake. But he who endures to the end will be saved") NKJV
We Bible-believers all knew this day was looming, and unfortunately as of September 13th, 2022, it has dawned.
Written by Tiar’a Literary & Illustrations
We are a professional literary and illustration company. "If you are interested in assistance writing a book, e-book, or are in need of marketing, blog, article writing services, or illustrations, please contact us via email at:  tiarapublications@gmail.com