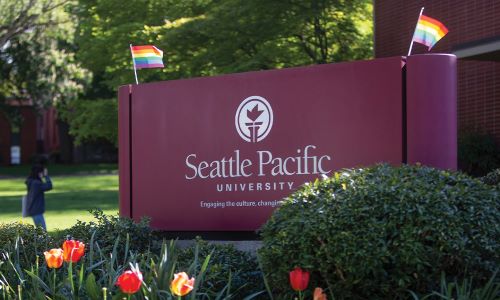 By Joshua Arnold/Washington Stand September 19, 2022
Share this article:
Seattle Pacific University (SPU) has sustained so many serious attacks over the past few years that it could use a little comic relief. In a new lawsuit filed Monday in Washington Superior Court, that's exactly what its critics provide.
Founded by the Free Methodist Church USA (FMC) as Seattle Seminary, SPU has come under fire for expecting of employees a lifestyle consistent with biblical standards, as set forth in a detailed, nuanced Statement on Human Sexuality, which says that sex should be limited to "the context of the covenant of marriage between a man and a woman."
The controversy has accelerated over the past two years. In January 2021, an adjunct professor, who is married to another man, sued the university after he was denied a full-time position. In response, pro-LGBT forces on campus began to mobilize, provoking the Board of Trustees in May 2022 to reaffirm its employee lifestyle expectations "to reflect a traditional view on Biblical marriage and sexuality, as an expression of long-held church teaching and biblical interpretation."
The next day, hundreds of students walked out of class to protest. Weeks later in June, graduating seniors handed pride flags to the school's interim president, instead of shaking his hand.

During the summer, a new opponent entered the fray against SPU. State Attorney General Bob Ferguson began investigating the school for "possible discriminatory employment policies and practices," and demanded information on their hiring and firing policies.
In July, SPU sued Ferguson in federal court for violating its religious freedom, including the "right to hire Christian faculty and staff." Ferguson responded, "the lawsuit demonstrates that the University believes it is above the law to such an extraordinary degree that it is shielded from answering basic questions from my office regarding the University's compliance with state law."
In the lawsuit filed Monday, 12 students and staff members repeated that argument. They began, "this case is about six men who act as if they, and the educational institution they are charged to protect, are above the law." The act of filing suit in a court of law is now interpreted as acting "above the law."
"They are powerful men," they continue, "who use their positions, as trustees of Seattle Pacific University ('SPU'), to advance the interests of a religious denomination at the expense of the students, alumni, staff, and faculty of the university." Oh boy, the language is dripping with Marxism already.
The lawsuit describes a zero-sum contest between two groups, the empowered and the powerless, with seeking their own interest portrayed as the only possible motive. Even if true, is it too much to ask that a denomination benefit from a university it founded as a seminary?

But this cynical description displays zero comprehension of an institution's purpose. The lawsuit had just stated, more accurately, that the trustees were "charged to protect" SPU. That is, their mission is to preserve and advance the long-term success of SPU as a private Christian university, not sacrifice the identity and mission to the whims of its current occupants. To leftist radicals, institutions can have no purpose than to be captured and cannibalized for a short-term advantage.
After defining religion as the enemy, these Marxists proceed to declare war on it. "Plaintiffs do not doubt the sincerity of Defendants' religious beliefs and denominational allegiances. This case is not about whether Defendants' religious beliefs are right or wrong. This case is about accountability." Did they think this paragraph made them sound reasonable? It doesn't matter if their beliefs are right; we just want to punish them for holding them. This, increasingly, is the preferred tactic for those unskilled in logic but experts at usurping and abusing power.
Finally, in the fourth paragraph, they broach an accusation relevant to an American courtroom. These trustees placed "their personal religious beliefs above their fiduciary duties" which "inflicted trauma on their fellow trustees and the entire campus." You can believe anything you want, so long as it stays in your own head. But live according to your beliefs, and you, too, can inflict trauma on others.
For the Left, religion deserves all the freedom of a firearm in New York -- you can have one, so long as it stays disassembled, locked in a box, unusable, and hidden from public view.
At this point, the lawsuit injects so much melodrama that it nearly drowns out their complaint, which is "a discriminatory hiring policy." They opine that the policy has "undermined, and has torn apart, the heart and soul of SPU." Universities do not have literal hearts, much less souls, that can be literally torn apart, much less undermined.
Perhaps metaphorically, a "heart and soul" refers to a university's distinctive character; SPU is fundamentally a Christian university that remains committed to upholding a biblical view of human sexuality. It seems that six courageous trustees have courageously preserved this character against those who would destroy it.

What's more, the lawsuit complains, the policy is "loathed by the SPU community." With thousands of students, only hundreds protested the policy -- not to mention hundreds of staff and tens of thousands of alumni. Yet these 12 individuals presume to speak for the whole community. The sense of the community, as these members express it, is not a rational conclusion but an intense feeling. How dare your conscience, and the preservation of this aged institution of learning, prevail against my feelings!
The lawsuit then indulged in alternate reality. "This group of six men formed a rogue board, within the SPU Board of Trustees ('BOT'), who seized power from the loyal members of the BOT. The rogue board's power has been achieved through the silencing and exclusion of the loyal members of the BOT." When the BOT voted on to abandon the university's biblical sexuality standards, "the rogue board turned the board vote into a farce. ... In fact, the rogue board rigged the May 2022 BOT vote." I'm not sure what movie they're watching, but you can't rig a vote when you can literally count all the noses.
According to the lawsuit, the university remains affiliated with the FMC, and dissolving this affiliation requires a 75% supermajority of the Board of Trustees. Not surprisingly, several members of the Board of Trustees also hold leading roles in the FMC.
To safeguard the denomination's integrity, they introduced a successful FMC resolution to the effect that any affiliated organization that relaxed its hiring policy on sexuality "will be considered to have disaffiliated with the denomination." They then recused themselves from the trustee vote on sexuality policy, and yet the vote still failed to reach the required 75% threshold.
Nor do they explain how the vote was rigged, and an editorial sympathetic to their cause said the board did not disclose how individual members voted. Even if they can't explain how, the vote simply must be rigged, because their wishes are too important to accept defeat. Now where have I heard someone make that argument before? Unfortunately for them that's how voting works; to win, you must have a majority of votes cast in your favor.
There's much more of the same throughout the lawsuit's 56 pages. In one absurd section, the lawsuit alleges, through an anonymous, indirect quote, that "the rogue board, in upholding homophobia, are also 'upholding a system ofwhiteness.'" The "rogue board" members include at least one person of Asian descent, and one of Hispanic descent.
Yet the lawsuit asserts that they "derive power from their associations with extremist and supremacist organizations that working together, knowingly or unknowingly, perpetuate a form of white Christian supremacy." And of course, the only infallible way to recognize an extremist organization is if they're "designated an anti-LGBTQ+ hate group by the Southern Poverty Law Center." Ah, now it all makes sense.
Somehow, by reaffirming SPU's standing policy and preserving its denominational affiliation, this lawsuit insists "these men abandoned ... their duty of obedience to SPU's governing documents ...." Somehow, by recognizing a denomination's beliefs in the hiring practices of organizations affiliated with that denomination, this lawsuit insists that these board members violated state law, and aren't entitled to religious protection. Somehow, the lawsuit insists that the Washington attorney general remove these board members from office, and it demands damages to be determined by a jury trial.
Religious freedom is meaningless if it does not grant religious institutions the right to govern its own members and fill its own offices according to its own beliefs. This unserious lawsuit represents a serious threat under the laws of the state of Washington, but it is entirely incompatible with religious freedom. If justice is done, it should ultimately fail.
Originally published at The Washington Stand - reposted with permission.