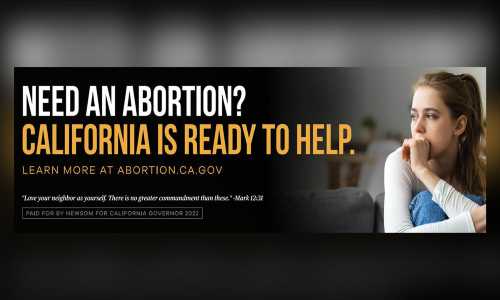 By Joshua Arnold/Washington Stand September 20, 2022
Share this article:
California Governor Gavin Newsom on Thursday cited the words of Jesus from Mark 12:31 in support of abortion, "Love your neighbor as yourself. There is no greater commandment than these." The billboard campaign advertises California abortion in seven pro-life states -- Indiana, Mississippi, Ohio, Oklahoma, South Carolina, South Dakota, and Texas.
The advertisements are paid for by Newsom's reelection campaign, and Newsom tweeted the ads at the respective governors of those states from his personal account, presumably because he understands that the campaign is nothing but a political gimmick unworthy to be funded by California's overburdened taxpayers.
There is already talk that if Joe Biden declines to run for re-election Newsom will be throwing his hat in the ring.  Is this the type of man we want leading the country?

If Newsom was aiming to cause a reaction, he succeeded. While the billboard campaign itself is unremarkable political grandstanding, invoking the words of Jesus to defend abortion provokes a refutation. Newsom understands that most of abortion's fiercest critics are Christians. So he chooses to promote abortion in the words of the very same Son of God who "Morning Joe" Scarborough insisted on September 9 "never once mentioned" abortion.
To rightly understand and apply Mark 12:31, the preceding context is critical:
And one of the scribes came up and heard them disputing with one another, and seeing that he answered them well, asked him, "Which commandment is the most important of all?" Jesus answered, "The most important is, 'Hear, O Israel: The Lord our God, the Lord is one. And you shall love the Lord your God with all your heart and with all your soul and with all your mind and with all your strength.' The second is this: 'You shall love your neighbor as yourself.' There is no other commandment greater than these." (Mark 12:28-31, with the portion cited in Newsom's billboard in italics)
These verses establish that the command to love our neighbor is actually the second-most important commandment, after the command to love God. In a parallel passage (Matthew 22:36-40), Matthew records that Jesus adds that the second commandment is "like" the first. In other words, these two commandments are inseparable, with the second commandment flowing naturally out of the first.
Jesus also states in Matthew that "all the Law and the Prophets" depend on these two commandments. In other words, the rest of the Old Testament is God's commentary on what these commands mean. Perhaps Newsom and his staff didn't intend to misapply the verse, but it's easy to do when taken out of context.
What does it mean to love God and love our neighbor? The Ten Commandments (Exodus 20, Deuteronomy 5) are a good place to start. The first four commandments tell how we ought to behave towards God, while the last six commandments tell how we ought to behave towards our neighbor. Most of the laws God gives in Exodus, Leviticus, Numbers, and Deuteronomy reasonably proceed from these principles. Most of the prophets' moral condemnations have to do with the people violating these commandments.

The commandment most relevant to the issue of abortion is the sixth commandment, "you shall not murder." Surely this is an essential part of loving our neighbor. I'm not begging the question; both sides base their position on the principles of this commandment.
The pro-abortion position might argue that killing another person is wrong because people are made in the image of God (Genesis 9:6). Therefore, they have inherent worth and dignity. This dignity involves a certain personal, bodily autonomy that makes it wrong for a person (or entity, like the government) to do anything to another person's body (Exodus 22:26-27, Leviticus 24:19-20) or tell them what to do to their body. They argue that a woman's right to bodily autonomy extends to characteristics such as pregnancy, and that others may not interfere with her decision.
The pro-life position agrees that killing is wrong because people are made in God's image and possess inherent worth and dignity. They argue that an unborn child therefore possesses dignity and is made in the image of God. On that basis, killing an unborn child is wrong. They deny that a woman's bodily autonomy is infringed by fulfilling its natural function of bearing offspring and carrying them to term.
A pregnancy is not an impersonal inconvenience that has been forcibly imposed on a woman against her will (rape excepted, but that's another can of worms); it is a new, distinct human being, whom God has created in his own image and in that of his parents.
It should be clear why Christians (at least, those who believe in the primacy and inerrancy of Scripture) have historically found the latter interpretation a more direct and plausible application of the principles of God's law to the question of abortion.
If further evidence is needed, let's approach the question from another angle. "For God so loved the world, that he gave his only Son, that whoever believes in him should not perish but have eternal life" (John 3:16). In what way has God loved the world? By giving his Son for it. "Greater love has no one than this, that someone lay down his life for his friends" (John 15:13).
In what way did Jesus show his love for his bride? By giving his life for her. Love gives what is good; it does not take. It only withholds what is bad. Even evil people "know how to give good gifts to your children" (Luke 11:13) because of their natural love for their offspring.

What love is there in the hideous cruelty of abortion? An unborn child is deprived of life. He is poisoned or ripped to pieces. Every sunset, every smile, every meal, every birthday, every friendship, every tender moment, every ounce of affection that he would have enjoyed has been prematurely cut off. All because his life is inconvenient for those who would spend their lives pleasing themselves. Is this the love a mother owes her child? Most women understand that it isn't. They experience deep regret for having ended their unborn child's life. What compassion do they receive from a society that insists they did nothing wrong.
Many women are pressured into abortion. Where is the care shown by a man in a white coat who counsels her to end life, instead of endeavoring to preserve it? Where is the love from her family or the child's father in forcing such an awful decision upon her? Where is the tender regard for her feelings, or for her child? Where is the desire to sacrifice for her, bearing with her through the hard years ahead?
What love is there in the hideous cruelty of abortion? This is a question for the conscience. Abortion's apologists may distract the conscience with shallow platitudes, but they cannot assuage the guilt. Nor can they justify ending the life on an unborn child on the grounds of human dignity and bodily autonomy. Nor can they twist the words of Jesus to serve their evil cause. You will find more love for women with unplanned pregnancies in a single pregnancy resource center, which the Left calls a "false clinic," than in every abortion mill in America.
On this, the prophets are not silent, "Woe to those who call evil good and good evil, who put darkness for light and light for darkness, who put bitter for sweet and sweet for bitter! Woe to those who are wise in their own eyes, and shrewd in their own sight!" (Isaiah 5:20-21). Woe to those who call cruelty love and love cruelty.
Originally published at The Washington Stand - reposted with permission.