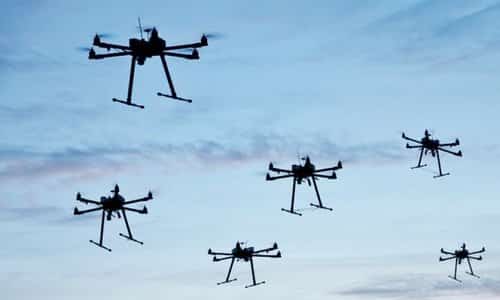 By PNW Staff September 20, 2022
Share this article:
While unmanned aerial vehicles such as the multi-million dollar General Atomics MQ-1 Predator are armed with missiles, a new generation of inexpensive "kamikaze" drones is reshaping the battlefield.
The US military worries that these low-cost and deadly-effective drones could shift the global strategic balance away from the US on the modern battlefield.
To counter such emerging threats, the Army decided to conduct a field training exercise involving "a swarm of 40 quadcopters all equipped with cameras, MILES, and lethal munition," tweeted the Commanding General of the National Training Center and Fort Irwin.
The startling video (tweeted on Sunday evening) shows the quadcopters zooming by what appears to be a makeshift desert town.

"Drones will be as important in the first battle of the next war as artillery is today," the Army's Twitter account concluded.
The weaponization of such drones is even more powerful as some have been turned into suicide drones.
The Pentagon has supplied Ukraine with over 700 Switchblade "kamikaze" military drones. The future of warfare appears to be clear to the Army: small suicide drones for precision strikes will be necessary on any modern battlefield.
Several other militaries have been working on developing Artificial Intelligence that allows the drones to work together without the need for an operator.
The basic idea of a drone swarm is that its machines are able to make decisions among themselves.
The swarm continue its mission, even if loses some drones during its mission.
The machine learning system is fed with data sourced from satellites, other reconnaissance drones, and aerial vehicles, as well as intelligence collected by ground units.

China is one of the nations leading the charge on the development of drone swarm technology.  Some reports indicate that China has successfully tested a swarm of one thousand drones. And China appears to be interested in swarm capability as a method of attacking US aircraft carriers.
Several test simulations by the US Navy have shown that drone swarms are consistently able to get past ship defenses that are geared towards shooting down single planes. This weakness means it makes sense to attack an enemy ship with a large number of cheap drones rather than one missile costing the same.
Ironically, the best counter to drone swarm attacks being studied is a defensive drone swarm that can intercept the offensive ones, thus creating a virtual drone swarm war.
Some prophecy watchers find it interesting that the Bible describes "locust" type creatures that play a significant role in end-time conflict.  Revelation 9 describes them this way:
"The shape of the locusts was like horses prepared for battle. On their heads were something like crowns of gold, and their faces were like faces of men. They had hair like the hair of women, and their teeth were like the teeth of lions. They had breastplates like breastplates of iron, and the sound of their wings was like the sound of chariots with many horses running to battle. They had tails like scorpions and stings in their tails. Their power was to hurt men for five months. They had as king over them the angel of the bottomless pit, whose name in Hebrew is Abaddon, and in Greek his name is Apollyon." (Revelation 9:7-11).
What on earth was the Apostle John talking about? Exactly what kind of locusts did he witness on the Isle of Patmos where he received these prophetic revelations?

The traditional interpretation is that these locusts could be evil entities and/or demonic physical or spiritual beings that will rise up out of the bottomless pit (abyss) to torment people and assume the characteristics of locusts.
Others speculate they may be some form of grotesque variation of natural locusts as we know them today (perhaps even some form of chimeras or other DNA manipulation that scientists are now moving ahead with), or did John the Apostle perhaps see some advanced military aerial machinery that he lacked the words to describe?  Even the commentator in the video below refers to the drone swam as looking like a 'swarm of locust'.
These revelations were given to John about 2,000 years ago when there would have been no way for him properly to describe 21st-century technological inventions that would follow many centuries later. Is it possible John was describing some type of technology in our day similar to the drone swarms?
Learn more about China's drone swarm advances and it's direct threat to the US here: