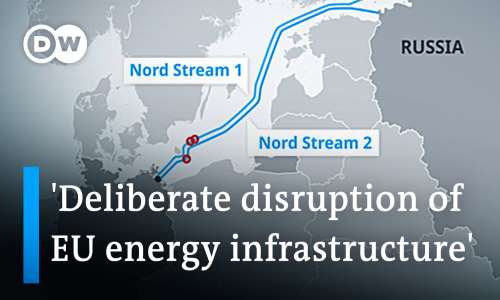 By Michael Snyder/End of the American Dream September 29, 2022
Share this article:
Something really strange just happened.  On Monday, large underwater "explosions" were detected in the precise areas of the sea where the Nord Stream pipeline system is now leaking.  In fact, the explosions were so large that they actually registered on the Richter scale.
If someone wanted to purposely damage the Nord Stream 1 and Nord Stream 2 pipelines, very large explosions would be needed because those pipelines are extremely thick.  So it appears that this was a deliberate act of sabotage, and that is what many European officials are now alleging.  But if that is the case, who was behind it?
At this point we just don't know.
But there are certain facts that we do have.  The following are 14 things we know about the "mysterious explosions" that severely damaged the Nord Stream 1 and Nord Stream 2 pipelines...

#1 We are being told that the sections where the pipelines were damaged are "70-90 meters below sea level".  So someone would need to go down pretty deep to get to them.
#2 It is extremely unlikely that these pipelines could have been ruptured by accident because they are extremely thick...
The steel pipe itself has a wall of 4.1 cm (1.6 inches) and is coated with steel-reinforced concrete up to 11cm thick. Each section of the pipe weighs 11 tonnes, which goes to 24-25 tonnes after the concrete is applied.
#3 It is being reported that explosions "were heard" in the areas where gas is now leaking out of the pipelines...
Explosions were heard near the Nord Stream 1 and 2 pipes where gas is now leaking into the Baltic from three holes, scientists have confirmed, while chronic safety concerns have led to a five-mile exclusion zone being imposed around the affected area.
#4 The Swedish National Seismic Network detected one explosion that registered 1.9 on the Richter scale and another one that registered 2.3 on the Richter scale...
Two powerful underwater explosions were detected on Monday in the same area of sea as the Nord Stream gas leaks, according to the Swedish National Seismic Network.
The monitoring network said the first explosion occurred on Monday at 2:03 a.m. Swedish time with a magnitude of 1.9 on the Richter scale, followed by a second at 7:04 p.m. on the same day with a magnitude of 2.3.
#5 The largest leak is reportedly "spreading bubbles a good kilometre (3,280ft) in diameter"...
It comes after shocking footage released earlier today by the Danish military from a flyover of the affected region showed huge swathes of the sea near the Danish island of Bornholm churning as the gas bubbled to the surface.
A military statement claimed that the largest leak 'is spreading bubbles a good kilometre (3,280ft) in diameter. The smallest is creating a circle about 200 metres (656 feet) in diameter', while the head of Denmark's Energy Agency said it could take up to a week for gas to stop draining into the sea.

#6 German officials are claiming that this was a deliberate act of sabotage...
Germany is reportedly far less hesitant, however, with officials believing sabotage is virtually the only plausible cause for the leaks.
"We can't imagine a scenario that isn't a targeted attack. Everything speaks against a coincidence," a government official reportedly told German newspaper Der Tagesspiegel.
#7 Interestingly, this incident took place just one day after thousands of German protesters took to the streets and demanded the opening of the Nord Stream 2 pipeline...
Thousands of protesters took to the streets in the northeastern German seaside town of Lubmin on Sunday, urging officials to put into service the halted Nord Stream 2 pipeline project that was designed to transport fuel from Russia to Germany.
Germany had stalled the launch of the ambitious energy project for months before putting it on the back burner in the wake of Russia's military operation in Ukraine, which is now in its eighth month.
#8 The prime minister of Denmark also believes that this was a deliberate act of sabotage...
Danish Prime Minister Mette Frederiksen has said her government believes the leaks were caused by 'deliberate actions', adding that the gas supply pipeline will be out of action for around a week.
She said this evening: 'It is now the clear assessment by authorities that these are deliberate actions. It was not an accident. There is no information yet to indicate who may be behind this action.'
#9 The Ukrainians are blaming the Russians for the explosions...
It comes after Kyiv's presidential advisor Mikhaylo Podolyak said on Twitter: 'The large-scale gas leak is nothing more than a terrorist attack planned by Russia and an act of aggression towards the EU.'
Podolyak accused Russia of seeking to 'destabilise the economic situation in Europe and cause pre-winter panic'.
#10 It is being reported that the CIA recently warned Germany about a potential attack on the pipelines...
German magazine Spiegel said the US Central Intelligence Agency (CIA) recently warned Berlin about the increasing signs of a possible planned attack on the Nord Stream pipeline system.
Spiegel reported, citing unnamed sources, that the CIA tipped off Berlin in the summer about possible attacks on NS1 and NS2.

#11 A Polish member of the European Parliament seems absolutely convinced that the United States was behind the attack...
A former Polish Defense Minister, Radek Sikorski, has attributed to the United States the sabotage of two pipelines, Nord Stream 1 and 2, which carry natural gas from Russia to Germany. "Thank you, USA," Sikorski wrote on Twitter. Sikorski was Minister of National Defense from 2005 - 2007 and served as Deputy Minister of National Defense and Deputy Minister of Foreign Affairs, previously. He is currently an elected member of the European parliament.
Nord Stream 1 and 2 lie on the bed of the Baltic Sea. Nord Stream 2 was finished last year but Germany never opened it because Russia invaded Ukraine on February 24.
#12 Joe Biden previously threatened to "end" the Nord Stream 2 pipeline if Russia invaded Ukraine: "If Russia invades...then there will be no longer a Nord Stream 2. We will bring an end to it."
#13 Victoria Nuland has also previously threatened the Nord Stream 2 pipeline: "If Russia invades Ukraine, one way or another, Nord Stream 2 will not move forward."
#14 Meanwhile, European officials just gathered for a ceremony "to mark the opening of the new Baltic Pipe"...
Leaders from Poland, Norway and Denmark have attended a ceremony to mark the opening of the new Baltic Pipe, a key stage in the drive to wean Poland and Europe off Russian gas.
The pipeline will transport natural gas from the Norwegian shelf via Denmark and through the Baltic Sea to Poland. It is the centrepiece of a Polish strategy to diversify away from Russia that began years before Moscow's February invasion of Ukraine triggered a global energy crisis.
The flows from Norway along with supplies via liquefied gas terminals are central to Poland's plan. The country was cut off from Russian gas supplies in April, allegedly for refusing to pay in roubles.
So what does all of this mean?
I don't know.
Some experts are already saying these explosions have resulted in irreparable damage and will reshape the flow of energy in the region.
Israel may become an even bigger player in Europe's energy needs as earlier this year is signed a historic deal with the European Union to export natural gas through the year 2050.  Could this wealth of energy resources from Israel open the door to Ezekiel's prophecy that Russia invades Israel for the purpose of taking a 'spoil'?
No matter how bad the damage is this certainly is not going to be good for the rapidly growing energy crisis in Europe.
Many European governments are now putting their energy infrastructure on heightened alert and the European Union has promised a 'strong response' to whoever might be responsible.  The UN will be meeting over the incident on Friday.
It is going to be a bitterly cold winter all over the continent, and there will be a lot of anger.
As I keep warning, the comfortable lifestyles that we are all currently enjoying will soon be rudely interrupted.
Everything is changing, and a lot of pain is on the horizon.
So I would encourage you to monitor global events very, very closely in the months ahead, because they are going to have very serious implications for every man, woman and child on the entire planet.
Originally published at End Of The American Dream - reposted with permission.