Whither The Two-State Model When Hamas Seizes Power In The West Bank? 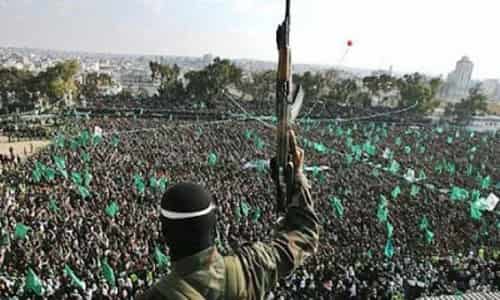 By James Sinkinson/JNS.org October 04, 2022
Share this article:
Those who blithely advocate a "two-state solution" between Israel and the Palestinians invariably avoid addressing many seemingly intractable obstacles facing such a resolution to the conflict.
That the current Palestinian dictatorships are harshly authoritarian and corrupt--and their economies functionally bankrupt--seems to matter little. Two-state proponents rarely offer solutions to these huge problems.
That neither Hamas in Gaza nor the Palestinian Authority in Ramallah have ever agreed to accept the Jewish state or live with it in peace following an actual peace agreement likewise receives little encouraging commentary from two-staters.
But perhaps the greatest obstacle--certainly from Israel's standpoint--is the likely imminent seizure by Hamas of the Palestinian Authority-controlled territory in Judea and Samaria (aka the West Bank).

Certainly, the frailty of 87-year-old P.A. president Mahmoud Abba fuels fear of a collapse of the Palestinian political order--if it can be called that--creating a power vacuum.
While Abbas has finally named a would-be successor--Hussein al-Sheikh, whom Abbas appointed secretary general of the Palestine Liberation Organization--al-Sheikh's transition to the presidency is not guaranteed.
In fact, in a recent interview, al-Sheikh insisted that only an election can settle the succession question. However, polls show that in an election held today, Hamas strongman Ismail Haniyeh would most surely defeat Abbas. We can assume he would also easily defeat little-known Abbas apparatchiks like al-Sheikh.
Al-Sheikh also admits that the political situation in Palestinian-controlled areas is unstable and dangerous for P.A. politicians, noting that their limited power is only ensured by their willingness to cooperate with Israel. In other words, Israel is propping up their regime.
At the same time, Israel has seen a marked increase in terrorist activity by Hamas in Judea and Samaria.
Of course, the threat of a Hamas takeover of West Bank territory has deep, bitter roots in Palestinian history. Shortly after Hamas won Palestinian elections in 2006--beating Abbas's Fatah party--it seized control of Gaza and expelled all Fatah members.

Fatah's relationship with Hamas over 16 long years has generally been angry and violent, and many attempts at reconciliation have failed. While Fatah brands itself to gullible Western diplomats as the "reasonable" Palestinians, Hamas views Fatah as weak, and unapologetically supports violent jihad to destroy the Jewish state.
Experts on Palestinian relations, such as IDF Col. (res.) Grisha Yakubovich, a senior fellow at the MirYam Institute, believe that Hamas is making a play to win over Palestinian hearts and minds in Judea and Samaria by criticizing Fatah for ineffective diplomacy and fruitless negotiations.
Yakubovich believes the Palestinian street sees Hamas laying the ground for "a repeat of their 2007 takeover of Gaza--this time in Judea and Samaria."
Suffice it to say, Hamas's attacks on Israel in recent years from its Gaza stronghold has kept the Jewish state on edge--both militarily and in terms of world opinion.
But Hamas in control of large sections of Judea and Samaria, directly on long stretches of central Israel's eastern border, including those of its capital, Jerusalem--would raise the stakes dramatically.
Let's not forget, either, that global terror giant Iran is one of Hamas's greatest funders.
While President Biden and his diplomats may give incessant lip service to a two-state solution, they're surely not about to send U.S. troops to defend the Palestinian Authority from a Hamas takeover. Abbas's Fatah cronies will be summarily abandoned by their Western "friends."
In fact, clearly Israel would by far be the most highly motivated--life-or-death motivated--to stop such a coup d'etat.
Israel would face the ugly choice of fighting and crushing such a Hamas putsch at the moment it is launched ... or beginning its defense after Hamas sets up its missile launchers just a few miles from Israel's heartland, where some six million of its 9.5 million people live.

In short, a Hamas seizure of large parts of Judea and Samaria would be a disaster for Israel--and for the world. Remember, Hamas's charter explicitly calls for the murder of Jews and destruction of the Jewish state. The myth of the peace-loving Palestinians would be quashed, possibly forever.
With Hamas on its eastern borders, Israel would be put on a constant--day in, day out--war footing. Missiles, including those aimed at Israel's Ben Gurion Airport, would be a daily threat all year long. Hamas terrorists would be able to infiltrate and commit daily murders in Israel's heartland.
Israel's defense against such Palestinian terror in its backyard would inevitably be a ground war, with all that entails.
How is the two-state solution looking so far in this scenario? Since a Hamas takeover of Palestinian-controlled territory seems entirely likely--far more likely to succeed than Russia's recent attempt to annex parts of Ukraine--it would be nice to hear two-state advocates defend their proposal under these circumstances.
Those who advocate a two-state solution must first explain how a Hamas takeover will be prevented. If it can't be prevented, how do they see two states being achieved between Israel and the designated terror group Hamas?
Above all "the two-state solution" can't just be a political fantasy. This is real life. These are murderous enemies of Israel ... and of all who love peace and freedom. If you advocate a two-state solution, you owe the world real-life answers.
Originally published at JNS.org - reposted with permission.