To Nuke Or Not To Nuke? What Will Putin Do? 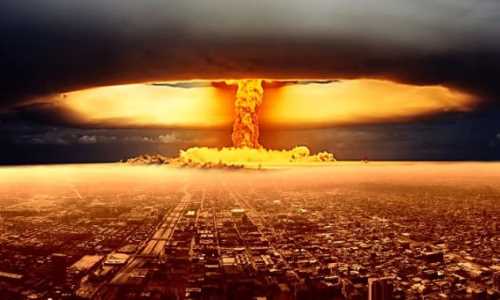 By Lt. Gen. (Ret.) William G. Boykin/The Washington Stand October 07, 2022
Share this article:
On September 30, Russia's President Vladimir Putin declared once again that he would use "all available means" to defend Russian territory. The New York Times reported:
Mr. Putin reminded the world of President Harry S. Truman's decision to drop atomic weapons on Hiroshima and Nagasaki, Japan, 77 years ago, adding, 'By the way, they created a precedent.' On Saturday, the strongman leader of the southern Russian republic of Chechnya, Ramzan Kadyrov, said Mr. Putin should consider using 'low-yield nuclear weapons' in Ukraine, becoming the first prominent Russian official to openly call for such a strike.
With this latest threat in mind, it is noteworthy that days before Russia's initial invasion of Ukraine in February 2022, President Vladimir Putin was personally overseeing military exercises with Belarus -- exercises that were blatantly nuclear in nature.
On February 18, Belarus President Alexander Lukashenko announced his willingness to join Vladimir Putin in strategic nuclear drills, a day after annual strategic drills of nuclear-capable missiles were to take place "under the supervision of Russian armed forces supreme commander-in-chief, Vladimir Putin."
Those well-publicized nuclear exercises happened just six days before Russia's invasion of Ukraine, launched on February 24. At the time, Putin authorized "special military operations," and Russian forces began missile and artillery attacks, striking major Ukrainian cities including Kyiv.

The earlier military exercises in Belarus -- which flaunted nuclear capabilities -- was Putin's way of psychologically preparing his enemies for the Ukraine invasion. In the weeks and months to follow, he has repeatedly employed nuclear threats and insinuations to bolster his power. Notably, he has immediately put those nuke threats to use when things aren't going his way.
Putin has continued to use such words as "escalating" and "provocative" to describe Ukraine's military operations, intentionally triggering fears of his own potentially deadly responses. And while many observers have implied that Putin is bluffing about nukes, or that he would not dare to use the weapons he has at his disposal -- both strategic and tactical -- Putin's threats should be taken seriously.
There are three countries concerned with this conflict that have both strategic and tactical nuclear weapons: Britain, France, and the United States. If Russia employed any kind of a nuclear weapon in a NATO or EU country, or close enough to a border to cause harm, that action would activate NATO Article 5: all NATO countries are obligated to respond in unity when one is attacked. Putin knows this would instigate a nuclear response.
The only time Article 5 has been invoked was in September 2001, following the 9/11 attacks on the United States. Likewise, if Russia initiated a nuclear attack on Ukraine, due to the proximity of several NATO countries' vulnerability to radiation fallout, a collective defense would be unique and enduring. In fact, it would be the preferred course of action.
First of all, it is obvious to all concerned -- including Vladimir Putin -- that the use of a strategic nuclear weapon would lead to the destruction of Moscow, followed by an unimaginable conflict costing the lives of millions around the world. And Putin knows that nobody would win.

But what about the use of a tactical nuke? These are weapons for localized use, targeting military formations, ammunition depots or command and control centers. They would be launched by use of bombs, short-range missiles, artillery tubes, land mines, depth charges, and torpedoes equipped with nuclear warheads.
"If the Russians have it in their arsenal as a conventional weapon, you can be pretty safe in assuming it has a nuclear warhead that goes with it," said an unidentified former senior National Security Council official, who still advises U.S. Strategic Command. "Almost every single weapon the Russians have is nuclear-capable. If it's an artillery system, if it's an air-defense system, if it's a torpedo, if it's a cruise missile, it could have a nuclear warhead with it."
So, would Putin launch such an attack? And if he wanted to, would the people around him permit him to do so? They know what is at stake also and have a lot to lose in a conventional nuclear exchange. What about the oligarchs that support Putin, who are also wealthy people with interests of their own? Could they stop him?
The fact is that if Putin uses any kind of nuclear weapon -- even a tactical one -- the war is over and he will have lost. The use of tactical nuclear weapons would most likely cause the drift of radiation across borders into NATO countries. This would prompt an immediate Article 5 response. Subsequently, faced with a combined force of NATO assets -- a missile and/or drone attack along with the massive use of conventional weapons dropped from NATO aircraft -- Putin's army would be pulverized, including his army in Crimea.

Russia has 4,477 total nuke warheads. Among those thousands, we know that some 1,900 are tactical, low yield and not strategic. They could be used to attack a column of tanks, an aircraft carrier group, or many other specific targets. Meanwhile, 600-800 are strategic and could destroy entire cities. Putin clearly has weapons available to him. But is it credible that he would actually use a nuke? Or, as many hopefully imply, is he bluffing?
It is clear that in the days before he officially launched his Ukraine invasion, Putin made specific and intentional preparations to upscale his image as a nuclear player. He did so fully intending to intimidate the west with potential Russian nuclear activity. The military Belarus exercises were blatantly nuclear in nature, providing Putin with a means of bullying and otherwise threatening his foes with devastating destruction -- which he has continued to do. But again, is this just part of his propaganda campaign?
Today we know little about Putin's present state of mind or level of emotional vulnerability. How desperate might he become as he watches failure after failure of his once-vaunted army and his supposedly invincible battle plans?
The best we can do now is continue to protect Ukraine. Because, despite his saber-rattling and nuclear warnings, it is likely Vladimir Putin would make careful calculations before taking such dire action. If not, he surely knows that he will be faced with non-stop retaliation and unimaginable destruction.
Originally published at The Washington Stand - reposted with permission.